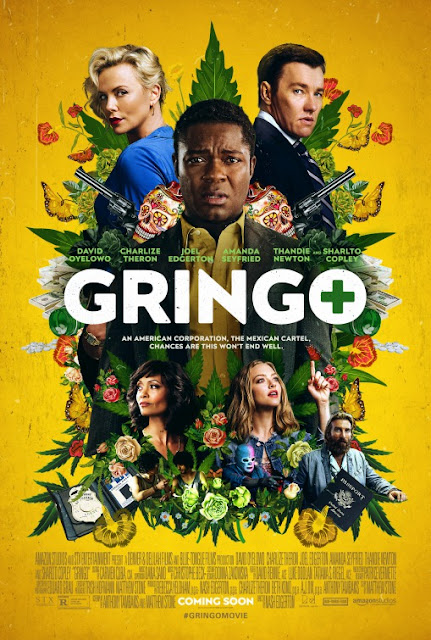 Gringo is trying to be something different. Writers Anthony Tambakis & Matthew Stone and first-time feature film director Nash Edgerton clearly want Gringo to be a dark comedy occasionally interrupted by brief bits of action that has a glib view of the morality of the rich and powerful and has a sad-sack everyman protagonist that Jimmy Stewart would have played once upon a time. That's an unorthodox mixture of elements to put into one movie and that audacious spirit is to be admired. But in executing such a unique concoction, Gringo, unfortunately, winds up as a misfire, commendable artistic intentions can't mitigate the tiresome scattered nature of this project.


Our lead character for Gringo is Harold (David Oyelowo), who works for a big pharmaceutical company that's apparently about to undergo a merger that will result in numerous jobs being lost, with Harold being one such casualty. His boss, Richard Rusk (Joel Edgerton), pretends to be chummy with Harold, but in private is ready to cut Harold loose. Before that inevitable firing though, Harold, with Richard and fellow bigwig Elaine (Charlize Theron) in tow, makes a trip to his companies manufacturing plant located in Mexica. It is on this trip that Harold finally learns that not only is he about to be fired, but that Richard and Elaine despise him.

A forlorn Harold, who also learns that his wife, Bonnie (Thandie Newton), is cheating on him, decides to stay behind in Mexico, where he gets the idea to fake a kidnapping just as a big-time Mexican cartel boss decides to stage an attack on the plant Harold's company houses in Mexico. The whole story is focused on these kinds of situations where individual character motivations unwittingly bump into one another. A handful of amusing gags and story beats can be found in these scenarios motivated by individual selfish desires, but the main issue with Gringo is how the story becomes too absorbed in establishing various subplots that just aren't all that interesting to watch.

The viewer repeatedly gets to see the goings-on of a British guitar store employee and his girlfriend (played by Amanda Seyfried) traveling down to Mexico to pick up some drugs in need of transporting, Elaine has her own storyline fixated around her relationship with Richard, a guy who's also looking to hire his brother (played by Sharlto Copley) to track down Harold, obviously, the story gets way too scattered for its own good. Hopping around from one storyline to another wouldn't be an issue if the individual subplots were interesting, but despite the participation of talented actors like Amanda Seyfried and Charlize Theron, they're really not, and the pay-off occuring in the minimal amount of instances various individual storylines do cross-over into one another is nowhere near good enough to justify the preceding instances of messy storytelling.

Gringo's decision to jump all around to various storylines would probably work better if only either the comedy or characters were more engaging, but neither element manages to work as well as it should. The monotonous storyline Seyfried's character is trapped in feels especially extraneous since she isn't given any kind of well-defined person to portray nor any memorable jokes to deliver. At least the storyline involving Sharlto Copley's character is the best of the assorted subplots simply because of Copley's usual gusto-style of acting. If something like Tampopo shows how to properly create a cohesive narrative that contains numerous storytelling digressions, Gringo shows how not to approach this method of storytelling.

The cluttered plot kneecaps Gringo as a whole while similarly frustrating in its writing is its tidy happy ending that doesn't fit at all with the glip story it's capping off. Even amidst a messy narrative, at least David Oyelowo provides a fun lead performance as a guy whose string of bad luck seems to be never-ending and director Nash Edgerton provides some decent, though not especially noteworthy, work behind the camera. If only the aspects that do work about Gringo were able to be paired up with a story that wasn't such a flat-out mess. Gringo is certainly trying to be something different, but did it also have to try so hard at being disorderly and unengaging?
Posted by Douglas Laman (NerdInTheBasement) at 1:31 PM