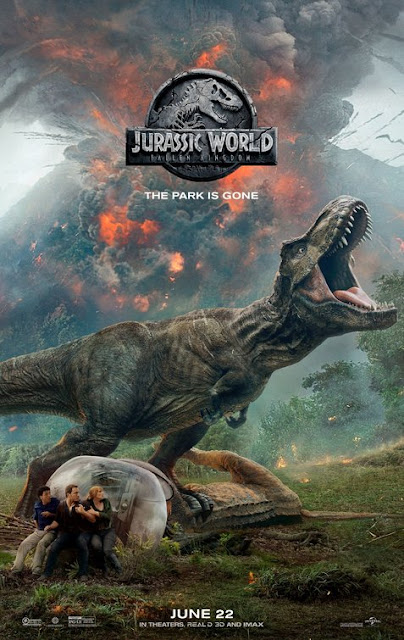 I sure do hope anyone who goes to see Jurassic World: Fallen Kingdom is familiar with every little detail of the original Jurassic Park film because this movie is obsessed to a creepy degree with homaging that particular entry in the franchise. All kinds of nostalgic fan-service moments crop up throughout the story, ranging from an appearance by the cane topped by an ambered mosquito that John Hammond once carried around to an appearance by the flipped over Jurassic Park van that fell into the T-Rex paddock to a comically extraneous cameo appearance by Dr. Ian Malcolm (Jeff Goldblum). Colin Trevorrow and Derek Connolly pack their dismal script with all kinds of references to the original, a task they become so preoccupied with that they forget to make all that much that is unique or interesting for this brand new Jurassic Park adventure.


For this particular entry in the dinosaur saga, Claire Dearing (Bryce Dallas Howard), who has become an activist for dinosaurs since the events of Jurassic World, has been hired by Eli Mills (Rafe Spall), to lead an expedition to help rescue the dinosaurs located on the island of Isla Nublar from a recently re-awakened volcano. Dearing manages to convince ex-lover Owen Grady (Chris Pratt), who is needed to help retrieve his old raptor pal Blue, to come along and help them out and they're all soon back on the island in a race against time to save the dinosaurs, a mission that becomes complicated when it turns out there may be more nefarious purposes for why exactly the dinosaurs are being rescued.

To watch Jurassic World: Fallen Kingdom is to watch a tug-of-war transpire between the memorably grandiose direction courtesy of J.A. Bayona and the dismal writing of Trevorrow and Connolly that's as intense and fierce as when those two T-Rexes fought over Richard Schiff's body in The Lost World: Jurassic Park. On the one hand, J.A. Bayona's ability to conjure up eye-catching visuals from his work on The Impossible and A Monster Calls is certainly around here, scenes showing the ash and lava of the volcano engulfing the island of Isla Nublar are framed in expansive wide shots that allow the scale of this natural disaster to be felt in a way that emanates a sense of haunting beauty. The all too few scenes where Fallen Kingdom opts to have a horror movie vibe also show Bayona excel as a visualist, no surprise there since that's the genre he cut his teeth on and first garnered acclaim for as a filmmaker.

An opening scene showing a T-Rex getting closer and closer to her human prey during a lightning storm has a playful quality to it that shows that Bayona knows how important a sense of theatricality is to nailing moments meant to instill terror in the viewer. Similarly, Bayona films climactic sequences depicting the nefarious Indoraptor (which is a fun-looking dinosaur in its design) hunting down human characters in a slower manner that allow tension to nicely build up. Of course, the tension would be higher if the human characters were worth giving a damn about and that's where the script becomes a problem; Bayona is doing some awesome work behind the camera here, but all the pretty pictures in the world can't salvage these crummy protagonists.

You'd think the fifth Jurassic Park movie would realize that audiences are here for the dinosaurs and nothing else and why wouldn't they? The minimal amount of scenes in Fallen Kingdom centered on just the dinosaurs, especially a scene showing one irritated dino attacking a room full of rich snobs, are awesome! But such scenes are few and far between as the audience gets stranded instead with some truly tedious human characters, with Owen Grady especially being a boring individual that never gets the chance to utilize Chris Pratt's skills as an actor and a whole host of actors (namely James Cromwell) getting wasted in superflous supporting roles. We don't even get a fun one-note bad guy (think Malin Akerman in Rampage or Eddie Redmayne in Jupiter Ascending) in this movie, instead, we get Rafe Spall droning on and on about a generic evil plan he's looking to execute.

If we were going to get such thinly sketched characters taking up the majority of the screentime in Jurassic World: Fallen Kingdom, couldn't such characters be lively in how they're written or were the writers too worried an entertainingly bombastic villain might distract the audience from noticing Jurassic Park Reference #45? I guess it's much easier to just regurgitate things that have worked before (like the T-Rex roaring triumphantly like she did at the end of the first Jurassic Park, they repeat that twice here) rather than exerting energy on making new loveable characters or even just fun action movie silliness. All of these story flaws are already enough to make the screenplay for Jurassic World: Fallen Kingdom a calamity and that's before we get into key issues in its story structure, namely in how good guys turn right around to reveal themselves as bad guys in such a quick fashion so that such heel turns never manage to have their intended impact.

A sense of staleness found in abundance in the screenplay ends up permeating a number of crucial aspects of the film too, including the CGI visual effects used for the dinosaurs, which look better than they did in Jurassic World (the dinosaurs usually look like they belong in their live-action environments this time around), but anytime practical dinosaurs are used, the more natural way the actors interact with these tactile animatronic dinosaurs ends up reinforcing the artificiality of the CGI dinos. Even composer Michael Giacchino, one of our best composers working right now and who can usually be counted on to deliver memorable music for even the most disposable blockbuster fare, seems to be on autopilot here creating one his more erratic and forgettable scores for the production.

I love the original Jurassic Park, it was one of my first Steven Spielberg movies, it blew my mind when I first watched it, it still holds a mighty special place in my heart. It seems like writers Colin Trevorrow and Derek Connolly share my adoration for that film, but I wish their love for Jurassic Park spurred them to create storytelling as fresh and exciting as that 1993 masterwork instead of just shoving in elements of that film into Jurassic World: Fallen Kingdom for the sake of empty nostalgia. J.A. Bayona's more distinctive and occasionally atmospheric direction can't salvage the terrible screenplay he's working with, resulting in a film that's akin to Kid Rock's All Summer Long, a hodgepodge of references to well-liked things that already exist and wholly new things that are uniformly terrible.

P.S. The only fun human being performance in this movie comes from Ted Levine, who gets stuck with some of the worst dialogue in the entire screenplay yet manages to deliver an endearingly goofy performance that has Levine playing his evil mercenary character in a manner evocative of how he'd portray an evildoer if he was playing with his grandson. It's a performance that actually has some personality to it, a rarity in Jurassic World: Fallen Kingdom.
Posted by Douglas Laman (NerdInTheBasement) at 10:03 AM