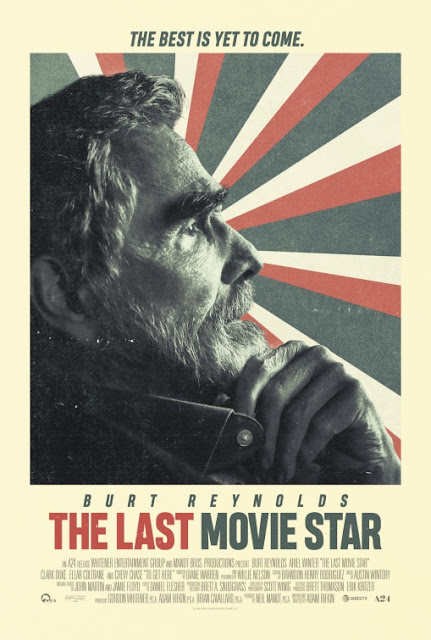 Burt Reynolds has been such a prominent figure of American cinema for so long now that it's easy to see an emotionally affecting movie being made out of Reynolds taking a wistful look at his career. But The Last Movie Star is not the thoughtful career retrospective Reynolds deserves, instead being something more akin to that dreadful first Expendables movie than Unforgiven in terms of quality. Writer/director Adam Rifkin delivers a story that's aiming for thoughtfulness but ends up being far too conventional and surface-level for its own good, with its most memorable traits being distracting oddball traits of the project, most notably in that Burt Reynolds is kind of sort of playing himself here.

Technically, Reynolds is playing the character of former big-shot movie star Vic Edwards. It's common for real-life actors to play fictional actors that are pastiches of themselves, but Vic Edwards is an odd exception because he's apparently just Burt Reynolds in the alternate universe of The Last Movie Star. He too starred in Smokey And The Bandit, laid out nude on a bear-skin rug in front of a roaring fireplace and apparently an IMDB page for Vic Edwards that a supporting character looks at refers to Edwards as Burt Reynolds. Heavy emphasis is paid on the fact that Edwards and Reynolds are one and the same, to the point that there are dream sequences where Edwards is inserted into footage from classic Reynolds movies so that he can interact with his younger self.

This isn't an inherently bad element, but it is an odd detail that feels like it traps the lead character in a weird zone between not really being fully a commentary on Burt Reynolds as a person while ensuring that Vic Edwards can't establish himself as his own individual fictional human being.  Plus, if they were gonna utilize actual movies Reynolds had been in, I wish they had had more fun with incorporating the expansive filmography of Burt Reynolds, like having Vic Marrow encounter a super-fan of his work in Without A Paddle. If this sounds like a trivial detail of The Last Movie Star to get hung up on, maybe it is, but it's certainly more interesting than most anything else in the rest of the movie, which is your typical cranky old person learning to appreciate life again story told in a paint-by-numbers fashion.

Vic Edwards fills in the cranky old person role, with the curmudgeon nature of Edwards being informed by past regrets and pervasive reminders of his mortality. One day, he receives an invite to receive a lifetime achievement award at a Knoxville, Tennesse film festival, a prospect he has misgivings about but decides to go along with in hopes that it can provide a boost to his life. The film festival turns out to be far less glamorous than advertised, however, and just ends up reinforcing the cranky side of Edwards more than anything else. However, Edwards is a native of Tennesse and decides to take his foul-mouthed driver Lil (Ariel Winter) on an unplanned tour of important places from his past, an endeavor that might just bring him internal peace after all.

The premise for The Last Movie Star is so corny that it might as well be a pile of maltodextrins, but such a story could easily have been livened up with some entertaining characters. Sadly, The Last Movie Star populates its premise with lazily-written individuals, with Vic Edwards himself coming off as the off-brand version of Carl Fredrickson from Up in his "best" moments while the big emotional scenes for his character are too generic, making it hard for one to get invested in the walk down memory lane Vic Edwards is going down, though there is a third act monologue about mortality that Burt Reynolds delivers nicely. Meanwhile, the various millennials running the film festival, who talk in hashtags and social media buzzwords, feel like what a 50-year-old whose only exposure to millennials is through Fox News must think millennials are like. Worst of all though is the character of Lil, a foul-mouthed companion to Vic Edwards who has suffered from an assortment of mental health problems in the past.

The feature seems to have only the vaguest understanding of how mental health issues actually work (why else would the film treat Vic Edwards saying depression can be easily conquered "if you're a fighter" as some sage advice?), which adds a really ignorant layer to what's mostly just a humdrum generic film. When the script isn't handling Lil's mental health problems in a poor manner, the character is stuck in a lame character arc culminating in her character finding salvation in the affections of a dude (played by Ellar Coltrane from Boyhood) who's been pining for her for years. It's a real shame Lil is such a poorly developed character because Ariel Winter delivers some interesting work in the role. But like so much of The Last Movie Star, she's let down by a script that too often goes for what's conventional instead of what's interesting or thoughtful.
Posted by Douglas Laman (NerdInTheBasement) at 10:47 AM