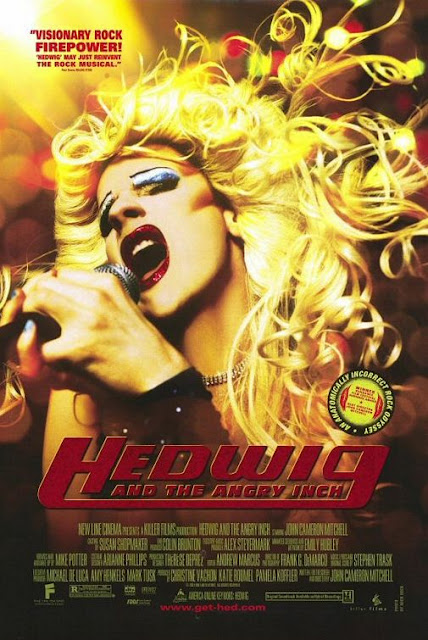 The early years of the 2000's saw the musical, a genre that had long been seen as over-the-hill, make a big mainstream comeback in American cinema thanks to Moulin Rouge! and especially Chicago, but woe to those who forget to also credit John Cameron Mitchell's Hedwig and the Angry Inch for helping the musical get revived as a high-profile subgenre for the 21st century. Sure, Hedwig and the Angry Inch was a box office non-starter compared to the likes of Chicago, but the movie was awesome and it managed to garner the loyal following it deserved in the years after its initial theatrical release.


Hedwig and the Angry Inch chooses to employ a large number of its musical numbers through performances of Hedwig's (John Cameron Mitchell) band, a tactic that many musicals made in the 21st century (though this is certainly a device that was employed in decades past) use to help soothe audiences into the idea that they're watching a musical by providing an in-movie excuse for why characters keep singing and dancing. Whereas something like Clint Eastwood's Jersey Boys (remember that?) may use this technique to seemingly assure moviegoers they're not really a musical, Hedwig and the Angry Inch has Hedwig and her bandmates deliver raucous tunes on-stages that are full-blown musical numbers through and through while more traditional examples of musical numbers emerge in sequences like the phenomenal Wig In A Box tune.


These performances by Hedwig and her band not only provide the majority of the musical numbers of Hedwig and the Angry Inch, they also help establish the backstory and desires of its lead character. Hedwig started out her life as East Germany resident Hansel Schmidt, a boy obsessed with rock n' roll who ended up growing up into a teenager who fell in love with an American general in a doomed romance that led Hansel to the United States of America. Hedwig narrates these flashbacks establishing her past, with her one-of-a-kind personality coming through in her wonderfully colorful dialogue ("[I left] behind a trail of rainbow carnage!" is such a gloriously written phrase) which has been penned by John Cameron Mitchell and Stephen Trask (both of whom are adapting a musical they also wrote).

Mitchell and Trask seem to be having a blast writing a character like Hedwig who's so contemptuous of authority and those, like ex-boyfriend Tommy Speck (Michael Pitt) turned famous rocker, who have double-crossed her but the duo's writing don't just supply Hedwig with memorable retorts or excellently written musical numbers. Through the assorted flashback scenes and show tunes, we get to learn about how Hedwig is yearning for personal happiness by way of finding another human that can serve as her "other half", an internal predicament that gets especially highlighted in the excellent tune The Origin of Love. Her desire to find a way to embrace herself serves as a fascinating emotional crux for Hedwig and the Angry Inch and its most enthralling musical numbers, including the aforementioned Wig In A Box.

Though there are numerous superb songs to be found in Hedwig and the Angry Inch, Wig In A Box is easily the film's best tune. What 'S Wonderful is to An American In Paris, Audition is to La La Land, Wig In A Box is to Hedwig and the Angry Inch in that it's both the best song of the entire movie and it's also a microcosm of the various themes of the larger musical it inhabits. Most notably in terms of tying into larger thematic material in the film, Wig In A Box provides a wonderful music-based example of how the character of Hedwig defines herself by how she overcomes personal tragedies rather than having those personal tragedies. Plus, in terms of simpler but no less delightful surface-level pleasures, the gradually increasing sense of energy in this song is totally irresistible, just try not to sing along when Hedwig and her bandmates implore you to do just that.

Hedwig and the Angry Inch is absolutely brilliant at using insanely catchy showtunes to deftly explore its lead character which makes it peculiar that the weakest point of the movie comes in a dream sequence climax dedicated to exploring Hedwig learning to accept herself. Not a bad way to end the movie conceptually, but the fact that the majority of the climax is focused on Hedwig in her original male identity is certainly odd. The whole rest of the movie has been about Hedwig embracing herself, emphasis on the word her, so to suddenly turn the spotlight on almost entirely Hansel means this ending feels highly disconnected from what has preceded it. A real shame Hedwig and the Angry Inch couldn't get the kind of exceptional ending it deserved, but at least the rest of the movie, a head-banging musical ode to self-acceptance, is as massively enjoyable as feeling like Miss Farah Fawcett from TV.
Posted by Douglas Laman (NerdInTheBasement) at 12:09 PM