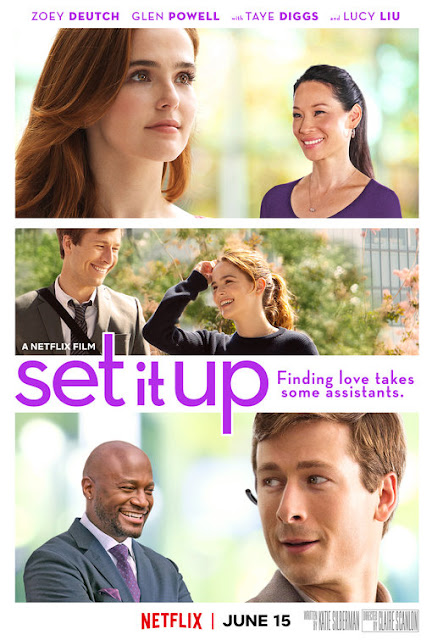 Netflix is coming up on the third year anniversary of their big push into creating original films, an initiative that began with Beasts of No Nation. In that time, Netflix has gotten a whole bunch of movie stars like Brad Pitt and Will Smith to headline their various high-profile motion pictures, but aside from Bright (which really became more of a cosplay staple and internet punching bag than anything else), none of these movies have really garnered all that much attention, a pity for gems like Blue Jay, Mudbound or 6 Balloons. But two weeks ago today, Netflix released their first original film to really take the public by storm and it was one not based on exceptionally well-known source material or starring big names or even carrying a bunch of splashy visual effects.


Instead, it was a low-key romantic-comedy directed by Claire Scanlon by the name of Set It Up, one that was given little to no pre-release marketing, yet has managed to become the first one of these Netflix movies that actually has had the general public talking. And why wouldn't it be generating conversation? It's a breezy and enjoyable feature, one that knows how crucial it is to get entertaining lead actors who share engaging chemistry if you want your romantic-comedy to work. Such chemistry is certainly around whenever Zoey Deutch and Glen Powell are sharing the screen as overworked assistants who want to play Cupid by helping get their bosses together.

Why would they do this? Well, both of them really just want some time to themselves and once their superiors (played by Lucy Liu and Taye Diggs) are more infatuated with each other than barking orders at their assistants, well, suddenly the schedules for both of our lead characters become far more wide open. Set It Up then follows Deutch and Powell's characters as they try to play matchmaker and the ever-evolving dynamic between their characters as their bosses become closer and closer. The premise of two lead characters trying to set up two other characters as a romantic couple has certainly been done countless times (I remember seeing it a bunch in animated kids shows like Brandy & Mr. Whiskers when I was younger) but the endearingly lighthearted spirit of Set It Up helps keep it from feeling entertaining rather than stale on a narrative level.

Katie Silberman's screenplay, right from the get-go in its opening scenes, decides to be a zesty motion picture emphasizing comedic interactions and the growing possibility of blossoming love above all else. Its priorities are clearly set in place from a storytelling level right off the bat and while Silberman's writing has its share of flaws, like a handful of extraneous scenes and a relationship between Powell's character and a thinly-sketched model that feels too predestined to go nowhere, the script is overall well put-together and carries a confident air that permeates the rest of the project, including director Claire Scanlon who has a similarly assured spirit in how she executes this premise.

Said premise gets a lot of mileage out of repeated witty back-and-forth dialogue exchanges Zoey Deutch and Glen Powell, the two best parts of the film by a long shot. This Everybody Wants Some!!! reunion finds Deutch and Powell sharing delightful chemistry in their scenes together that smartly decide to hew back to classical romantic-comedies by actually making our two lead characters, well, characters, ones with personalities that can be fun to watch clash up against one another. That's not the only way Set It Up evokes delightful older entries in the romantic-comedy genre, Powell especially, with his good looks, sharp comedic timing and charisma, seems to have been ripped right out of the quintessential portrait of a Hollywood leading man circa. the 1930's or 1940's.

Deutch, with her love for pizza and aspirations for a career in online sports writing, channels a more modern sensibility in her performance that works nicely as a contrast to Powell as well as just an entertaining personality in her own right. Between her charming as heck performance in Set It Up and her memorable work in Before I Fall last year, Deutch is really garnering a solid resume early on in her career. She and Powell serve as the best element of Set It Up, but delightfully, the cast is filled with some small delightful supporting performances (like Titus Burgess as a maintenance man who gets one of the best lines of the film) as well as an excellent turn by Lucy Liu who just sinks her teeth into this role to glorious results. With a cast this delightful working with a script that knows just what it wants to be, Set It Up ends up being a real treat. More movies like this Netflix and way less like Game Over, Man!, please and thank you.
Posted by Douglas Laman (NerdInTheBasement) at 12:27 PM