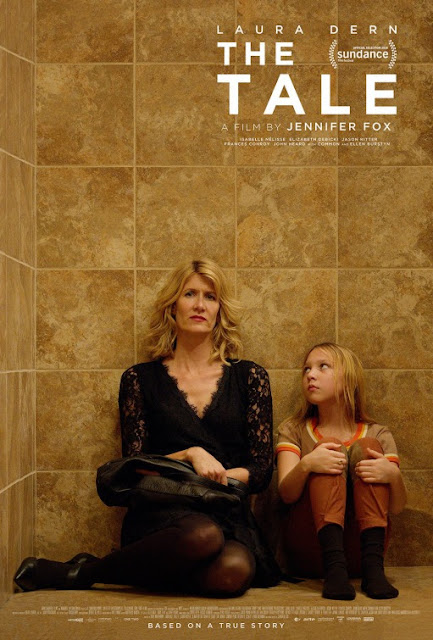 Everyone puts a piece of themselves into the art they create, frequently in a subconscious manner. Your likes and dislikes in all sorts of areas of your life find a way to be subtly imprinted on the art you create, though many artists go even further this and create works that intentionally reflect their own lives and experiences. Jennifer Fox has gone this particular route in directing the motion picture The Tale, which chronicles her process of coming to terms with the fact that she was sexually abused as a child. Her cinematic depiction of this event is so tied into reality that the main character isn't given a pseudonym, lead actor Laura Dern simply plays Jennifer Fox herself (though there text at the start of the end credits that does clarify that certain names and locations have been changed for this motion picture).


As we start The Tale, Jennifer Fox is living a comfortable life as a professor and a documentarian that gets interrupted by a phone call from her mother, Nadine (Ellen Burstyn), who just found an assortment of letters from a man, Bill Allens (Jason Ritter), Jennifer had a relationship with in her younger years while attending a summer camp presided over by Mrs. G (Elizabeth Debicki). Fox has fond memories of this affair, but those memories of hers do not line up with reality. As Fox begins to dig deeper into this affair, she soon realizes her idyllic recollection of these events has been covering up trauma she experienced as a young girl who was molested by adults she thought she could trust.

The dissonance between Fox's halcyon recollections of the relationship she had with Allens and Mrs. G and the disturbing reality of that relationship is depicted in The Tale in a way that allows us to travel inside Jennifer Fox's mind and see what a disorienting experience it is to have reality upend your own memories. The way small details in Fox's memories that she thinks of fondly vanish in the blink of an eye once the reality of those memories is established is a recurring motif in The Tale that constantly incites a sense of unease in the viewer. We take for granted that we should be able to trust our own minds, but the process of coping with abuse reveals just how complicated our brains, as well as functions of our brain like memories, can be.

Coming to terms with how not only events but entire people she trusted were not at all what she thought they were for decades is something that throws Jennifer Fox's world upside down and the script (penned by Fox) offers plenty of opportunities to examine various facets of the complicated experience she's going through. Watching the character of Fox vehemently deny to her husband (played by Common) that she's a victim in these circumstances or another sequence depicting her trying to craftily gather information out of an elderly Mrs. G provide different glimpses into what differing sides of Fox's personality are emerging in response to coming to terms with long-repressed sexual abuse.

Such responses allow for Jennifer Fox to become a realistically highly complicated character that Laura Dern excels at portraying. Dern is utterly remarkable in portraying this multi-faceted real-life individual, particularly in echoing the writing in imbuing a sense of realism into her staggeringly powerful performance. Just the way she portrays Fox trying to still live on in her day-to-day life while still trying to get answers, frequently to no avail, about this experience of repressed childhood abuse is devastating to watch. There's a similar level of power conveyed in Dern's work in a recurring aspect of The Tale that, in a clever way to tie in Fox's work as a documentarian, sees's an off-screen Jennifer Fox conducting fictional interviews with the likes of Mrs. G and Bill Allens as she probes them with questions she wishes she could ask them in real life.

Dern isn't even on-screen here but she manages to convey a haunting quality in her vocals as she vocalizes queries that have been, unknowingly, lying in her own head for decades. Laura Dern isn't the only casting here that proves to pay off immensely within the story, having Elizabeth Debicki and Jason Ritter play the two people responsible for molesting a young Jennifer is also a smart casting move not only because both of them (especially Debicki) do strong work here but also because of the fact that neither of them fit the typical physical profile of what Hollywood considers to be a sexual predator. Normally such roles are filled by actors who immediately look grimy or untrustworthy, whereas here Debicki and Ritter look like picture-perfect portraits of wholesomeness.

By upending that casting convention for sexual predators, The Tale implicitly conveys the important idea that sexually abusive human beings can come in any physical form. The Tale is not about adhering to typical ideas in Hollywood productions about what the experience of coping with sexual abuse is but rather a realistic take on this topic through a depiction of Jennifer Fox's individual experience with coming to terms with her own childhood sexual abuse. Pairing up a magnificent lead performance from Laura Dern with Jennifer Fox's superb writing and exemplary directing means The Tale carries a sense of introspective emotional weight that allows both its lead character and her psychological turmoil to be fully realized.
Posted by Douglas Laman (NerdInTheBasement) at 12:48 PM