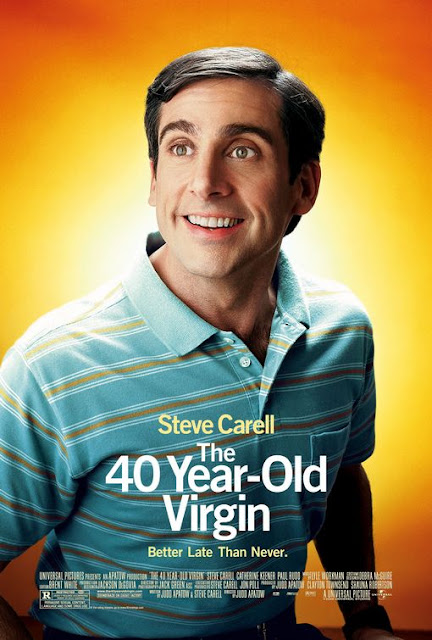 There was a time when Steve Carell wasn't a movie star. Prior to August 2005, Carell, who had previously appeared in a number of scene-stealing roles in movies as well as starred in a handful of episodes of the American version of The Office, had never headlined a major feature film prior to The 40-Year-Old Virgin while writer/director Judd Apatow had been cutting his teeth on an assortment of cult classic TV shows up to this point. But with this raunchy comedy, both of them managed to spring to the very top of the A-list and proved to be one of the most influential forces in early 21st century American cinematic comedy, with their impact still being felt in movies made to this very day.


And all of that large amount of comedic influence began with the ballad of Andy Stitzer (Steve Carell), who, in case you couldn't tell by the title, is a 40-year-old man who is also a virgin. Stitzer is a socially clueless guy who prefers his action figures and video games to actually getting out and interacting with other people, let alone women he might want to be romantic with. Once his co-workers, two of which are played by Seth Rogen and Paul Rudd, find out that he's never had sex though, they decide to do whatever it takes to help Stitzer pop his cherry. Pushing him outside of his comfort zone isn't going to be easy, but with a little bit of luck, maybe Stitzer will grow as a person through this sexual process.

This is a story ripe with opportunities for comedy, but surprisingly, The 40-Year-Old Virgin has a better batting average in its moments of romantic drama than in its attempts at comedy. Like most, if not all, of Judd Apatow's works, The 40-Year-Old Virgin is a raunchy movie full of man-child humor that also is very serious about concepts like growing up or embracing commitment. The more serious side of The 40-Year-Old Virgin works as well as it does because of Carell, who also wrote the movie with Apatow in addition to starring in it. Carell foreshadows his successful rise into dramatic acting in the level of realistic commitment he brings to the part of Andy Stitzer, a character he plays as a person, not a caricature.

Carell makes the awkwardness that Stitzer constantly exhibits humorous but also endearingly relatable, Lord knows I recognized myself in bits and pieces of his socially clumsy behavior. Carell's decision to portray Stitzer as a person you can actually get invested in means the moments of pathos fixated on Stitzer in the climax actually have real emotional heft to them, to the point that I even got choked up in a post-bicycle accident conversation his character has with his love interest played by Catherine Keener. Steve Carell and Judd Apatow recognize in their work together as writers as well as in their individual duties on this project that the story of Andy Stitzer is one that can generate yuks as well as genuine emotional investment from the viewer.

By contrast, the comedy here is more scattershot in terms of its ratio of successes to misfires. To be sure, there are numerous moments of hilarity to be found here, many of them emerging from, like the best dramatic moments, Steve Carell's performance. However, The 40-Year-Old Virgin finds itself torn between wanting to make a story about the importance of growing up and also wanting to just focus on Seth Rogen and Paul Rudd exchanging extended pieces of improv about their genitalia or sexuality. The 40-Year-Old Virgin wants to use Stitzer's co-workers as examples of how immature behavior towards women leads to emptiness while at the same time reveling in said immature behavior as a constant go-to source of comedy.

It's a weird contradictory element of the project that undercuts the core moral it wants to impart to the viewer, a situation akin to the director of Bloodfreak talking to the audience about the dangers of chemicals and drugs while puffing away on a cigarette. The immature comedic tendencies of The 40-Year-Old Virgin tend to get in the way of the story of growth it wants to tell with the character of Andy Stitzer, but thankfully, there are other pieces of comedy in the film that prove to be far more successful in execution. Plus, at least the dramatic parts and the main performance of The 40-Year-Old Virgin are around to help compensate for its sometimes lackluster comedic sensibilities.
Posted by Douglas Laman (NerdInTheBasement) at 11:34 AM