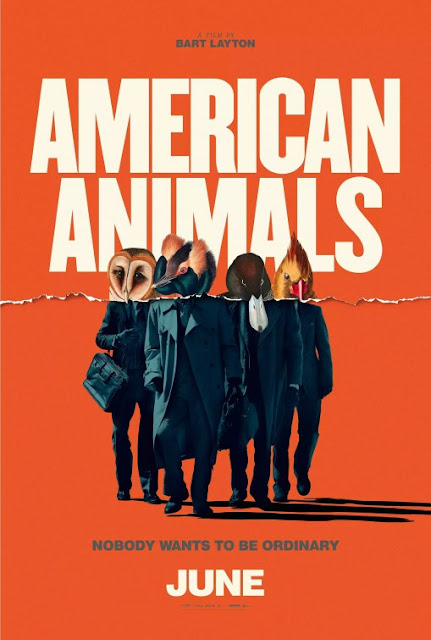 When plotting out how to do American Animals, one must imagine the creative personnel involved in this project were torn between doing a documentary or a traditional narrative feature covering the real-life story of a bunch of college dudes who, on basically a lark, decided to plan a heist of their Kentucky college's highly expensive books. Trying to decide between these two ways of telling this story in movie form likely was a trying decision until somebody came up with the idea of just merging the two by way of having present-day testimonies from the people involved in this heist sprinkled throughout a traditional feature film based on these men's exploits.


This means much of the screentime is dedicated to flashing back to 2003 and 2004 where Spencer (Barry Keoghan), who feels like his life is going nowhere, first informs of Warren (Evan Peters), whose already prone to thievery, about how the library at his Kentucky college houses ultra-rare books that are worth a fortune. Warren's brain is now tantalized by the prospect of stealing these artifacts and he becomes fixated on the idea of pulling off a heist that will result in himself and Spencer possessing these books and then selling them for massive amounts of money. In order to pull this off, the duo recruits the help of Eric (Jared Abrahamson) and Chas (Blake Jenner) and from here, nothing, and I mean nothing, goes according to plan.

American Animals is like a companion piece to the 2002 Russo Brothers directorial effort Welcome To Collinwood in that they're both about normal people trying to pull off a heist to chaotic results. Whereas Welcome To Collinwood took that premise and used it to produce madcap slapstick comedy, American Animals goes in a darker direction with this concept. This tonal decision is reinforced by the aforementioned modern-day interview segments (which provide some of the best moments of the film) where a variety of real-life individuals either directly or tangentially connected to this thievery look back on the whole affair with an assortment of haunted emotions.

Though it's clearly gunning for a more somber tone compared to something like Welcome To Collinwood, American Animals biggest problem as a movie is that, by the time it's winding down, it does seem to struggle to figure out what kind of larger message it wants to impart with the numerous individual pieces at its disposal. Like the four lead characters, American Animals is a movie all about living in the moment, and in the moment during the rest of the film, the assorted disparate parts (the interview segments, the traditional movie narrative, individual character motivations) tend to work well both on their own and together. But when it's time for them all to get wrapped up in the intended-to-be thought-provoking climax, well, they have a hard time trying to figure out all of these elements combined can add up too. Thankfully, a more cohesive and satisfying theme is eventually found by way of interviewing the librarian who looks over the artifacts these men were looking to steal, but there is an oddly muddled climax here that stands out coming off the heels of an otherwise well-realized movie.

Yes, prior to that thematically confused climax, American Animals is an enjoyable, even (GASP!) a highly enjoyable, romp that keeps you entertained thanks to all sorts of details like the sharp editing and direction (the latter done by Bart Layton, making his non-documentary feature directorial debut here) which give American Animals a propulsive energy that's infectious. The performances are all around engaging, especially lead actor Barry Kheogan who handles the conflicted nature of his character in a thoughtful fashion. There are also some clever moments to be had in juxtaposing the group's idealized vision of how the heist will go down with the actual reality of trying to pull it off while similarly fun are parts where differing accounts of how certain events go down in the interview segments are translated into the traditional movie narrative.

The screenplay, penned by Layton, has a rapid-dash nature to it that can lead to problems like the previously discussed confused finale, but it also manages to skillfully channel the self-absorbed go-go-go headspace of its lead characters while also making it clear why that sort of mindset was always going to lead to trouble. An inevitable sense of tragedy is flowing powerfully underneath the exuberant exterior of American Animals and it helps lend some weight to what could have been a  frivolous affair. Even if it ends on a disorderly note and doesn't really leave you with anything too lasting, American Animals is a well-done heist movie that'll keep you mightily entertained in seeing a reflective look at a preposterous heist.
Posted by Douglas Laman (NerdInTheBasement) at 1:37 PM