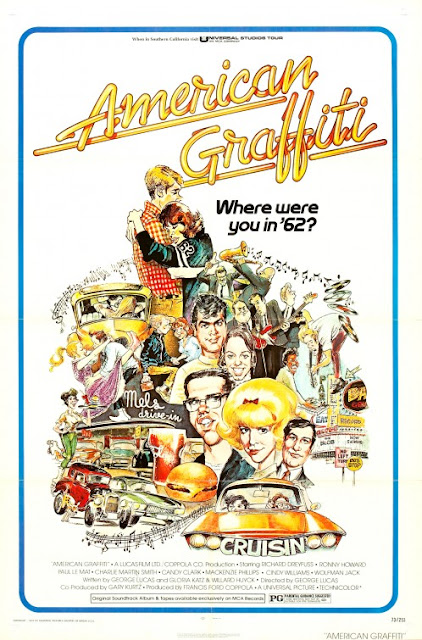 George Lucas has become highly synonymous with Star Wars, to the point that he hasn't directed a motion picture that wasn't set in the Star Wars universe in 45 years (this isn't counting how he was apparently the director of reshoots for the Lucasfilm drama Red Tails). But not only did he direct two non-Star Wars movies, his last feature film prior to the original Star Wars was a pop culture behemoth in its own right. That movie was American Graffiti, a dialogue-driven comedy that feels like a precursor to certain Richard Linklater movies like Dazed And Confused, a sharp contrast to the cosmic VFX-heavy productions that Lucas would commit himself to in the years ahead.


Set over the course of one night in 1962, a group of 18-year-old friends prepare themselves for how their lives are about to change as the prospect of moving out of town to attend college is now closer than it ever has been. Over this single night, the viewer watches the individual antics each of these friends get into as they come to terms with inescapable adulthood. One of these plotlines revolves around Steve Bolander (Ron Howard) trying to make his girlfriend open to the prospect of having an open relationship once they get into college while another see's Bolander lends his souped-up car to Terry (Charles Martin Smith), who proceeds to try to use this vehicle to make himself the dynamite ladies man he's always wanted to be.

These kinds of little incidents like make up the majority of the plot of American Graffiti and they prove to be sufficient events to build a movie around. After all, the prospect of not managing to find out the name of a pretty girl who flirted with you, a situation Curt Henderson (Richard Dreyfuss) grapples with, is the sort of molehill that conventional 18-year-olds are bound to turn into a mountain. A similar sense of realism is evoked in how the assorted problems the individual characters struggle with manage to keep getting worse, it's those small bits of social behavior taken out of context that typically get the likes of Steve Bolander into greater turmoil and that's another element of the story that feels ripped straight out of the teenager experience in 1962 or any year.

These are the best parts of the script by George Lucas, Gloria Katz, and Willard Huyck, with, conversely, it's weakest aspects emerging in the form of some examples of shoddy dialogue while the biggest flaw on a writing level is how various supporting characters that the four leads run into during their night of escapades tend to feel generic rather than realistic. Some biker hoodlums that Curt gets entangled with, for instance, feel like uninteresting stereotypes and all of the female love interests feel interchangeable, they don't have much of a personality of their own beyond their current relationship with the male leads.

A similar movie about casual teenage coming-of-age rambunctiousness like Dazed And Confused get a lot of entertainment out of making each person in the story, even ones with minimal or no dialogue, distinctive, a pity that American Graffiti struggles with rounding out its story with a strong supporting cast. The well-realized lead characters help mitigate this flaw though, especially in terms of the performances from our four main actors. In his first major leading man role, Richard Dreyfuss establishes himself as a compelling actor, one who's able to channel youthful longing in a manner that gets you wrapped up in his quest right from the get-go.

A super young Ron Howard, who already has that distinctive voice that fellow Arrested Development fans will never forget, also leaves an impression as a frequently unsavory character while Charles Martin Smith, playing the kind of nerd archetype that would be the default portrayal of nerdy human beings for decades, gets some of the biggest laughs (especially in a scene where he tries to buy liquor without the aid of an ID) in his effortlessly realistic performance. In a supporting role here is Harrison Ford, who already lights up the screen in a way that makes it clear this kid is destined for big things. He and George Lucas would achieve those big things in the years to come, but with American Graffiti, they managed to leave an entertaining cinematic mark before they traveled to a galaxy far far away.
Posted by Douglas Laman (NerdInTheBasement) at 12:11 PM