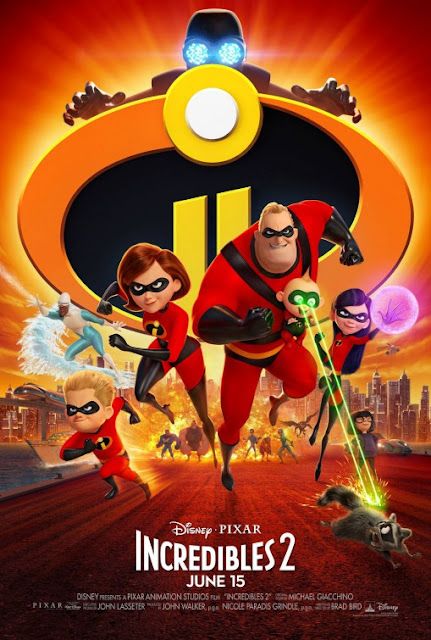 The various films released by Pixar Animation Studios (there's exactly 20 of them now) has become heavily associated with the big heartfelt moments that leave adult audiences reaching for the tissues. Remember the endings of Toy Story 3 and Coco? Remember that montage of married life from Up? Remember every other scene from Inside Out? Big moments of pathos that pay off well-developed characters and result in moviegoers becoming a puddle of tears are a staple of the studios canon so it's interesting that Incredibles 2 is the first film from the studio since maybe the first Incredibles and maybe even A Bug's Life to not even attempt a moment of overwhelming poignancy, something even recent Pixar sequels like Cars 3 and Finding Dory incorporated multiple times in their own storylines.


It is odd that such a common element of the studio's output is absent, but it isn't a bad thing at all since, A) Cars 2 and Brave showed that just because a Pixar movie has moments that try to move your heart doesn't mean said moments will actually do that, and B) the name of the game here is fun. Writer/director Brad Bird is looking to take the established Incredibles characters into new situations and see what kind of comedy emerges from how the characters react to their upended individual status quo's, which turns out to be a creative starting point that results in something that isn't either as substantive as the best of these Pixar films or as thoughtful as it could have been on its own merits but is greatly funny and may even be better than its predecessor in my book, though I freely admit to not loving the original Incredibles as much as everybody else.

Incredibles 2 continues moments after the first film ended, with the superhero family now fully embracing the idea of being costumed crime-fighters, but the government is still upholding laws deeming superhero activity illegal. Helen Parr (Holly Hunter) and Bob Parr (Craig T. Nelson) find themselves at a crossroads as they figure out what to do with their lives, but their quandary gets solved by telecommunications mogul Winston Deavor (Bob Odenkirk) and his inventor sister Evelyn Dever (Catherine Keener), who want to head up a new campaign to help superheroes get legalized again. Helen, in her Elastigirl persona, is chosen as the superhero who will be the face of this new campaign, leaving Bob Parr to take on the responsibilities of being a stay-at-home dad who takes care of their three kids.

Now Helen has to deal with the threat of a new supervillain called The Screenslaver while Bob has to adjust to helping out the various problems his kids are going through. Despite a good chunk of the story being focused on Elastigirl trying to be a big-time superhero who can restore luster to the idea of superheroes being legal again, Incredibles 2 does end up feeling like a more intimate film than its predecessor, with the likes of extended stays on exotic lands and massive chase scenes getting replaced by storylines about Elastigirl trying to use her superhero actions to get important legislation passed and Bob trying to navigate unfamiliar real-world parenting dilemmas (like teenage daughter Violet's romantic issues or adolescent son Dash's confusing math homework). There's still plenty of spectacle in here but Incredibles 2 does resist the urge to go bigger simply for the heck of it like many sequels do.

Of course, just because so much of Incredibles 2 is informed by more realistic tendencies doesn't mean there the more fun parts of superheroics get ignored. Despite openly saying that he's not really interested in superheroes in general, writer/director Brad Bird shows some real creativity in how to utilize the various superpowers of individual superhero characters in fight scenes. In interviews with Brad Bird and other members of the crew of this project, it's been made clear that they have an adherence to having the world of The Incredibles in both of their movies lean closer to classical upbeat renderings of superheroes, specifically depictions of the characters from the 1940's to the 1960's, rather than grimmer modern-day takes on super-powered individuals.

This means Incredibles 2 fully embraces just going for more old-fashioned takes on evildoers who would rather rob banks or damage City Hall rather than cut off their own face (like The Joker did a few years back for some Ungodly reason), resulting in a lot of light-hearted fun that's thoroughly exciting to watch thanks to, among other elements, some great camerawork and editing. At the same time, the more introspective approach to contemplating how superheroes would function is also carried over from the first movie. Basically, Incredibles 2 gets to have its cake and eat it too in terms of how it approaches its superheroes, it embraces the broader light-hearted versions of the superheroes common in the mid-20th century while also employing realism (albeit to a lesser degree than the first movie) to help explore said superheroes as complex characters.

This means Incredibles 2, just like its predecessor, has all kinds of fun with its superhero characters while also managing to be thoughtful in terms of realistic characterization in a seemingly paradoxical mixture that ends up working quite well. A lot of the most enjoyable fun moments here come from the Parr families baby, Jack-Jack, who possesses numerous superpowers that cause all kinds of trouble. Jack-Jack is at the center of some of the funniest scenes of the movie, with the best of these scenes being an extended battle between Jack-Jack and a raccoon. It's an entirely silent sequence that makes hilarious use of physical comedy in a manner that would make Chuck Jones proud. That may be the funniest part of Incredibles 2, but it's certainly not the only moment that garners laughs. Even Bob's storyline, which at first seems like a retread of the old "Dad's are doing parenting stuff? Uh-oh!!" routine that Michael Keaton already covered over thirty years ago in Mr. Mom, delivers some major yuks since it ends up drawing comedy from character-specific situations rather than just thinking the sight of a Dad trying to be a stay-at-home parent is inherently amusing.

The fact that so much of the comedy in Brad Bird's screenplay works can be partially chalked up to the stellar voice acting, particularly from Holly Hunter, reprising her role as Elastigirl in an expanded role that allows Hunter plenty of chances to shine. Craig T. Nelson, though sounding older than he did in the first Incredibles, also does fine work returning to the role of Mr. Incredible while the most prominent new actors, Bob Odenkirk and Catherine Keener, fit their respective parts like a glove. The voice cast, like the majority of Incredibles 2, works quite well and are a key reason why this comedy ends up being so enjoyable. Though I wish it was more substantive on a thematic level, Incredibles 2 is a lot of fun that gives writer/director Brad Bird his fourth animated movie winner and shows he hasn't missed a step in making entertaining tales with these characters despite the 14-year gap between the two Incredibles movies.
Posted by Douglas Laman (NerdInTheBasement) at 11:37 AM