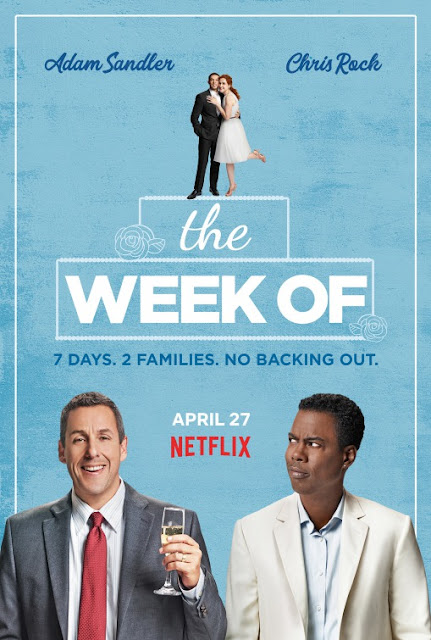 As far as general comedies go, The Week Of is just kind of "eh". It's more pleasant than funny, it's plot structure of revolving around the week leading up to a wedding gives it some form of narrative focus, but it totally stumbles in trying to create a schmaltzy third act around characters who haven't qualified as all that humorous let alone worth engaging in emotionally. But since Adam Sandler is playing more of a human being here than a wacky vocally high-pitched caricature rejected from Saturday Night Live, plus the bathroom humor has been limited to just an old man constantly needing his diaper changed, it isn't all that grating and that makes it practically a masterpiece compared to most of Adam Sandler's leading man efforts and especially when compared to his other Netflix efforts.

Sandler gets to play Kenny Lustig here, a run-of-the-mill middle-aged guy whose daughter is about to get married to the son of wealthy surgeon Kirby Cordice (Chris Rock). Lustig insists on footing the bill for the entire wedding, per the traditional role of the father of the bride in these scenarios. Of course, things aren't going as planned, whether it's the shoddy conditions of the hotel that Lustig has paid for Cordice's relatives to stay in or the steadily growing number of people who are forced to stay in his own home for the week. It's only seven days until the wedding, but with all the mishaps he's going through, it feels like an eternity for Kenny Lustig.

That's basically all that goes down in The Week Of, which doesn't just serve as the newest Adam Sandler vehicle, it's also the directorial debut of Robert Smigel, the man who created Triumph The Insult Comic Dog in addition to numerous other comedic achievements. I've enjoyed a lot of Smigel's other work as a comedian (especially Triumph) and I wish the same sense of comedic creativity that's found in his other works was more present here. The Week Of isn't bad, no sir, but it is on the generic side of things, which is certainly something that isn't usually used to describe the work of a guy who walks around interviewing people with a profane dog puppet.

The best jokes in The Week Of are unexpected out-of-nowhere gags like Steve Buscemi showing up with giant oversized candy bars and booze bottles, while weaker material like Adam Sandler and Rachel Dratch (who play husband and wife here) engaging in loud off-screen arguments suffer from a sense of stale predictability. The same goes for a joke about an elderly relatives inability to use the bathroom on his own, we've seen these gags before and it feels like more imaginative material could be wrung out of this premise. The fact that Chris Rock doesn't factor as heavily into the proceedings as one might expect is also an issue that lessens the amount of successful comedy found in The Week Of, though at least supporting actors like Buscemi and Rachel Dratch score some laughs in their screentime.

An extended schmaltzy climax that greatly overestimates one's emotional investment in these characters ends things on a poorly executed note complimented by Adam Sandler doing some intentionally bad singing that's more grating than humorous. Luckily, this is the rare instance of The Week Of doing painfully bad comedy, most of the jokes that misfire here are dull more than anything else. There are some funny jokes to be had here though and again, that alone makes it a step up from the torturously unfunny films Adam Sandler has starred in in his time as a leading man on Netflix. I do long for the day though when Adam Sandler stars in a comedy that manages to be good before you compare it to his other movies.
Posted by Douglas Laman (NerdInTheBasement) at 1:27 PM