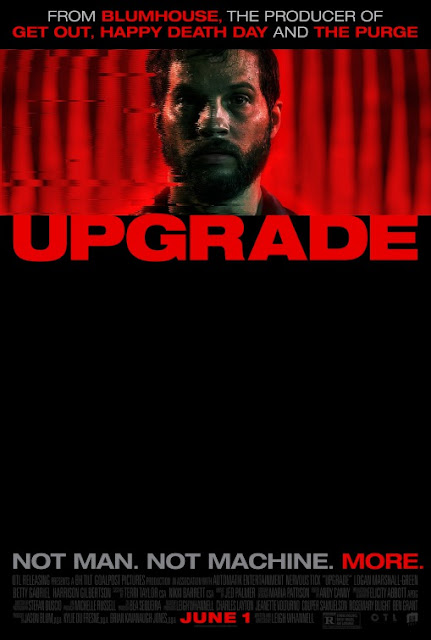 Upgrade takes place in a near future world where technology is omnipresent and Grey Trace (Logan Marshall-Green) doesn't like that one bit. He's an old-school kind of guy who spends his day fixing up classic vehicles and refuses the aid of technological advancements as much as possible. Despite being a guy who despises technology who lives in a world run by technology, Grey has a pretty good life, especially since he's married to the love of his life, Asha Trace (Melanie Vallejo). But everything changes for him when Trace is killed in a mugging that also leaves Grey paralyzed from the neck down, a condition he learns can be reversed by the placement of a cyber-enhancement chip called STEM into his spine.


STEM will allow Grey to walk again, though the man behind the chip, Eron Keen (Harrison Gilbertson), demands Grey keep this miraculous chip a secret so that the government doesn't come in and shut down his unauthorized experiments. That's easier said than done when Grey learns that STEM can talk (he's voiced by Simon Maiden) and can help track down the guys who killed his wife. What follows is an action revenge story told through a science-fiction lens that manages to upend one's expectations more often than you might expect (though it's also got its fair share of predictable story turns), most noticeably with the lead character of Grey Trace and what an unorthodox hero he is for this type of action movie.

Normally, in revenge action movies, once it's time for the lead character to actually dish up some violent vengeance they become unstoppable perfectly killing machines that don't blink twice at leaving a bad guy for dead. Upgrade dedicates numerous action sequences to STEM taking over Grey's body and turning him into the ultimate fighting machine that makes Liam Neeson in Taken look like Liam Neeson in Wrath of the Titans. Interestingly though, an intriguing curveball is thrown into the story by way of having Grey be visibly shaken up after commiting these acts of violence. He's not shrugging off having just thrown multiple people into a wall, he's frequently mortified that STEM is making it possible for him to do these things.

Constantly emphasizing a relatable sense of shock over the newfound physical prowess STEM provides him is something Logan Marshall-Green excels at in his wonderful lead performance as Grey. Logan Marshall-Green is adept at making sure Grey always comes across as a real human being no matter how bizarre the story he's in gets and it's especially impressive what a natural rapport he has with the voice of STEM. Some of his best work in Upgrade comes from his interactions with this character who's never given a physical form, particularly in the initial scene where he discovers STEM even has a voice, which has Marshall-Green combining fright peppered with curiosity in a riveting manner. Logan Marshall-Green does great work in the lead role of Upgrade and ensures the feature has a recognizably human soul to accompany all the grisly action mayhem.

All of that gross-out violence that Grey dishes out to his foes throughout Upgrade provides some of the most memorable parts of the production, majors kudos need to be handed out to the stunt team and stunt coordinators here for pulling off some impressively staged fights that take full advantage of what kind of fighting Grey can dish out when STEM takes over his body. Writer Leigh Whannell, who also directs this project, creates some mighty fun action sequences here, though I wish the creativity that abounds in this hand-to-hand combat scenes extended to certain key plot points that end up being too predictable and especially the frequently clunky dialogue. Particularly in the opening sequences of Upgrade. characters like Asha Trace (whose characters repeated use of "My husband" is particularly awkward) drop all kinds of clunky expository dialogue that comes off as heavily unnatural.

Whannell fares better as a writer in terms of crafting an enjoyable tone that makes sure the majority of Upgrade carries a wry sense of darkly tinged fun to it, there's no attempt to force an unpleasant sense of gloominess or grittiness into a premise like this that offers up so many chances for exciting and ultra-violent fun. As a director, Leigh Whannell turns out to have a good eye for staging action scenes behind the camera, a wonderful surprise given how much of his work up to this point has been in low-budget horror fare largely devoid of action. Even if it gets hampered by frequently poor dialogue and some predictable story turns, Upgrade offers up some delightfully violent shenanigans and enough unique story details to be solidly entertaining and best of all, it provides a chance for Logan Marshall-Green to shine as a lead actor.
Posted by Douglas Laman (NerdInTheBasement) at 11:35 AM