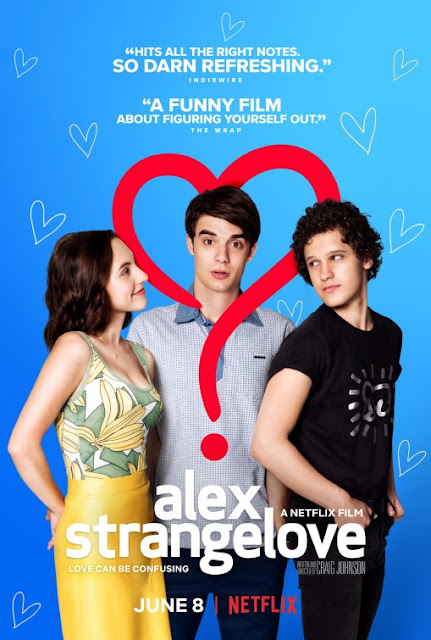 Though the fact that Alex Strangelove, a movie about a high school dude coming to terms with not being heterosexual, could even exist as a reasonably budgeted feature film is very much something that could have only happened in recent years, the film's tone is more of a relic from the early 2000's when everyone was trying to rip-off the style of American Pie by making raunchy coming-of-age comedies about High School and college-aged dudes trying to "score". Though comedies starring older characters like the works of Judd Apatow and The Hangover put an end to that trend, here is Alex Strangelove, seemingly ripped straight out of that era of American comedy yet debuting on Netflix just earlier this month.


The title of Alex Strangelove is also sort of the name of its lead character who is actually called Alex Truelove (Daniel Doheny). Though his last name may make him sound like a romantic fool, Alex has had very little experience in the way of love and he has had trouble with the idea of losing his virginity to his girlfriend Claire (Madeline Weinstein). Though he's attributed this hesitance to his natural awkwardness, an encounter with an openly gay guy at a party makes Alex start to question if maybe he's not entirely straight? Thus begins his messy process of coming to terms with his sexuality, one that may just end up leading him to a person that can live up to his own last name.

Scenes that place an emphasis on Alex losing his own virginity or grappling with his sexuality is where all of the raunchiness that feels lifted from a directly post-American Pie comedy comes in and much of it feels tired rather than funny, particularly Alex's trio of dude friends who could have been lifted from any other High School comedy. Simply saying variations on the word penis isn't enough to create humor but Craig Johnson's screenplay really suffers from frequently not realizing that. Other extended sequences meant to generate laughs like Alex's best bud going on a bad drug trip after licking a toxic frog have this genericness to them that really stands out since they're occuring in a story that's conceptually unique.

Also standing out as a problem in Johnson's writing is how the script handles it titular lead character. Most noticeably, Alex Truelove is given some unique personality traits (namely, his love for animals) in early scenes that are mighty interesting and feel like they subtly defy stereotypes of how American pop culture expects LGBTQA+ men to act. But the majority of these traits get completely forgotten about by the time the film's only halfway over, and as a result, Alex ends up feeling like a half-formed protagonist. Meanwhile, the characters journey to embracing his own sexuality is hard to get invested in since the film seems to simply see it as an opportunity to create tired raunchy jokes. There's certainly humor to be found in the experiences of grappling with one's sexuality as a teenager, but surely there were better jokes to be found here that could be balanced with actually exploring Alex as a character?

But humor has clearly replaced characterization here and that means the potential emotional power this premise could carry is never realized. Maybe it's for the best that Alex Strangelove doesn't try to do much in the way of character work since the one time it tries to do just that, well, it doesn't really work out. An awkwardly handled climactic flashback scene that's supposed to introduce a tragic element for why Alex Truelove has kept his homosexuality bottled up for so long feels like it's coming into the story way too late and feels totally at odds tonally with what's come before it. The rest of the film has been something akin to National Lampoon's Van Wilder and now it's shifting gears for such a bleak dramatic sequence? Such a jarring tonal shift just doesn't feel earned or executed properly, even if it at least feels like the sort of introspective material the film could have used more of.

Despite the numerous problems in its writing, Alex Strangelove does have a number of positive qualities to it. Some key emotional moments in the climax end up working and writer/director Craig Johnson, the maker of the excellent 2014 film The Skeleton Twins, pens some fun dialogue for the characters to exchange. By and large, the performances pretty solid, most notably Daniel Doheny in the lead role.  Those better attributes tend to come from when Alex Strangelove is channeling its own unique voice and spirit instead of just feeling like so many other R-rated comedies set in High School. If it had just been able to more fully establish its own distinct identity, and also flesh out its lead character more, I might have been able to truly fall head over heels for Alex Strangelove.
Posted by Douglas Laman (NerdInTheBasement) at 1:28 PM