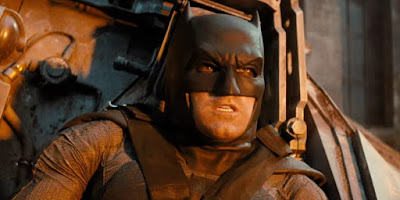 Everyone's been talking about the R-rated "true-to-the-comic-books" irreverence of Deadpool and the gravitas-infused epicness of Captain America: Civil War, but now Warner Bros. has stepped up to the plate to generate more buzz for Batman v. Superman: Dawn of Justice. The past two trailers for this new Zack Snyder film have their share of devotees to be sure, but they haven't quite resonate in the public consensus like, say, the trailers for Age of Ultron, Jurassic World or The Force Awakens did. Will that change with this new trailer? We shall see.

Watch it below and then read my thoughts on this new trailer, which does contain some hefty spoilers.

Has the whole "somber version of a notable song" trend in trailers already left as soon as it came? I really wanted a childrens choir to deliver a sad version of Waiting for Superman by Chris Daughtry.

You know what I love in this trailer? That first exchange with Bruce Wayne and Clark Kent. Yes, the dialogue is on-the-nose, but I enjoy the concept of these two individuals poking the bear a bit, trying to scope their opponent out. Plus, their conversation leads to the trailers main highlight, Jesse Eisenberg as an apparently Max Landis inspired version of Lex Luthor. Every time Luthor shows up to chew the scenery in this trailer, I couldn't help but smile. Oh, and the bad-ass entrance of Wonder Woman at the end is gloriously executed.

Yet., that Wonder Woman moment comes with a caveat, as it occurs during the last 30 seconds or so of the trailer where major spoilers enter the arena, including the presence of the Lord of The Rings troll, er, I'm sorry, The Abomination, gah, wait, hold on...Doomsday, ok, that's "beloved" 90's comic book marketing gimmick Doomsday at the very end. Twists and turns shouldn't be the only reason a movie works, but for Gods sake Warner Bros., leave something to the imagination in your cinematic foreplay!

And now, just for some little things that bugged me in this trailer; why do both of Batman's voices (the robotic one that sounds like Ultron with a cold and his Christian Bale inspired vocals) sound off? Is one of the greatest actors of our generation Amy Adams gonna get wasted again? Is it too late for her to go over to Marvel and be Valkyrie in the next Thor movie? Will all the cool examples of memorable imagery in this trailer actually translate into a cohesive thematic experience when placed into the framework of a narrative feature film? Time will tell. Right now, I'm more "eh" about Batman v. Superman than anything else, though, even if it is too spoiler filled (and I'm sure the last 30 seconds of this trailer will be pretty much incoherent to general moviegoers), at least it's less grim/dark and more bombastic than past marketing materials for this motion picture.
Posted by Douglas Laman (NerdInTheBasement) at 8:09 AM