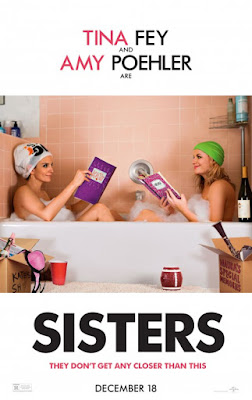 We've all seen this premise before; two siblings intend to throw a major party in their humble abode in order for the more restrained "uncool", if you will, sibling to prove their worth in a more reckless atmosphere. Sisters throws a few new wrinkles into this conventional premise, for starters making the two siblings at the center of the plot two women over 40. Those sisters are Maura (Amy Poehler) and Kate (Tina Fey), who learn their childhood home is about to be sold and intend to throw a big o'l bash that'll allow for Maura to finally, in her own words, "...let her freak flag fly".

Sisters gets a lot of mileage out of juxtaposing the age of our two leads and the various inhabitants at the party they host (except for a nail salon employee and her friends, everyone at the party is over 35 and more often than not has a child). Thankfully, the jokes rise above "Hahaha, old people!" and instead go for smart observational humor, such as the fact that an antagonistic character in the story mistakes the sight of the party guests having exchanging small talk and looking somber as them attending a wake, and not a rip-roaring party. Of course, things soon get wildly out of control, allowing for menagerie of well-known names (namely, John Leguizamo, Maya Rudolph, Bobby Moynihan, Samantha Bee and a drug dealing John Cena) to pop up as supporting characters and draw out solid laughs with their shenanigans during this event.

Our lead characters also get their chance to grow, develop and what not during the proceedings, to decidedly more mixed results. Maura, it must be said, is easily the films best creation, with Poehler managing to play endearing awkwardness like few else can. Watching her flirt, try on party dresses (which leads her to note that they need some clothes that are "...less Forever 21 and more Suddenly 42") and go crazy at the party with her own charmingly ungainly personality is a ton of fun to watch. Kate, on the other hand, feels far more conflicted as a character, with the film trying to make her both an overzealous helicopter parent and the super crazy party girl.

There's a way to make those contrasting personality traits work and create some revealing duality for this individual, but frankly, in the film itself, she just comes off as more erratic, as if the script by Paula Pell couldn't bear to part with either part of her personality and decided to just mush 'em together. Luckily, as crazy as this may sound, Poehler and Fey have a ridiculously fun rapport, and I appreciate the script starts off with these two on good terms. Maura and Kate look out for each other, and there's a lot more comedy to be mined from these two insanely talented comedians encountering various comedic situations together than just getting the plot going with them mired in contrived conflict that could potentially separate them for much of the movie.

Those weaknesses with Kates character make some of the more sentimental moments towards the end of the feature (which initially feel as out of place as attempting to shoehorn in a PSA about how to safely use hacksaws at the end of a Friday The 13th feature) not feel as earned as they could be under different circumstances, specifically scenes dealing with her reconnecting with her estranged daughter. Luckily, much of Sisters focuses on gags and not such pathos soaked sequences, and waddya know, a lot of that humor works super well. I wish there was more effective substance within Sisters, but at least it's got the sense to realize its best asset is the dynamic between Amy Poehler and Tina Fey and utilizes it accordingly to solid results.
Posted by Douglas Laman (NerdInTheBasement) at 3:28 PM