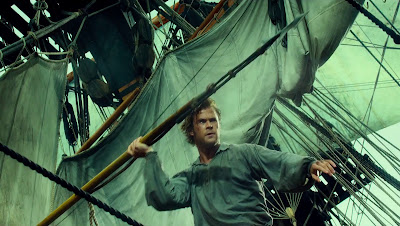 The weekend before The Phantom Menace opened, only Black Mask, A Midsummer Nights' Dream and Trippin' debuted, none of which opened in over 1100 theaters or grossed over $5 million in their opening weekends. Similarly, a week prior to The Force Awakens arriving, only In The Heart Of The Sea dared to face it. It did fare better than those three aforementioned 1999 titles, though it still suffered a mighty poor opening weekend considering its massive budget. The newest Ron Howard film couldn't even top the charts this weekend, instead coming in second place behind The Hunger Games: Mockingjay: Part Two which nabbed another $10.8 million, the final Hunger Games adventure came into second place and only dropped 43% from last weekend, which is about on par with the 42% fourth weekend dip of its predecessor (Mockingjay: Part One).

It has now taken its domestic haul to $243.9 million, and currently Mockingjay: Part Two trails its predecessor 24 day gross by about 12%. While this Francis Lawrence motion picture will certainly plummet when it loses screens to The Force Awakens next weekend, it should still be able to gain some heart business through Christmas and should be able to take its domestic haul to about $275-280 million when all is said and done. Meanwhile, in second place, In The Heart Of The Sea set sail with an $11 million haul, which is only a 10% increase over the wide opening weekend of Ron Howard and Chris Hemsworths last collaboration Rush.


In The Heart Of The Sea probably would have done a smidge better in its original March 2015 release date, if only because there'd have been far less critically raved about dramas in the marketplace at that time. While the extended holidays coming up will ensure In The Heart Of The Sea gets past $30 million in its domestic run, the middling word-of-mouth from critics and audiences make me doubtful it goes much higher than that.

Coming in third place was The Good Dinosaur, which added another $10.4 million to its domestic gross this weekend, bringing its US gross to $89.6 million. Its third weekend drop of 31% is a bit better than the 33% dip Tangled had at the same point, though considering its underwhelming first two weeks, it may be too little too late for The Good Dinosaur. Meanwhile, Creed was just behind Arlo and his prehistoric pals with $10.1 million, a strong 32% dip from last weekend that brings in $79.3 million. Look for this sleeper hit to finish its domestic gross in the neighborhood of $115-120 million.

Rounding out the top five was Krampus, which had a very strong by horror movie standards 50% second weekend dip for an $8 million weekend and a 10 day total of $28.1 million. For comparisons sake, fellow PG-13 2015 horror feature The Visit lost 54% in its second weekend back in September. This smaller than average dip can be attributed to positive word-of-mouth as well as its obvious holiday themed material being timely viewing in this month. This will be another title that takes a massive hit once The Force awakens this weekend, but it wouldn't be shocking at all if Krampus spooked his way past $40 million when all is said and done.

The Top 12 this weekend grossed a paltry $68.7 million, making it the third worst weekend of 2015. I have a hunch business will be picking up this coming weekend when majorly anticipated sequel Alvin And The Chipmunks: The Road Chip hits theaters everywhere.
Posted by Douglas Laman (NerdInTheBasement) at 6:05 PM

Email ThisBlogThis!Share to TwitterShare to FacebookShare to Pinterest
Labels: Box Office Analysis, In The Heart Of The Sea, The Hunger Games: Mockingjay Part 2