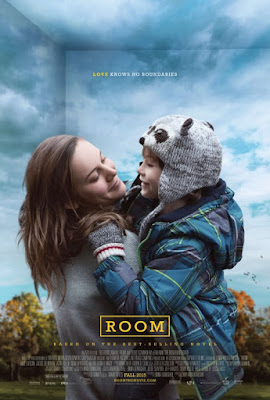 Note: Normally, my reviews are as spoiler-free as possible. However, for this review, I will be discussing plot points from later portions of the film that could be described as spoilers in the conventional sense, though the plot turns are revealed in the trailer for the film. Don't worry, I don't go into excruciating detail on such elements of the story, but this is one film where going into it cold might be the best option. Just know that I found Room to be great if you don't want to read my super mildly spoilery review.

Room proves to be a far more harrowing experience than the majority of modern day horror films, simply by having its entire premise hinge on a situation that all too tragically occurs in reality. The fact that its entire concept stems from a more pragmatic source already adds a disturbing undercurrent to its diegesis. Such a connotation would likely bend and crack underneath the weight of poorly developed characters, but luckily, Room goes through great and commendable strides to ensure that its two lead characters are the most engrossing parts of the entire production.

Though not based on a specific true, the plot of Room, as I said before, is inspired by real life events involving women being held captive in a conventional American suburban environment for extended periods of time. It's terrifying to think about such a horrifying predicament occurring the sanctity of seemingly tranquil neighborhoods many people call home, and even more horrifying to contemplate the effects such circumstances would have on the individuals being detained. The psychological effects of this tragedy are what Room centers on, with the aforementioned two lead characters being Ma (Brie Larson) and her five-year old son Jack (Jacob Tremblay), the latter individual having spent his entire existence in a tiny environment the duo have dubbed Room.

Room doesn't even blink at looking at the brutal harshness that living in this domain has had on its two lead characters. and that slavish devotion to examining the trauma on Ma and Jacks psyche results in an intense, unflinching atmosphere that sweeps a viewer up like the wind in a hurricane. Even better is the fact that the interactions between the duo feel like the actual dynamic between a mother and son. They bicker, they fight, they cry, they laugh, this isn't a sanitized look at the relationship between a mother and son, far from it. These are real individuals whose horrific plight we the audience hope against daunting odds they escape.

Larson has spent the past few years in memorable supporting turns in films like Scott Pilgrim vs. The World, 21 Jump Street, Trainwreck and The Spectacular Now, as well as the occasional lead role in features like Short Term 12. Needless to say, her astonishing work here ensures that, yeah, she's come a long way from just dating a super-powered vegan. However, the true gem in the cast is easily Jacob Tremblay, especially in scenes where he comes to term with the outside world beyond Room. Entire scenes of him discovering little everyday things we take for granted like linoleum flooring are delivered entirely without dialogue, and a primary reason they work so well is because Tremblay (as well as the solid directing from Lenny Abrahamson) rise to the challenge of bringing on the nuance and making such sequences engrossing.

Perhaps in the wrong hands, Room might have come across as inappropriate sensationalism, with a director like, say, McG, using the real life tragedies that inspired the feature to create something far more crass than what director Lenny Abrahmason has delivered. No, thankfully, Room instead serves as a captivating motion picture that takes an unflinching examination of how the experience of being held captive would affect individuals like Ma and Jack. Their mother-son connection is so beautifully realized, and I'm so glad Room places such an enormous emphasis on it. Now, let's be clear, it doesn't try to pass of the idea of love as a "one-size-fits-all" cure for the horrific atrocities perpetrated against the two. There's serious psychological, and in the case of Ma, physical, scars they carry from their experiences in Room. However, the twos devotion to each other is seen as a rare solitary glimpse into the goodness of humanity within a sea of relentless savagery. And yet, that glimpse of love is more than worth fighting for.
Posted by Douglas Laman (NerdInTheBasement) at 11:21 AM