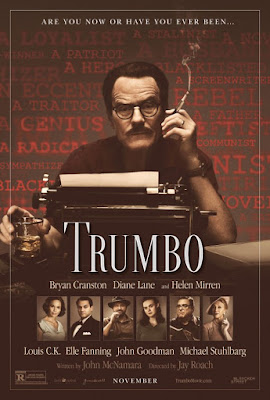 Trumbo strikes me as a movie that could have been far better with a little bit of consolidation. Any individual portion of the life of Mr. Dalton Trumbo (here portrayed by Bryan Cranston) that's depicted in this film would made fine fodder for an entire motion picture unto itself. Crammed against the weight of trying to depict an entire decade of his existence, well, it doesn't work nearly as well as it should, despite a super game cast.

Dalton Trumbo was one of countless individuals targeted by the Blacklist, an entity consisting of numerous figures in Hollywood who were prohibited from working due to their affiliation with communism. The plot of this movie concentrates on the more idyllic period just before Trumbos prison sentence, his time in the slammer and then his gradual ascension back into the Hollywood limelight via writing B-movies under a pseudonym. This is a lot of territory to cover storytelling-wise, and like I said, Trumbo just can't rise to the challenge of turning all these story threads into a singular satisfying experience.

Much of the problems with the film stem from its more easygoing vibe, which clashes with the features frequent attempts to engage with more weighty material. A prison stay for Trumbo seems to be more like an extended holiday considering how little conflict he endures in that environment, and any clashes with his family that derive from his workaholic personality leave as quickly as they arrive. For a story dealing with real life lives that were forever severely damaged by the Blacklist, you'd think this would be a more gripping story, instead of one that just seems to saunter from one insouciant scene to the next.

Luckily, the film has a gangbusters cast that manages to be a massive saving grace for the entire production. Bryan Cranston as Dalton Trumbo lends a soft-spoken but authoritative presence to the plot, and he does a damn fine role in the plot, proving that his top-caliber acting as Walter White was no fluke. Louie C.K., Michael Stuhlbarg (playing Edward G. Robinson) and especially a scene stealing John Goodman turn in noteworthy supporting turns. Meanwhile, Diane Lane, playing the wife of our titular lead, Cleo Trumbo, gets nothing to do aside from one scene where she juggles some cups.

Out of the cast, the most bizarrely underutilized actors of the bunch is Helen Mirren as Hedda Hopper, an antagonistic figure in the story who pops in and out to an erratic degree. Whenever she is on-screen, Mirren seems to be channeling Rita Skeeter more than any sort of of individual who would fit into the realistic world of Trumbo. All these actors work under the guideship of Jay Roach, who does serviceable work here, though I wish he had toned down the overt lighting in the film. It had the effect of making all the environments in the story look similar as well as giving the furniture a quasi-plastic look to my eyeballs.

Let me be upfront about this; Trumbo isn't bad, I'd even say it's a step up from average. But it does feel like it drops the ball in so many crucial facets (namely in creating any sense of danger or urgency) that I can't help but feel cheated just a bit considering how much promise the premise carries. If you're a fan of Bryan Cranston and finds the days of yesteryear Hollywood as fascinating as I do, Trumbo makes for decent viewing, but it's a real shame it isn't anything more than that.
Posted by Douglas Laman (NerdInTheBasement) at 7:02 AM