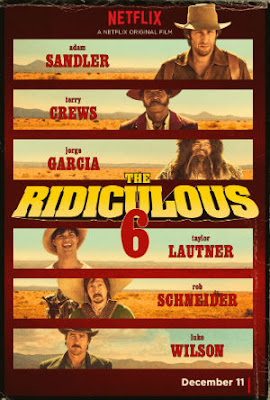 Is it just me or is Adam Sandler seemingly trying to imbue more ambition into his most recent projects? After the likes of Just Go With It, Grown Ups 2 and Jack & Jill had all the astounding production aesthetics of shoddy home videos of Sandler and his buddies, the actors two major live-action projects (Pixels and the subject of this review The Ridiculous Six) from this year have a clear intent to bring the comedians humor into the realm of other genres of storytelling. Pixels attempted to plot Sandler into an Independence Day like sci-fi disaster movie, one that was so excruciating to experience I still can't look at an image of Pac-Man five months later without getting a chill across my spine.

The Ridiculous Six, meanwhile, sees Sandler joining a recent trend famous cinematic names (following Gore Verbinski, The Coen Brothers, Quentin Tarantino) putting their own spin on the time-honored film staple of westerns. But whereas modern day westerns like Slow West and Rango utilized the iconography and storytelling staples of the western to unearth fascinating layers of its characters, The Ridiculous Six uses this genre to do....well, the kind of stuff screenwriters Adam Sandler and Tim Herlihy have practically turned into traditions within the pantheon of Sandlers star vehicles. You want staples of "classic" Sandler fodder like gratuitous pointless cameos, painfully unfunny jokes and sexism so blatant even Mike Huckabee would find it off-putting? Well have I got a movie for you! Yes, while Sandler and his crew may be trying to stretch out of their comfort zones in terms of what genres their films inhabit, one thing's for certain if Pixels and The Ridiculous Six are anything to go by; the movies will still be garbage regardless of if they're westerns, sci-fi or black-and-white French films.

Tommy (Adam Sandler) is a man whose been raised by Native Americans all his life, and has been eager for years to meet his father...who just so happens to stroll into his village one day. After a brief father son reunion, the man, Frank Stockburn (Nick Nolte), is taken hostage by the nefarious Cicero (Danny Trejo). The only way to free Tommy's dad? Get $50,000, which he decides to take back via the method of stealing from super duper corrupt people, with the help of his five newly discovered brothers, who are played by Rob Schneider, Taylor Lautner, Luke Wilson, Jorge Garcia and Terry Crews (goddamnit, Crews deserves better than this).

These recently uncovered brothers make up much of the jokes and "emotional" moments of the motion picture, though their personalities are essentially boiled down to simplistic unfunny character traits. Lautner's character, for instance, is dim-witted and has three nipples, Wilson carries a guilty conscience stemming from his inadvertent involvement in the death of Abraham Lincoln while the feature makes some subtle visual cues to indicate the fellow played by Rob Schneider may hail from Mexico. What makes me say that? Well, he's always wearing a poncho and sombrero, rides around on a donkey and talks wistfully about discovering "Taco trees". Yes, these are the actual jokes in this miserable script.

Actually though, the one remotely interesting thing about The Ridiculous Six is how much it relies on supposedly "heartfelt" moments instead of gags to drive its plot. There are one or two scenes in the movie entirely devoid of even attempts at jokes, with the script bizarrely tossing out numerous scenes relying on the audiences emotional investment in these six brothers that fall incredibly flat because the six individuals at the center of this story just aren't that interesting. The fact that The Ridiculous Six tries to play certain plot points so straight-faced does make it faintly more tolerable than, say Pixels, simply because watching scenes of supposed poignancy go awry is more entertaining to watch than yet another scene in Adam Sandler film degrading women for cheap "laughs".

Perhaps the most surprising element of the film played in a completely earnest fashion is Sandlers character, who plays the straight man to his rowdy brothers and I don't think ever once actually delivers a joke in the course of the motion picture. Sandler speaks all of his dialogue in a raspy voice that seems to be channeling Christian Bales Batman voice, while his facial expressions in the film seem to constantly be in a precarious place between bored and indignant. Maybe he's as tired of this crappy movies as we the moviegoing population are. One peculiar facet of his character worth mentioning; Tommy has super-speed abilities (no, I'm not making this up) that he uses in the opening scene of the feature to take down a group of one eyed bandits led by Will Forte, and then these powers never come up again. You'd think the ability to run at super speed would be a mighty helpful asset when robbing corrupt individuals, but nope, you never see that particular skill of Sandler's character ever again.

Frank Coraci, director of American classics like Zookeeper and Here Comes The Boom, is the one behind the camera here, and while the film takes on a more cinematic look than the likes of Grown Ups 2, there's a multitudinous of sequences with acutely clumsy staging and framing. Really, this whole production is a gargantuan collision of bad ideas and idiotic forced sentimentality, one whose 120 minute runtime goes by at the speed of a turtle with a cinder block tied to one of its feet. Remember folks, Netflix spent $60 million on The Ridiculous Six, money that could have funded Boyhood (which cost $2.4 million) 25 times over. Imagine if they spent that cash on something with a modicum of value in terms of story telling, instead of a feature that devotes nearly an entire minute to the sight of a donkey dousing Chris Parnell with feces.
Posted by Douglas Laman (NerdInTheBasement) at 8:40 AM