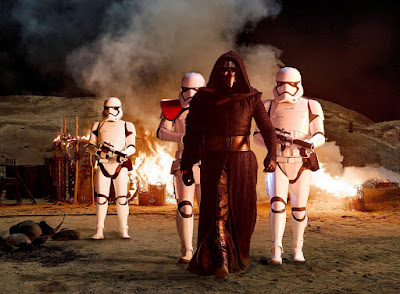 I normally just cover the weekend box office, but Star Wars: The Force Awakens is the sort of box office juggernaut that defies convention, and the numbers it's generated yesterday leave me with much to discuss and analyse. So, the newest entry in this saga set in a galaxy far, far away amassed $120.5 million yesterday, by far the biggest single day gross in history, beating out the previous holder of that record (the final Harry Potter film, which accumulated $91 million on its first day of release) by a massive $29 million. It's also the first time a film has grossed $100 million in a single day and has surpassed the previous biggest December opening weekend of all-time (the $84.6 million haul of the first Hobbit movie) in one day. This is utter insanity, to put it gently.

Of course, that comes with a massive asterisk, as The Force Awakens, like the majority of films since Fall 2012, started screening at 7 PM on Thursday, and the cash it made from those Thursday night showings has been folded into its Friday sum. The Force Awakens made a record breaking $57 million from Thursday night screenings, meaning it grossed $63.5 million on Friday. In terms of stand-alone Fridays, it's tied with the $63.5 million sum Jurassic World made back in June for biggest stand-alone Friday of all-time.

So, where does The Force Awakens go from here? Hard to say; if it follows the opening weekend path of 2009 blockbuster that opened on December 18th Avatar, it would make about $348 million of the weekend, which is not gonna happen since The Force Awakens has those massive Thursday night showings fueling its opening day sum. Look for it to be far far far far more frontloaded, though it's still gonna make gobs of cash over the weekend, and I'm not gonna be shocked if it manages to claim $250 million in its opening weekend. Looks like Star Wars hasn't missed a beat in its decade long absence from the big screen (unless one counts the theatrical Clone Wars film in 2008 of course).

Believe it or not, there were other movies opening yesterday, two to be precise. Of the duo, Sisters, the newest Tina Fey and Amy Poehler comedy, made the most money, grossing $4.9 million, $769,000 of which came from Thursday night screenings. Look for this R-rated comedy to pull in $13.5 million for the weekend. Just behind it was Alvin And The Chipmunks: The Road Chip, grossing $4.1 million and will likely end up having a larger opening weekend than Sisters since, being a family movie, it'll get a bigger boost from family audiences coming out to movie theaters on Saturday. Alvin and his furry friends are heading for a $14.3 weekend, which is approximately 67% below the $44.3 million opening weekend of the very first Alvin And The Chipmunks movie 8 years ago.

Check back tomorrow for an analysis of the opening weekends of Star Wars: The Force Awakens and the other new releases as well as an examination as to how box office holdovers held up in the face of Kylo Ren.
Posted by Douglas Laman (NerdInTheBasement) at 10:32 AM