Star Wars: The Force Awakens Celebrates A Day Of Peace, A Day Of Harmony By Demolishing Every Box Office Record In The Book Over The Weekend 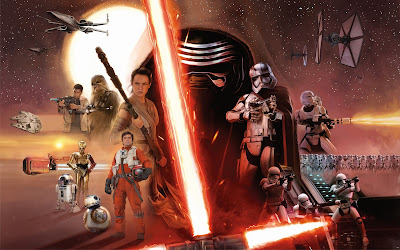 I don't know if y'all heard about this one, but a new Star Wars movie opened over the weekend. And it did pretty strong business too, with the film pulling in audiences like a tractor beam to the tune of $238 million. That's by far the biggest opening weekend of all-time (the previous holder of that record was the $208 million opening of Jurassic World) and out-pacing the previous biggest December opening weekend (the $84 million bow of The Hobbit: An Unexpected Journey) by 278%.

A new Star Wars movie was always gonna be a huge event, and Disney's excellent marketing for the film did a remarkable job maintaining the hype the film was generating simply by existing. Ads established a fun and inviting atmosphere while keeping plot points and certain characters (namely perennial franchise character Luke Skywalker) hidden. This level of interest only maximized once the extremely positive reviews (it's currently the fourth best reviewed move of 2015 on Rotten Tomatoes) pouring in. Considering this film got an A CinemaScore, it's fair to say audiences were similarly enthralled by the film.

So, where does The Force Awakens go from here? The extended holidays over Christmastime are some of the most beneficial for a feature film at the box office, and it wouldn't be shocking if The Force Awakens got a massive boost from Christmas Day business next week. At the moment, I'll simply wager that it does "only" three times its opening weekend and makes $720 million domestically. If it hit that mark, that'd be good enough to be the 21st biggest movie of all-time adjusted for inflation, though, interestingly, that would put it behind all the Star Wars movies in terms of attendance except for Attack of The Clones and Revenge of The Sith.

So yeah. Biggest opening weekend of all-time, already making big bucks overseas and heading for at least a $700 million domestic cume. It's fair to say this is a successful enterprise for all involved. Hell, I won't be shocked if this films success spurs the creation of a spin-off film entirely focused on the son of Chewbacca, Lumpawaroo AKA Lumpy.

Two other new releases this weekend attempted to combat the reawakening of The Force, with the highest grossing of the two films being Alvin And The Chipmunks: The Road Chip, which went swerving off the road to the tune of $14.4 million. For comparisons sake, that entire opening weekend is only 5% better than the opening day of the first Chipmunks film and a whopping 25% below the opening day of the first Chipmunks sequel. Hell, it's even 10% below the oepning weekend of fellow live-action/CGI animated TV show adaptation Yogi Bear, which also opened in the weekend before Christmasd corridor.

How did this one go so steeply downhill from its predecessors? Simple; the marketing didn't offer anything new or exciting to potential moviegoers. Remember, the first film had the novelty of seeing these characters in a live-action environment for the first time, the second one introduced longtime franchise mainstays the Chippetes. The third entry in this "saga", Chipwrecked, already suffered a huge domestic box office plunge by coasting on the laurels of past Chipmunks adventures, and doing the same thing here only further depleted box office grosses. Doesn't help that most families were likely super preoccupied with rediscovering the Force this weekend.

Meanwhile, the third new release of the weekend, Sisters, fared solidly, grossing $13.5 million for the weekend. That's a far from record breaking number, but given it's $30 million budget, the film didn't need mammoth grosses to be profitable. This one was most likely kept back from becoming a box office behemoth thanks to ads that didn't have any really memorable or noteworthy gags and more mixed reviews. This one should still make it past $50 million with ease thanks to the forthcoming extended holiday, and I wouldn't be shocked if it wound up gross $60-65 million domestically.

Rounding out the top five were two holdovers from November, with fourth place going to The Hunger Games: Mockingjay: Part Two, which dropped 50% from last weekend for a $5.6 million for a $254.4 million domestic haul so far. That's a far harsher fifth weekend dip than any of its predecessors, but then again, none of them had to face a film of the magnitude of The Force Awakens at this time in their runs. Meanwhile, Creed completed the top five, losing 50% from last weekend for a $5.08 million fourth weekend for a 26 day total of $87.9 million. In eighth place was In The Heart Of The Sea, which sprung a massive leak in its second week of release by crumbling 69% for a $3.4 million gross this weekend, having now amassed a ten day total of $18.6 million.

In sixth place was The Good Dinosaur, which felt the burn of Star Wars and Chipmunks gunning for family audiences. The first box office dud from PIXAR plummeted 59% from last weekend for a $4.2 million fourth weekend and a 26 day total of $96.5 million. Shockingly, despite being a horror film (traditionally, horror movies drop like a stone at the box office after their opening weekends), Krampus held better than The Good Dinosaur, coming in at sixth place by losing only 55% and adding another $3.78 million to its current total of $34.8 million. Rounding out the top ten were two features hailing from India, both posting great sums in their opening weekend. In ninth place was Dilwale (grossing $1.87 million) and in tenth place was Bajiro Mastani (which grossed $1.66 million), both films managing to gross that much cash despite both being in under 310 theaters.

The Top 12 this weekend grossed $294 million, making it the biggest weekend of all-time and up a massive 132% from the same weekend last year when the final Hobbit movie started its box office run. Needless to say, it looks like such box office fortune won't just vanish after this weekend and it will certainly a be a prosperous Life Day for the box office this year.
Posted by Douglas Laman (NerdInTheBasement) at 3:44 PM