Hooray For The 10th Anniversary Of LAIKA! 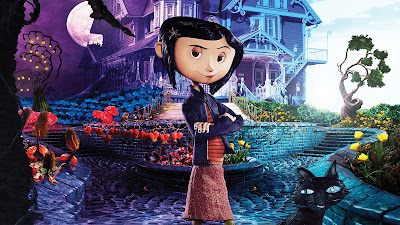 While Illumination Entertainment prides itself on endless Minion marketing extensions sequels, Blue Sky Studios is sucking the already dead Ice Age franchise beyond dry and even PIXAR can't escape the allure of Toy Story 4 and Cars 3, there really is something kind of incredible about LAIKA,the Hillsboro, Oregon based animation studio responsible for Coraline, ParaNorman and The Boxtrolls. Founded 10 years ago this month, the studio released their first feature, Coraline, in February 2009 to huge critical acclaim and surprisingly strong box office and have followed that up with two features that don't the scale the box office heights of Despicable Me, but consistently get great reviews and awards nominations (all of the studios films have been nominated for Best Animated Feature).


For me personally, I love this studio and all they stand for. Their first two features, Coraline and ParaNorman, are stone cold classics, and while Boxtrolls is far weaker than those two (mainly because it's a more overtly comedic feature whose comedy doesn't work all that often), it's still a visually pleasing endeavor that at least tried to do something different. That's likely the most notable consistent quality amidst the studios small filmography; ambition. I mean, you have to have that quality if you're trying to make a major animation studio entirely centered around making stop-motion animated features, and it's awesome to see that extend to their writing as well. For instance, few movies, family-friendly or otherwise, would have the gall to go as dark and thoughtful as the climactic scenes of ParaNorman.

It's nice that on this momentous occasion LAIKA has put out a video commemorating their decade of work. Only their in-house feature films are recognized in this montage, so no glimpses of their Harry Selick short film Moongirl or their contract work on Corpse Bride and A Very Harold & Kumar 3D Christmas to be found here. But you still get to hear the President of the studio Travis Knight talk about all that LAIKA has accomplished in a decade and see the astonishing work that goes into building the worlds of these movies. Among those features seen in the video is their next motion picture, Kubo And The Two Strings, which looks absolutely incredible from an animation perspective alone. Looks like LAIKA is once again pushing artistic boundaries and I for one am happy as hell that they are.

Here's to another decade LAIKA! I can't wait to see what the future holds!

Posted by Douglas Laman (NerdInTheBasement) at 10:30 AM

Email ThisBlogThis!Share to TwitterShare to FacebookShare to Pinterest
Labels: Coraline, Kubo And The Two Strings, LAIKA, Paranorman, Stop-Motion, The Boxtrolls