Warning: This is a spoiler free review of The Force Awakens, but thanks to the uber secretive marketing, pretty much every aspect of the film is being kept under wraps. Ya wanna go into this one colder than the Snow Miser? Don't read this review, which won't spoil plot twists or spoilers, but will basic information about the characters that hasn't been spelled out in the TV advertisements. 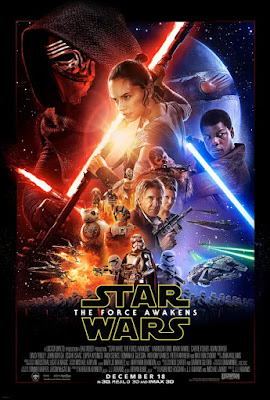 During the 135 minute running time of Star Wars: The Force Awakens, there is nary a glimpse of Max Rebo or any other member of his blue, super adorable, pachyderm resembling species. Therefore, I dub this film a failure of the highest order and ask J.J. Abrams to spend the rest of his life in a Yoda-esque exile.

OK, OK, all super nerdy Star Wars joking aside, let's march onward with the review of what's likely the most anticipated film in the past decade.

Probably the most impressive thing I can say in regards to Star Wars: The Force Awakens is that it manages to justify its own existence as a separate piece of storytelling amidst a swath of merchandising and marketing. Few franchises (save for Cars and Frozen) generate the amount of revenue spewing products that Star Wars, with the mere presence of an Ewok or Boba Fett on something like a backpack all but assuring profit. So even I, the eternal optimist who hoped against hope last summer that Michael Bay could turn things around with the fourth Transformers movie (I was so wrong in that matter, incidentally), couldn't help, despite some awesome trailers for it, but have cynicism tinge my expectations going into The Force Awakens.

After all, this was the first movie in the Star Wars franchise to be released by the movie studio king of merchandising, Disney (who run the aforementioned two film based toy lines, Cars and Frozen, that rival Star Wars in yearly earnings). I had a hunch this movie would turn out to be nothing more than an extended toy commercial, the podracing sequence from The Phantom Menace on steroids. But thankfully, my disturbing lack of faith (for those that don't get it, that's a Star Trek reference) proved to be ill-placed, as The Force Awakens does a fine job of revitalizing this tired franchise with extreme success.

Perhaps the most sterling accomplishment of the film is the new characters, with the feature settling on two particular individuals to serve as the audience POV into reintroducing the masses to this galaxy far, far away. The duo in question are Rey (Daisy Ridley), a scavenger and a loner, and Finn (John Boyega), a morally conflicted Stormtrooper working for an evil organization dubbed The First Order. Both Rey and Finn work exceptionally well a standalone characters in their own right, their individual arcs covering different emotional territory and being paced within the plot in a most sufficient manner.

Helping out the acute likability of these characters is the actors playing them, with Ridley and Boyega doing an excellent job of making their personas appropriately come off as being everyday people caught in a larger than life situation. They react to monsters, foes and engaging in combat for the first time in a natural manner that helps one warm up to them instantly. Boyega channels an ungainly but winning personality that's impossible not to get wrapped up in a Finn, a disposition that leads to a number of humorous moments in the story. Ridley, meanwhile, is a helluva find, one whose terrific work in this film (particularly in her more emotionally strained and badass moments) will, if there's any justice in the world, skyrocket her to the top of the A-list ASAP.

Like I said, these two soon find themselves on a new adventure soon enough, one that intertwines them with a number of the characters from the original trilogy. The Force Awakens mostly avoids gratuitous fan service (I say mostly though; there is one aggravatingly extraneous moment involving the Millennium Falcon holographic game Dejarik) in favor of focusing on its own tale. Certain aspects of the plot feels cribbed from past features, primarily the original Star Wars, though the unique and intriguing character motivations help that particular foible feel less grating than it might have been under different circumstances. Let me put it this way; the familiar elements that crop up here are nowhere near as irksome as when J.J. Abrams last film Star Trek Into Darkness just threw in Khan for no good reason. Here there's at least different motivations for a familiar big bad guy plan or for having our protagonist (Rey) be living on a dessert planet when the story gets started.

All that praise being said, I do wanna make mention of two particular quibbles I have with the script; one if that the way Han Solo (Harrison Ford) is brought into the story is...well, let's say convenient enough that it took me out of the film. The other is probably the most glaring flaw of the picture, which is the abrupt ending that is all too obviously leaving off plot threads for future follow ups (the first of which, Episode 8, will arrive on May 26, 2017). Save this sort of overt sequel seed planting for the after-credits scenes instead of shoehorning it into the feature itself at the detriment of the overall narrative.

Above all else, it should be noted that the motion picture is seriously fun to watch, with Abrams showing real finesse in the action sequences. There's some much appreciated variety in terms of what spectacle shows up (dogfights, hand-to-hand combats, even a brief run-in with some monsters all appear to deliver thrills) and that the more kinetic camerawork eschews shaky-cam and the stagnant visual styling of the prequels in favor of a more involving imagery technique  when it comes time for lightsabers/blasters and other such weapons to be pulled out.

Star Wars: The Force Awakens is not a life-changing cinematic experience. It's not quite at the caliber of Episodes IV and V in this saga, and it's certainly not a modern day blockbuster that reinvents the wheel like Mad Max: Fury Road and The Avengers. But ya know what? It's still pretty damn great, a burst of sci-fi fun that manages to deliver a ton of new interesting characters (I didn't even get a chance to discuss the endlessly charming Poe Dameron, played winningly by Oscar Isaac) and several moments that'll go down as some of the most iconic in Star Wars lore. Rest assured, Star Wars: The Force Awakens is far, far away from being another Phantom Menace, instead being an excellent example of how to continue an age old franchise in a way that proves there's some real merit in keeping Star Wars around in this day and age.

And now, to celebrate having a great modern day Star Wars film in our midst, let's have some part music! Hit it Max Rebo!