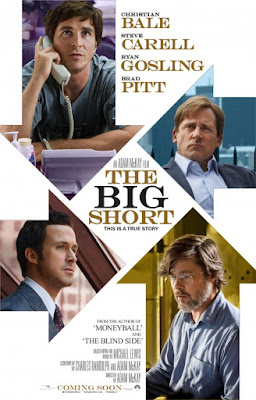 All pieces of writing, no matter what form (i.e. as a book, as a film, as a song) they take, intend to provoke some kind of reaction. Certain pieces of media look to make those who consume it laugh, other creations intend to sweep up its participants in sensations of euphoria. The Big Short makes it abundantly clear from the get-go that it wants nothing more than to send its viewers into an all-consuming mouth-frothing rage over the injustices that led to the financial meltdown of 2008. And, yeah, by the end I had more than a hint of resentment bubbling for the various figures at Wall Street who allowed this catastrophe to occur and got away from the calamity scott free.

Just as I know what sort of emotions this new Adam McKay feature wants to stir up in its viewers, I also am aware of an even more indisputable fact; The Big Short is one of the most unique features of 2015, one whose anarchic spirit drives a tale of deception, cash and Ryan Gosling phone calls. To be more specific, its premise concerns a select group of individuals, namely Mark Baum (frequent McKay collaborator Steve Carell) and Michael Burry (Christian Bale) realizing that a financial meltdown related to the housing market is inevitable, and deciding to use such this inevitable calamity to their financial benefit.

Any story set in the environment Wall Street is inevitably gonna use enough jargon and terminology to make my head swim like it's fighting against the tide of Niagara Falls, but perhaps one of the most brilliant aspects of The Big Short is how it's able to explain the parlance of Wall Street in an entertaining fashion. From the get-go, the feature is executed in a way that's reminiscent of documentaries (handheld cameras seem to be used frequently for instance), and this style of filmmaking allows for narration from Ryan Gosling (whose vocals are done in-character as his role in the film, investor Jared Vennett), whose no BS demeanor makes him quite a fun guide through this morally murky world.

But this approach goes beyond just conventional narration; still imagery, words and even cutaways involving real life celebrities are utilized to ensure that everyone in the audience can understand the lexicon of this domain. It's an inventive trick that, thankfully, doesn't detract from the plot or characters, these flourishes serve a purpose beyond just being idiosyncratic. Oh, and speaking of The Big Shorts characters, the screenplay by McKay and Charles Randolph has a sweeping ensemble nature that allows for actors like Rafe Spall, Jeremy Strong and John Magaro to turn in notable supporting turns.

Meanwhile, with our leads, Carell plays an anger-fueled individual whose personal turmoils manage to intersect with his financial exploits in a manner that manages to come off far more organic than it would sound conceptually. Bale as Michael Burry plays one of the best cinematic depictions of a person with Asperger's Syndrome I've seen in many a-moon, playing Burr as a person with unique characteristics stemming from his Asperger's rather than a Sheldon Cooper-esque individual. And lest I forget, Gosling is spectacular in the film, playing the most overtly comedic character in the feature, and goddamn can Gosling pull off this sort of personality. A scene where he communicates with Mark Baum in a bathroom alone is a masterstroke.

The Big Short has plenty of time for comedy (McKay certainly doesn't forget how to properly set up jokes visually from past efforts like Anchorman and The Other Guys), but don't think it's playing up this real life tragedy for simple gags. No no, in fact, the best tonal slight of hand it pulls comes in its final sequences in revealing that The Big Short is all too aware of the chaos and suffering endured by the majority of Americans once the economy went down the tubes. Our cast of characters emerge from this film not euphoric over their newfound financial success, but rather, disillusioned with a world stuck in an endless cycle of excess and greed. By the time the credits begin to roll, I was enraged at the injustices of the past, doleful at those families who lost their homes and livelihood, and impressed by what a fantastic film The Big Short had ended up as.
Posted by Douglas Laman (NerdInTheBasement) at 11:02 AM