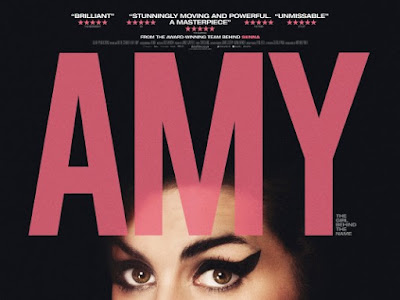 So many new musicians are unveiled to the world as a the newest "rags-to-riches" story, someone just like the folks who are buying and listening to all of these musics. It's partly a marketing scheme, one that helps potential purveyors of tunes to feel like the artist in question is "one of them", but also a way to inspire potential up and coming artists, which I suppose could be construed as an extension of marketing itself. Amy Winehouse, the subject of the documentary Amy, was that sort of individual who really was your average everyday individual thrust into the limelight because of her incredible vocal abilities.


As someone previously unfamiliar with the work of Amy Winehouse, discovering her music in this documentary was an illuminating experience. To put it simply, Winehouse had astonishing talent, with a voice seemingly ripped straight out of the 40's and 50's. No wonder one of her idols was Tony Bennett, her various songs fit into that type of music like a glove. Yes, this was truly a gem of an artist that doesn't come around every day, but like I said, she was just an ordinary person at heart. She hadn't been raised in the overstimulating and all-consuming lifestyle that stems from being a well-known figure.

The culture shock of going from anonymity to rampant paparazzi is, I'm sure, a massive one, and various parts of Amy have footage that follows Amy Winehouse directly into the swarm of individuals clamoring for a photo or quote from her. Whether she's walking down the street or even in intense personal moments, they're relentless. This and countless other elements had her looking for a way to escape what her life had become. Her outlet of choice to find serenity in? Rampant usage of both drugs and alcohol.

We all know how this story concludes. The tragic passing of Amy Winehouse on July 23, 2011 looms over the entire film, casting footage of what was at the time innocuous enough events feel like world-altering cataclysms in the grand scheme of her life. As I believe a drug counselor notes in the film, no one around her wanted the financial gravy train stemming from her music to stop. And any sort of rehab might have put all of that in jeopardy, leaving Amy in a constant state of flux, with times of sobriety interspersed with nights of potentially fatal drug use.

It's extremely chilling to watch Winehouse's tragic ascension to fame considering the darker circumstances luring around every corner. Director Asif Kapadia is obviously not looking to use this young woman's tragically short life to earn some brief publicity, but rather, wants to inspect her career and see what happened. He and editor Chris King do an excellent job utilizing the gargantuan amount of footage at their disposal to emphasize the human being the person Amy Winehouse was amidst all of her turmoil. She was a swinger, she was a person, and yes, she had her demons that eventually did her in. It's all so goddamn heartbreaking to watch, particularly in later sequences like one showing her intoxicated at a concert and being unable to perform.

As she fumbles around, the crowd begins to boo, demanding their money back if she doesn't perform. Like I said, it's grueling footage, but thankfully, it never crosses the line into feeling exploitative. Amy Winehouse serves as a cautionary tale for those dealing in any lifestyle struggling addiction, but this movie shows how her devastating passing shouldn't be the only thing she should be remembered for. Amy Winehouse, above all else, was a damn good singer, and I'm grateful Amy now exists to remind the world of this simple but crucial fact.
Posted by Douglas Laman (NerdInTheBasement) at 3:05 PM