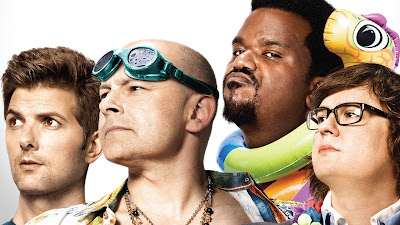 My Best Movies of 2015 list won't be up until mid-Janaury, since a number of high profile 2015 releases (like The Revenant, Son of Saul and Anomalisa) won't be coming to a theater near me until next month. In the meantime, how about I run down my 10 least favorite films of 2015, huh? This should be...well, interesting.

10. Mortdecai
I almost considered taking this one off my worst of the year list. Hasn't Mortdecai become a bit of an easy punching bag for film fans everywhere? Then I remember the painfully unfunny jokes and the way it wasted a super talented cast (poor Ewan McGregor, dude deserves far better than this), and yeah, I'm reminded that it more than deserves a spot on this list.

9. The Ridiculous Six
The fraught expression plastered on Adam Sandlers face during the entire running time of this "comedy" leads me to believe he was experience almost as much pain starring in this film as I was watching this garbage. Seth MacFarlane, rest easy, you're western comedy that went awry looks like an absolute masterpiece compared to this dreck.

7. Unfinished Business
Unfinished Business appears to be the result of someone at 20th Century Fox pondering aloud "What would happen if we took the raunchy material of a conventional Vince Vaughn comedy and sprinkled in a bunch of After-School Special bullshit about cyberbullying that doesn't fit in at all tonally with the comedic parts of the film?" For some ungodly reason, nobody bothered to say that was a terrible idea, and what was unleashed onto the unassuming masses was one of Vince Vaughn's worst movies. And that's saying something considering the dude starred in The Watch.

6. Aloha
Seven months later, I still don't know what the hell was going on in Aloha. Emma Stone was playing someone of Asian descent, Bill Murray was serenading his version of The Wheels On The Bus Go Round And Round to Bradley Cooper and a satellite blew up in the end. At least this one spawned an excellently terrible trailer that played like a top-notch parody trailer, complete with the somehow real tagline "Sometimes You Have To Say Goodbye....Before You Can Say Hello".

5. CHAPPiE
There are one or two spots in Chappie where the film is so oblivious of its own egregious tonal flaws, it appears that the production might be veering into becoming something potentially charming. Alas, that never occurs, and all I as a viewer am left with is a pointlessly cruel story (a dude who leaves Chappie to die becomes our hero without him ever going through some sort of arc of redemption) that offers no entertainment, no interesting concepts and not even any moments in the film that are bad enough to generate giggles. Oh, and I also discovered that apparently director Neil Blomkamp believes the image of Hugh Jackman canoodling with a soccer ball is apparently the sort of striking visual that screams "BAD GUY".

4. Insurgent
Can this franchise just die? No? I gotta go through two more of these? Christ on a cracker. If the next two installments are anything like Insurgent, then I need to brace myself for more inert romantic chemistry and disastrous directing. Shailene Woodley, Naomi Watts, Ansel Elgort, Miles Teller, Kate Winslet, Octavia Spencer, you all deserve better than getting your considerable talents wasted in this trash. Let me put it this way; when Jai Courtney (who I've seen do well in other movies but is lifeless as hell here) is one of the most charismatic actors on-screen, you're in deep shit.

3. Get Hard
As someone who loves Anchorman, Elf, Zoolander and The Other Guys, it's been pretty dispiriting to see Will Ferrell on such a cold streak lately (I haven't seen Daddy's Home yet). But whereas The Campaign and Anchorman 2 were just middling, Get Hard is a rampantly homophobic venture that suffers from a disastrous lack of laughs. Oh, Ferrell gets one or two chuckles, but it's all spaced out in a sea of hideously undercooked jokes executed in a clumsy manner, particularly in the editing department, which is so atrocious it undercuts all of the jokes in this movie before they can even get going.

First off, it's a testament to how bad the worst movie of 2015 is that Pixels somehow isn't the absolute nadir of cinema that I experienced in the past 12 months. Adam Sandler and his cohorts (this time dragging Mrs. Doubtfire and Home Alone director Chris Columbus into the mix) never miss a chance to create jokes that emanate pervasive awkwardness more than anything else, and hey, speaking of awkward, the romance between Sandler and Michelle Monaghan is played off in a "cutesy" manner, but comes off more like Monoghan being stalked by an emotionally stunted sociopath. Plot points delve into incoherence by the time the climax arrives (a duel with Pac-Man results in Peter Dinklage using a cheat code in real life, and no, it's never explained how that works or even handwaved away in a humorous fashion), rendering my headline of my original Pixels review perhaps the best way to summarize this cinematic cataclysm: Pixels Is Almost As Bad As Gamergate.

1. Hot Tub Time Machine 2
Folks, I'm gonna toss off the shackles of critical analysis for this one and just fully embrace go-for-broke hyperbole here, OK? I mean, this movie was so excruciating to watch, I kind of feel it'll be a cathartic experience to do this.

Hot Tub Time Machine 2 is like a 93 minute descent into the very bowels of Hell itself, though I'm not so sure Hell would be as uncomfortably homophobic as Hot Tub Time Machine 2. Delivered with all the production value of a bleach commercial from 1991 airing at 3 AM, Steve Pink has delivered a stunning example of experimental cinema intended to demonstrate how little of a cohesive story is needed to drive an actual motion picture. Who needs interesting characters, an engaging plot, some semblance of human decency or even jokes in a comedy?? Honestly, the films depravity even hits the heights of being disturbing in some instances, with the features blatant discomfort with women and the concept of same-sex intimacy only becoming more and more off-putting as the film chugs ever onward.

Hot Tub Time Machine 2 is not a film. It's not a comedy. It's not even just a bad movie. It's a cinematic manifesto against all that is good and decent in humanity. Everything in here feels like it was created by a madman, hellbent on challenging all of the things in the world that are "different" from him. There is no element of joy, entertainment, craftsmanship or anything of worth to be found in this piece of shit masquerading as a motion picture. Every second of this motion picture was utter torture to experience and I pray to God no one else in the future has to endure this wretched entity that somehow manages to match Donald Trump in pure unfiltered uncomfortable sexism.
Posted by Douglas Laman (NerdInTheBasement) at 9:32 AM