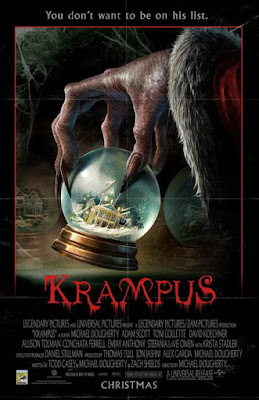 Krampus kicks off its running time with a scene that perfectly exemplifies what's to come tonally; humorous imagery combined with an authentic unsettling ambiance. In this sequence, Bing Crosby's rendition of It's Beginning To Look A Lot Like Christmas plays over the visual of swarms of shoppers descending on a mall looking for gifts for the holidays. A lost sobbing child is ignored as individuals trample each other to get that very last XBOX. It doesn't take a Walter Alvarez to comprehend the meaning of this scene; before the titular beast even descends into the features plotline, there's already plenty of terror one can easily experience at this time of year.

Once that mall melee is out of the way, we get fully introduced to our main characters. Married couple Tom (Adam Scott) and Sarah (Toni Collette) are preparing for spending the Christmas with their gun-toting rowdy relatives, among them Sarahs sister Linda (Allison Tolman), her husband Howard (David Koechner) and surly Aunt Dorothy (Conchata Ferrell). A scene that has these various quarreling family members converge over a holiday dinner fraught with social awkwardness is a smart move from a storytelling perspective considering how it helps establish the dynamics and conflict between the sundry of relatives in an organic manner.

All of this bickering and tension soon has Tom and Sarahs son, Max (Emjay Anthony) losing his Christmas spirit, a development that beckons the presence of Krampus, a figure from ancient German folklore out to punish the wicked. How does he punish them? Well, that's where Krampus really comes alive as a Christmas horror film, with the various minions of this dastardly figure taking the form of creatures like gingerbread men, jack-in-the-boxes and toothy teddy bears. You can practically hear screenwriters Todd Casey, the films director Michael Doughterty and Zach Shields cackling over each new Christmas pastiche they convert into something from Buddy The Elf's worst nightmares.

The actors are all super game for these antics, equipping themselves well to the features tone that manages to deftly balance comedy and horror in equal measure. Scott and Collette do well portraying a content, if slightly distant, couple while Tolman and Ferrell steal the show for very different reasons. Tolman makes her character that could have been just a cliche and brings some real heart to it, with her scenes where she tries to reconnect with her sister being some of the best character based moments of the entire feature. Meanwhile, Ferrell is just deliciously unsavory as the Aunt who has absolutely no filter and provides some of the most amusing pieces of comedy.

The middle portion of Krampus focuses almost entirely on the adults and their evolving relationships with each other as they try to endure the attacks of Krampus and his flunkies, and thought this is a ton of fun to watch, I do wish Max got more to do in this segment of the story. He's the focus of the first few scenes of the film, and when the climax of Krampus concentrates solely on him, it feels a mite peculiar considering he hasn't done much of anything in the past hour of the movie. Balancing out his screentime throughout the movie would have been much appreciated.

It's been eight years since Dougherty last directed a motion picture, and I do hope he doesn't take that long of a hiatus again considering that I found his work here to be quite good. Dougherty really knows how to play with the viewers mind, keeping one on edge for just what may be lurking about beyond the frame. Plus, good call on his part to go for practical effects for the majority of the monsters seen in the film, since their more realistic movements and textures help accentuate a palpable aura of menace, even if some quick cuts during a scene involving some "elves" make the atmosphere more disorienting than terrifying (I have a hunch such an editing choice that obscures some of the intensity was done in order to ensure the films PG-13 rating). He's made a damn good horror Christmas film, one whose enjoyably inventive spirit is hard not to get wrapped up in.
Posted by Douglas Laman (NerdInTheBasement) at 10:44 AM