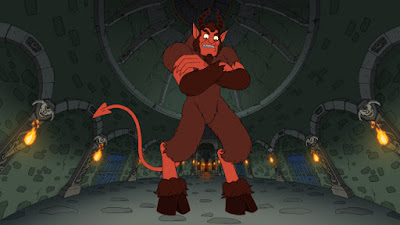 Movie studios typically use this post-Thanksgiving weekend as a dumping ground of sorts, with such critically acclaimed films like The Warrior's Way and Awake being released at this time of the year. But for the first time in a decade (when the 2005 feature Aeon Flux debuted, to be precise), a movie opened to over $10 million in this post-Thanksgiving slot. That film? Krampus. We'll get deeper into that one in a moment though, as first we must set our sights on this weeks box office champion, The Hunger Games: Mockingjay: Part Two. For the third week in a row, Katniss Everdeen ruled the roost, taking in another $18.6 million, which is a 64% dip from last weekend, and bringing its domestic cume to $227.1 million. That 64% drop is about the same as the 65% third weekend decline of Catching Fire. At it's current rate, the final Hunger Games feature will likely close out with about $265-270 million.

Back to Krampus, which came in at second place, the films $16 million debut was the 10th best opening weekend on record for a Horror Comedy, while also providing Legendary Pictures with a much needed solid hit after box office bombs like Blackhat and Crimson Peak. Krampus benefited from having a unique premise (a horror Christmas feature) and for being unlike anything else in the marketplace, a more frightening alternative to friendly dinosaurs and boxing superstars. Also smart of Universal to take advantage of this dormant weekend to release the film, as it didn't have to compete with higher profile titles like it would have if it had been released over Thanksgiving or the week prior to that.

Two of last weeks newcomers were almost tied for third place this weekend, so we'll see who gets sorted where when the actuals come in tomorrow afternoon. For now, Creed came in it at third place, it's excellent word-of-mouth buoying it to a $15.54 million second weekend and a strong 48% drop. Most films lose over 50% in their post-Thanksgiving weekends, so the fact that a high profile wide release like Creed could have dip under that mark is quite impressive. Creed has now taken in $65 million domestically and will have no problem taking in over $100 million when all is said and done.

Right behind Creed was the newest PIXAR film The Good Dinosaur, which looks like it's on its way to become the first box office dud from the studio. Taking in only $15.51 million over the weekend, it lost 60% from its opening weekend. Family moves typically have the harshest post-Thanksgiving plummets, but this is still a much larger second weekend drop than recent Thanksgiving family films from Disney like Tangled (which lost 56%) and Frozen (which lost 53%). While the extended holiday period will easily get it over $100 million, it looks like A Bug's Life will no longer be the lowest grossing PIXAR movie domestically.

Spectre rounded out the top five, losing 57% from last weekend to add another $5.4 million to its $184 million domestic haul. Fellow Sony/Columbia November title The Night Before was right behind 007 in sixth place with a solid 41% drop resulting in a $4.9 million third weekend for a domestic gross just under $32 million. Repeating in eighth and ninth place were Spotlight and Brooklyn respectively, with Spotlight adding $2.9 million for a current domestic cume of $16.6 million and Brooklyn adding another $2.4 million for an $11.2 million domestic total to date.

Chi-Raq debuted this weekend in 305 locations to some solid numbers, nabbing $1.25 million for a $4,099 per theater average. Not a bad start for Amazons first foray into theatrical features. Two other features debuted in limited release to OK numbers; Youth grossed $80,000 at four theaters for a solid $20,000 per theater average, while, unlike the works of William Shakespeare, it looks like the newest take on Macbeth won't be enduring, as it only brought in $67,868 from five locations for a $13,574 per theater average.

Finally, returning arthouse fare Carol and The Danish Girl stayed in 4 theaters, with Carol having another tiny drop of only 25%, its $147,241 cume this weekend (which amounts to a $36,810 per theater average) brings its domestic gross to $817,119.  The Danish Girl had a harsher drop in its second weekend, losing 43% for a $106,000 weekend gross that takes it domestic gross to $351,732. Oh! Almost forgot; last weekends big box office turkey Victor Frankenstein lost 71% this weekend and has now barely eked past $5 million domestically.

The top 12 this weekend gross $89.9 million, a sharp 27% increase from this weekend last year nad way above average for a post-Thanksgiving weekend.
Posted by Douglas Laman (NerdInTheBasement) at 11:33 AM