The History of Cinematic Superhero Costumes, From The Leather Clad X-Men To Benedict Cumberbatchs Doctor Strange 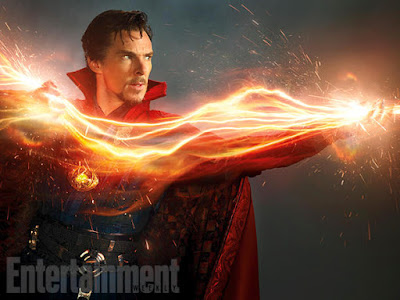 In the realm of comic books, superheroes tend to fly into battle against evildoers donning colorful costumes that sometimes ended up being as iconic as the characters themselves. But for their cinematic counterparts, it's taken awhile for such attire to come to the big screen looking accurate to its comic book roots. You can mainly thank Batman & Robin for that; after that film loaded up on the color and visual razzle-dazzle, future comic book movies intended to avert being compared to that 1997 Joel Schumacher disaster by decking out their superheroes in the most drab garbs imaginable.

When the X-Men arrived in the form of a live-action film for the first time three years later in 2000, gone were their well-known yellow outfits, and in their place were generic leather outfits. Even after Spider-Man made a killing at the box office donning his classic red outfit in 2002, studios still seemed to fear the more outlandish costumes of the characters they were adapting, hence why it took until 2011 for the X-Men to get their traditional yellow costumes (which, by the way, looked fantastic), why Galactus appeared as a cloud in Fantastic Four: Rise of The Silver Surfer and why Deadpool didn't get to wear any red in his appearance in the wretched X-Men Origins: Wolverine.

Then the Marvel Cinematic Universe happened. And all of a sudden, a shared universe created by a studio run by self-professed comic book geeks, things started to change when it came to the costumes of movie superheroes. The individuals behind these motion pictures realized that not only were those original costumes visually appealing, in many cases, these spandex outfits held a kind of thematic resonance with whatever character was donning them. In 2008, Iron Man leaped onto the silver screen looking like...Iron Man! Huh! How about that? Loki get to wear his awesome horn helmet in Thor, while the titular lead of that movie got to have his hammer, his red cape, everything! And Captain America didn't shy away from embracing its protagonists patriotic outfit, which also looked great.

Has every superhero translated from the comics to the silver screen with their entire costume intact? Oh, of course not. Hawkeye ditched his purple look for a more Bryan Singer X-Men-esque appearance in The Avengers, though at least he's gotten more colorful in successive appearances. Many of the chances, though, have also been for the better, particularly when it comes to female super heroes. In the comics, women were typically designed as eye candy first, with midriffs constantly being bared and breasts flying up in the air like they were praising Jesus. While Black Widow retains her black catsuit from the comics, the likes of Sif, Scarlet Witch and Gamora get outfits that actually reflect the fact that they're going into combat instead of looking like they're heading to the set of the adult film parody of The Avengers.

Several modern day superhero movies seem to still struggle with embracing the costumes that inspired them, with a character like Aquaman leaping into live-action looking more like a generic 300 rip-off than anything resembling Aquaman. Now, to be fair, character designs do not a good movie make, that's for sure. Let's not forget that The Amazing Spider-Man 2 had the best cinematic Spider-Man costume, hands down, and was also easily one of the worst superhero movies of all-time. But it sure does go a long way to saying you have some faith in these characters, and for female characters, it can be a great sign that you're looking to treat women in your movie as characters rather than just objects to boost up your products sex appeal.

This all sprung to my mind yesterday upon seeing the first images of Benedict Cumberbatch as Doctor Strange,  who, holy hell, looks incredible! Yes, it's super accurate to the comic books, but even if this was a completely original design, it's a striking outfit in its own right. The colors pop right off the screen of my computer, his facial hair gives off a "knowledgeable" vibe and the various tiny elements of his costumes (that necklace with the Eye of Agamotto, that belt) help seal the deal on making his attire uber memorable. It's just another example of how the Marvel Cinematic Universe movies have been doing great work with the numerous costumes of their superhero characters.

One other little bit of nerdiness before we get to the other newly released Doctor Strange images; in an interview with the head of Marvel Studios, Kevin Feige, mentions that the Eye of Agamotto is an important item in the films plot because it has the ability to, in his own words, "...screw around with time." Hmmmmm. Y'know, one of those six Infinity Gems (four of which have already been discovered in these MCU films) was explicitly called the Time Gem because of it possessing the power to pull off time travel. And that's one of two gems not yet seen in the Marvel Cinematic Universe. Could the Eye of Agamotto be powered by the Time Gem in the movie universe just like how the Cosmic Cube was powered by the Space Stone and how the Mind Stone powered Loki's scepter? I say: hell yeah, that's almost certainly how they'll connect Doctor Strange to the larger Marvel Cinematic Universe. Even more intriguing is the concept of time travel being utilized in this film. How exactly is that gonna factor into the plot of this feature?

Anywho, here are all the images released from Doctor Strange by Entertainment Weekly: 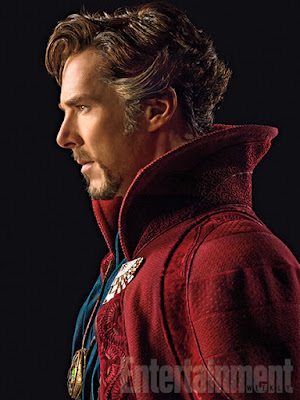 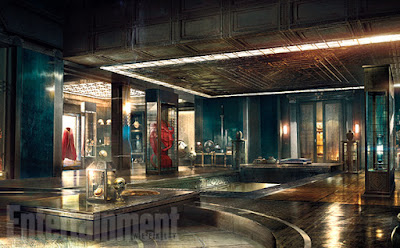 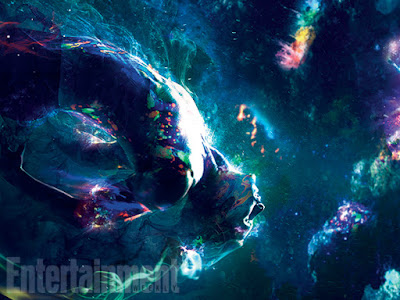 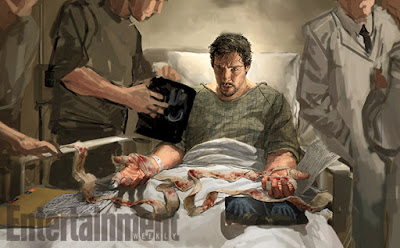 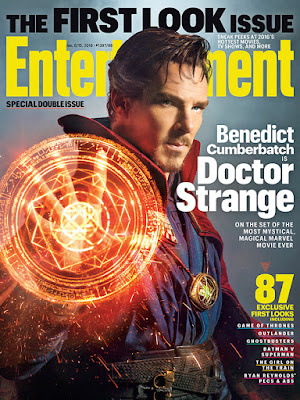