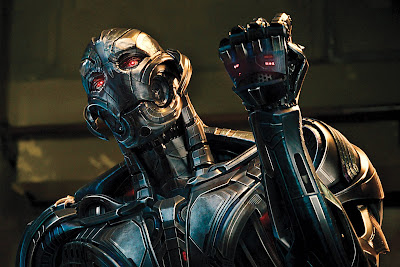 Spoilers for Daredevil, Jessica Jones and Avengers: Age of Ultron.

One complaint lobbed at the Marvel Cinematic Universe on a constant basis is that their villains ain't up to par. I'm not sure if that's applicable to all their films (Alexander Pierce in The Winter Soldier was a chilling adversary and Ronan The Accuser in Guardians Of the Galaxy gets waaaaayyy too much hate), but compared to layered heroes like Iron Man, Captain America or Star-Lord, yeah, I agree that foes like Whiplash, Malekith or The Abomination don't stack up very well. But 2015 brought three very different villains to life that proved that this recurring problem with creating extraordinary enemies might be a thing of the past.

Two of these antagonists come from the Marvel Television side of the MCU, specifically the Netflix programs Daredevil and Jessica Jones. The former show gave the world the second live-action incarnation of Wilson Fisk A.K.A. The Kingpin, played by Vincent D'Onofrio. Instead of just concentrating on Fisk during the period where he's solely the adversary of Daredevil, this program made the wise decision to examine the origins of Fisks temperament through his hideous childhood as well as show him falling in love with a woman named Vanessa. Fisk is still a monster (one who reduces peoples heads to mush via car doors), but there's a human being buried far beneath his psychopathy which makes him all the more thematically engrossing as an individual.

By contrast, what makes the antagonist on Jessica Jones, Kilgrave (David Tennant) so goddamn fascinating is how little actual humanity he has. Some context: Kilgrave is a man whose power of mind control causes all sorts of havoc to those unlucky enough to cross his path, and the titular hero of the show is one such person. I've mentioned this before on social media and various comment sections, but it very much bears repeating; Kilgrave is the perfect embodiment of white male privilege, with this foe being so uncaring to those around him he deems inferior to the point where he can't even comprehend the concept that those he controls might actually have feelings.

Putting that lack of empathy into what physically (not mentally of course) resembles a normal human being just sends this point sailing home, allowing the viewer to realize this kind of disregard for the well-being of others can manifest in other ways, such as ignoring systemic racism or the oppression of members of the LGBTQA community. It's a fascinating take on what could have been a one-note bad guy, and the lengths the writers of the show are willing to take his violence mayhem (forcing his own mother to stab herself to death had me averting my eyes from the screen) adds another gruesome layer to his character.

But it's not just on TV where Marvel bad guys thrive. In the newest Avengers adventure, we managed to get a truly great cinematic adversary....Ultron, played by James Spader. Ultron is a character thriving on contradictions; he practically lathers his dialogue in theology laced monologues (the kind writer Joss Whedon has an incredible knack for writing), yet also can't help but have the incredibly casual personality of his creator (Tony Stark) seep through in some moments like when he wants to apologize to a prospective ally for ripping his hand off. Or how about how he puts on a strong face, trying to come across as the ultimate tough guy in his evil schemes which all stem from him his overwhelming fear of superheroes like The Avengers?

In another film, this kind of juxtaposition could have come across as inconsistent writing. Here, it all adds up to a creating a seriously enthralling villain whose basically a rebellious teenager in mindset with all the destructive force of an arsenal of nuclear weapons. Elegant in his speeches yet malevolent in his actions, Ultron is made all the more enjoyable by James Spader just going to town in making both the characters grandiose and psychopathic moments feel like two sides of the same coin. To boot, Ultrons existential driven inner quandaries lead to some nice small moments, particularly in one of my favorite moments of 2015 cinema when The Vision (Paul Bettany) and Ultron have a brief conversation about the simultaneous futility and beauty of humanity.

You might also notice, having read all my thoughts on these three individuals, that there's a surprising lack of overlap in the personalities of Kingpin, Kilgrave and Ultron. That may be the most exciting part of this trio for me; there's different themes being explored in each character and hopefully that continues in future Marvel bad guys like Daniel Bruhl as Baron Zemo in Captain America: Civil War. Yes, these three cast a long shadow for future antagonists to stand in, but hopefully that pressure will just encourage the writers of future MCU properties to just work all the more harder to live up to the great foes of the past.
Posted by Douglas Laman (NerdInTheBasement) at 9:34 AM