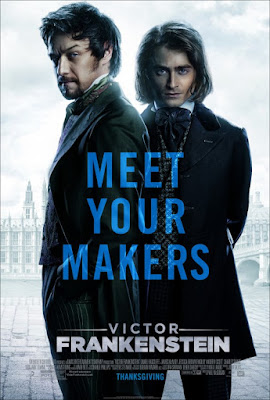 What a waste. That's pretty much the most sufficient way to describe Victor Frankenstein, which wastes some solid production design, costumes, actors and even a decent enough story conceit on...derivative claptrap that only sporadically manages to have its faults become entertaining. Otherwise, this is a by-the-numbers misfire that goes for the most predictable story beats possible despite the central concept of the feature being, like I said, not a bad idea to base a motion picture on.

That notion I'm so keen on is that this tale imagines how Victor Frankenstein (James McAvoy) and Igor (Daniel Radcliffe) met and became comrades in their pursuit to create life. Considering Igor doesn't really have a set origin (unlike the titular scientist and his reanimated beast, Igor did not originate from the 1818 Mary Shelley book Frankenstein), so there's a chance here to possibly do something interesting and have screenwriter Max Landis blaze his own storytelling path with these renowned characters.

That doesn't happen of course. Despite Daniel Radcliffe turning up his sad puppy eyes to eleven in order to elect some sort of emotion from the audience, this films take on Igor just didn't gel for me. Only a scene where he walks upright for the first time in years (Victor gives him a back brace to alleviate him of his hunchback) has some thought put into it, with him otherwise fading into the background until the script calls for him to either cheer up Victor Frankenstein or rebel against him. It doesn't help that his extraneous romance with an acrobatic woman (who performs in the same circus that Igor is stuck in at the start of the story) named Lorelei is...weird, to put it gently. He seems to fall for her at the start of the story without any real context as to why.

It honestly struck me that he may fancy her simply because she doesn't beat him up like the other crewmembers of the circus, which would at least make some sort of sense. You know what makes even less sense? McAvoys performance, which has to be seen to be believed. It's a storm of bad decisions from top to bottom, starting with the scripts take of Victor Frankenstein leaning heavily on the sort of eccentric, witty and lovable personalities of Tony Stark and Jack Sparrow. Unlike those two beloved characters, this version of Victor Frankenstein only achieves the eccentric part of the equation, and even then, I'd call him more erratic than anything else.

See, not only is there more going underneath the shenanigans of Jack Sparrow and Tony Stark, their comedic moments are actually, y'know, funny, two features Victor sorely lacks. His majorly uncomfortable dinner party anecdote about the potential usefulness of a bucket of sperm comes across not as an example of the kind of "rough-around-the-edges" scoundrel ya can't help but love, but rather as someone you want to back away from very very slowly. McAvoys unstable performance seems to be channeling the essence of Nicolas Cage on bath salts, but never comes close to achieving the sort of amusement such a description would imply.

What a shame his acting choices work, because, hey, if it had been executed properly, his outlandish demeanor might have livened up a movie in desperate need of something resembling liveliness. Most of the movie is just such a slog to sit through, with only the clunky as hell finale garnering any amusement from me solely thanks to the hackneyed tragic backstory for its titular lead that the script just pulls out of its own ass. I will give props to director Paul McGuigan for doing passable directorial work (that shot of Igor going out into public for the first time in his purple outfit that clashes with individuals around decked out in head-to-toe black clothing is nice), but otherwise, Victor Frankenstein is dead on arrival.