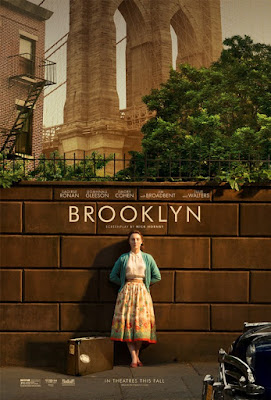 Saoirse Ronan has been steadily climbing her way up the Hollywood ladder for ages now, her breakthrough role in Peter Jacksons only smaller scale 21st century directorial effort The Lovely Bones leading her to be a memorable presence in Joe Wrights excellent 2011 feature Hanna. Since then, she starred in the major though long forgotten box office and critical dud The Host and had a supporting turn in one of last years best motion pictures, The Grand Budapest Hotel. And now, she stars in the 2015 critical darling Brooklyn, and if her astounding lead turn here is any indication, we have not seen the last of her and thank God for that.

Eilis (Saoirse Ronan) is your average young woman growing up in Ireland, creating a life for herself, when she receives the news that she'll be traveling to Brooklyn, New York City for a permanent residence. In her new surroundings, she finds herself experiencing immense difficulty adjusting to her domain, though a romance with a local Italian plumber named Tony (Emory Cohen) does provide some genuine solace for her in a time of intense homesickness.

Probably the most impressive aspect of Brooklyn is how splendid of a job it does examining the emotional rollercoaster Eilis undergoes while trying to adapt to her new surroundings. Nick Hornbys screenplay is in no rush to just glide through the various predicaments Eilis finds herself in in America, instead going for a slow-burn approach to addressing the ways her newfound domain is affecting her psyche. An early scene showing her at her day job in Brooklyn, attempting to help a customer whilst in a somber mood, sets the stage for the way the feature deftly handles the overwhelming longing for home Eilis has.

You can thank Saoirse Ronan for the way Eilis and her numerous emotional conundrums pop off the screen. Never overtly showy, always enthralling in any given tonally varying circumstance, Ronan is definitely the key for why her character works as well as it does. Another part of the motion picture that can be credited to work done by Hornby and Ronan comes in the way it peels back the halcyon layers that cover Eilis's perceptions of the two environments she inhabits in the film. Whilst in America, she dreams of Ireland as a sanctuary from the daunting unfamiliarity she faces in Brooklyn, while a return trip to her native home has her realizing some of the more overbearing tendencies of the residents there and other notable flaws of her previous home.

The message here is an intriguingly mature one; no place is perfect, there is no home free of conflict and turmoil. It's sometimes the most seemingly innocuous things (the people you interact with namely) that can make a home a home. And that concept is what drives the films final act conflict, when Ellis must choose between staying home in Ireland or returning to Tony and Brooklyn. To be blunt, I wish more of the residents in Ireland got fleshed out in order to make this "Sophie's Choice" scenario more gripping. Everyone in Brooklyn (especially the extremely humorous ladies Ellis lives with in a boarding house) start out as a caricatures and proceed to blossom into more fully formed creations.

Despite having future Star Wars baddie Domhnall Gleeson as a man Eilis becomes infatuated with in her homeland, none of the other inhabitants of this region leave an impact, making her time spent returning to Ireland more devoid of entertainment compared to the rest of the picture. Brooklyn is far from devoid of flaws like these, but they thankfully don't detract from its undeniable charms (the scenes of Tony and Eilis on dates are irresistibly sweet). Is it a weighty masterpiece for the ages? No. Is it a well made, well acted slice of entertainment? Definitely. And sometimes, that's good enough for me.
Posted by Douglas Laman (NerdInTheBasement) at 2:12 PM