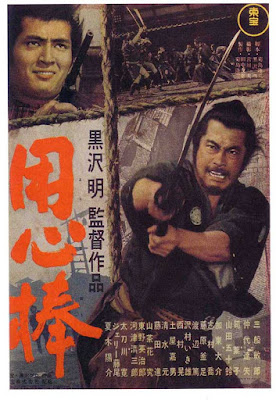 Where has this movie been all my life?

Honest to God, Yojimbo is such a clever, inventive, engaging and excellently produced motion picture I'm kicking myself for not watching it waaaaaayy sooner than I did. Better late than never, I suppose, especially when a great feature film like Yojimbo factors into the equation. Directed by Akira Kurosawa (he's also a writer of the film) and released in April 1961, this is the kind of movie that exemplifies why a simple premise can sometimes be the perfect thing to hinge an entire feature on.

What exactly is that premise? A ronin named Sanjuro (Toshiro Mifune) strolls into a small town populated by two quarreling crime syndicates. Wanting to help the innocent civilians caught between the gangsters, Sanjuro decides to rid the place of these ruffians. Now, while his expertise with a sword comes mightily in handy at certain points of the story, his primary weapon of choice is his cunning and wit, which he'll use to trick the dueling thugs into destroying each other. Like I said, it sounds like a plot far too simple to pin an entire motion picture on, but goddamn it, the entire enterprise absolutely fires on all cylinders.

A large share of my enjoyment in the film is in seeing the various ways Sanjuro outwits his foes, with the script making his various schemes legitimately crafty, which helps create an inescapable tension over wanting to see how he'll manage to get out of the various predicaments he finds himself in during the course of this story. Praise must also be delivered to the way the script develops its large roster of characters without making the feature feel overcrowded. Making a number of the enemies have familial ties to one and another is a big part of how this is accomplished, and seeing the dynamics of these various relatives play out amongst Sanjuros schemes makes for some mighty fine entertainment.

Although classified as a Jidaigeki feature on Wikipedia (that's a Japanese word for a period drama usually set in between the years 1603 to 1868), Yojimbo fits like a glove into the domain of western cinema. Sanjuro works as a more than suitable example of the age-old western archetype of the lone stranger strolling into an environment infested with conflict, to the town visually looking like it could have fit into any o'l John Wayne motion picture. Westerns, of course, originated in America, specifically in that o'l unpredictable Old West, so to see its tropes transported to the world of yesteryear Japan makes for some exciting storytelling choices, as many facets of conventional Japanese storytelling (namely, the concept of a ronin, otherwise known as a samurai without a master) seep their way into a traditionally American dominated narrative to excellent results.

Something else Yojimbo brings to the table in terms of genre related entities is the element of comedy, with several moments of darker tinged humor entering this story. Some of the most notable moments of this type of comedy come from the cowardly constable, particularly in Sanjuros final line to him. Writing down all my thoughts about this movie in this review, it seems kind of impossible that a feature which strives to touch on so many genre beats at once (it's a western set in decades past in Japan with darkly comic elements) would add up to such a cohesive experience. But it does. Does it ever. If you're like a me about a week ago and have not seen Yojimbo, do yourself a favor, drop what you're doing and watch it right away. It's an exceedingly impressively made motion picture that's relentless in dishing out captivating entertainment.
Posted by Douglas Laman (NerdInTheBasement) at 11:18 AM