An Inability To Be More Introspective Hinders Darkest Hour Greatly 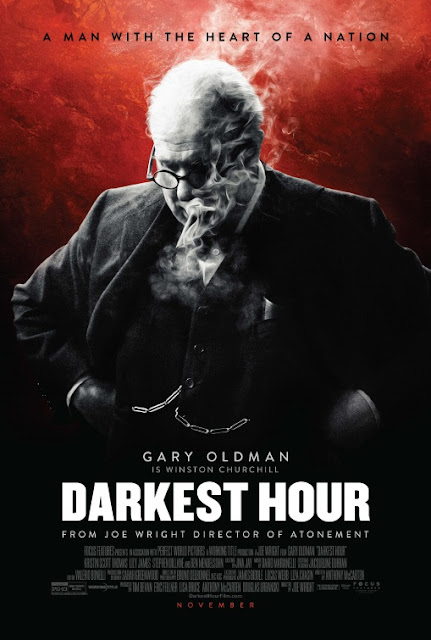 Winston Churchill certainly has been a popular figure in pop culture lately, hasn't he? The likes of Michael Gambon, Brian Cox and John Lithgow have all portrayed him in major roles on various film and television programs over the last two years. Add the Joe Wright-directed Darkest Hour as the newest piece of evidence that Winston Churchill is having a resurgence in his modern-day pop culture presence as Gary Oldman, with the aid of extensive makeup work, becomes the newest actor to portray this former British Prime Minister who played a crucial role in a number of events during World War II.


The portion of Churchill's life that Darkest Hour covers begins immediately after Neville Chamberlain (Ronald Pickup) is ousted from his position as British Prime Minister. Who will be selected as his replacement? Why, Winston Churchill (Gary Oldman) of course, a demanding stand-off-ish individual who is suddenly placed into one of the most powerful political positions on the planet. From there, we see Churchill's first month in this role as he deals with the Nazi regime and their steadily increasing power and control over Europe as well as how a man with such a brash personality is ever going to be able to properly work alongside other people in the name of a singular cause.

As I've said in the past, it's always best for biopics to minimize the amount of time in a real-life person's they cover for the sake of a concise narrative, covering too much time has a tendency to leave a story ungainly. It's wise for Darkest Hour to make that move from a storytelling perspective but unfortunately, Anthony McCarten's screenplay drops the ball in terms of making that story more insightful or entertaining to watch. Darkest Hour plays out in a predominately cookie-cutter way that feels all too reminiscent of past biopics and leans heavily on predictable character arcs (when those arcs even exist!).

Here's the oddest thing about this movie; it's biggest failing, for me anyway, is in how it doesn't really make Winston Churchill a person. Past biopics like Lincoln or Selma took massively well-known historical figures like Abraham Lincoln and Martin Luther King Jr. and imbued these individuals and the events they were partaking in with a discernable sense of reality. Figures who had been reduced to legend in history textbooks became people again right up there on the silver screen. Those two aforementioned biopics were all about looking at the larger context important historical figures lived in while Darkest Hour is all about how World War II seemingly revolved around Churchill who did so much kick-ass stuff in his first month as Prime Minister.

For Darkest Hour, Winston Churchill's personality basically begins and ends with him being grumpy but also a bodacious dude to the core. The supporting cast is around to either support him fully or be antagonistic towards him so they can be either humbled or disgraced by Churchill's coolness in the climax. Churchill's foes here serve the same purpose as the cranky Dean in a 1980's college comedy, they're the squares to our hip as can be protagonist.  It's a weird move to make the characters such thinly sketched caricatures since it leads Darkest Hour to feel like such a shallow movie as a whole. Those looking for new interpretations of Churchill and his work as British Prime Minister will have to look elsewhere, this one's content to just be a basic historical reenactment on a story level.

Joe Wright's bombastic visual tendencies do help keep Darkest Hour watchable at least as he deviates from making this a stuffy period piece by incorporating a number of grandly staged and lit shots that certainly give this film it's own unique aesthetic. Also helping the project is Gary Oldman as Winston Churchill, who matches the over-the-top tendencies of the screenplay with a bravura performance as Churchill that has him belting out a number of cantankerous retorts at a high level of volume. This really doesn't strike me as a thoughtfully realized portrait of Churchill that unearths new layers of humanity of this individual, but thankfully, as anyone who saw The Fifth Element can attest, Gary Oldman in stylized form is a lot of fun and he does some entertaining work here to compensate for the lack of substance in the writing of his character. Oldman is working alongside some make-up work that's, aside from some odd shots where his face has this Uncanny Valley look to it, well-realized. The only one in the supporting cast that leaves an impression is Ben Mendelsohn and he doesn't get enough screentime to improve the movie substantially.

After that dreadful Peter Pan movie Joe Wright did two years ago, Darkest Hour is certainly a step up in quality for the filmmaker even if this biopic doesn't come close to Wright's best works, Atonement and Hanna, and even on it's own merits, it's merely a so-so feature film that won't creep into my mind all that often until Gary Oldman inevitably wins an Oscar for this movie in early March. Joe Wright's grandiloquent filming methods and Gary Oldman doing enjoyable work in the lead role can only do so much to alleviate how unengaging the one-note approach Darkest Hour takes to its characters & story becomes over the course of two hours.
Posted by Douglas Laman (NerdInTheBasement) at 9:59 AM