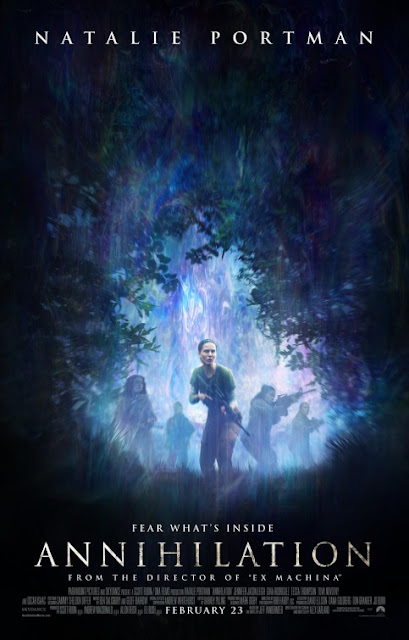 Alex Garland already had a solid foothold as a noteworthy name in American science-fiction cinema with his work as a writer on projects like Sunshine and Dredd, but with 2015's Ex Machina, he made a high-quality leap into the world of directing. His follow-up directorial effort to that feature is Annihilation, a feature film adaptation of a novel by Jeff VanderMeer, that allows Garland to expand his scope as a filmmaker without losing the contemplative nature of Ex Machina. Interestingly, despite having a larger canvas to work with this time, as well as a major studio footing the bill, Garland has written a film that engages in more unorthodox narrative techniques than Ex Machina, believe it or not.


The lead character of Annihilation is biologist/professor Lena (Natalie Portman), whose reunion with her thought-to-be-deceased husband, Kane (Oscar Isaac), turns sour real quick once it becomes apparent that Kane has contacted some sort of deadly disease from his last military assignment that took him into The Shimmer. What is The Shimmer? It's a rapidly growing area covering a large amount of American swampland that's proving to be a mystery to the government officials trying to figure out where it came from or what it's doing here. Any people, sans Kane, sent into The Shimmer never come back, leaving the place a total enigma to all human beings, including Dr. Ventress (Jennifer Jason Leigh).

Hoping to get some answers as to what happened to her husband, Lena decides to join an expedition that's been put together to explore The Shimmer. Her crew consists of five women, including Ventress, Anya Thorensen (Gina Rodriguez), Cass Sheppard (Tuva Novotny) and Josie Radek (Tessa Thompson). They decide to embark into The Shimmer, a voyage that immediately carries with it an ominous mood evocative of Andrei Tarkovsky's Stalker, another motion picture about following how a group of human beings react whilst trekking into a mysterious quarantined zone that messes with their minds and bodies in equal measures.

That sort of mood means the atmosphere of Annihilation is heavy on tension from the get-go and that allows Alex Garland's ability as both a director and writer (he's also responsible for writing the screenplay here) to create riveting suspenseful sequences to get a big work-out here. A mid-movie scene that leans heavily on Gina Rodriguez's character is especially potent thanks to the way it relies not just on strong editing & camerawork, but also easily relatable characters whose motivations are clearly established and understandable. A compelling atmosphere and well-rendered characters go hand-in-hand in Annihilation and the result is that the experience of watching these women go deeper into The Shimmer is frequently edge-of-your-seat thrilling.

Sometimes balancing the thrills with more introspective tendencies of the script proves to be a challenge for the movie, specifically in a supporting character that's obviously just cannon fodder, which doesn't jive with the character-centric tendencies of the rest of the story. Otherwise though, Annihilation strikes that balance pretty darn well and when it comes to creating chills n' thrills for the viewer, the film is particularly striking on a visual level. The way Annihilation choices to depict landscapes and certain environments inside The Shimmer is by taking a cue from Bryan Fuller's TV show Hannibal and make the grotesque & dangerous beautiful looking. Terrifying sights are frequently covered in gorgeous flowers or bright colors, making this movies vision of what the characters encounter in The Shimmer as unique as it is gorgeous.

Playing the various characters who are sent into The Shimmer is a whos-who of talented actors who do uniformly strong work. It's so cool how Natalie Portman has recently returned to acting full-time, especially since she's decided to fill her recent filmography credits with challenging roles like Linda. Jennifer Jason Leigh and Tessa Thompson do the sort of superb work that should be no surprise to anyone's who's seen any of their other acting credits in the last few years while the big revelation for me was Gina Rodriguez. Having never seen her TV show Jane The Virgin, I've had zero exposure to her beyond her supporting role in Deepwater Horizon, but she's fantastic here in handling her character's arc inside The Shimmer.

Being a science-fiction drama heavy on atmosphere and also non-linear storytelling (in addition to the main storyline, the viewer is frequently jumping between sequences set before and after Linda's experiences in The Shimmer), it should be no surprise the whole story culminates in an abstract sequence that's incredibly distinctive on a visual level. Perhaps it'll prove too impenetrable for some viewers, but I was certainly engrossed by this finale, especially once the sound-work and the score (the latter element composed by Ben Salisbury and Geoff Barrow) merge and reach intentionally overwhelming volume levels. The immense audio mixed together with the unorthodox imagery transpiring on-screen means you get a discombobulating sequence that puts you right into the head-space of Linda as she comes to terms with what really is inside The Shimmer. It's a bold way to end Annihilation but also a fitting one, an unconventional ending for an unconventional but also supremely engaging movie.
Posted by Douglas Laman (NerdInTheBasement) at 11:03 AM