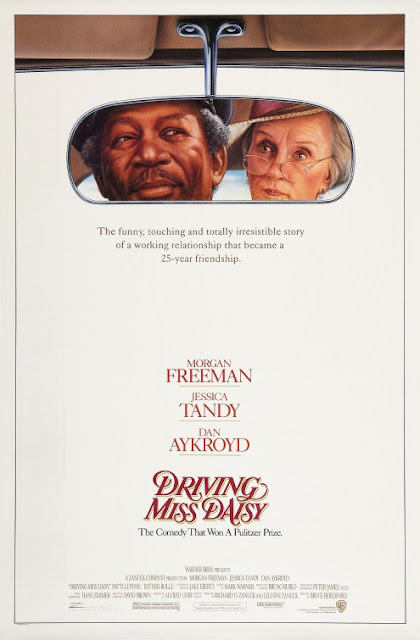 Winning the Best Picture Oscar is typically akin to winning American Idol; such an ostensibly prestigious victory that should result in an avalanche of good news usually invites more scorn than admiration. Though plenty of exceptions like Casablanca, No Country For Old Men and Schindler's List exist, a large number of Best Picture winners are only known by the general public in the years afterward for beating out a movie they vastly preferred for the victory. That strikes me as unfair to hold against a movie since it's the voters for the Academy Award that designate a certain movie should win Best Picture, not the movie itself.


So it is with Driving Miss Daisy, which won Best Picture nearly three decades to much controversy, though this was the kind of controversy that was actually quite understandable since it stemmed from the Academy shutting out Do The Right Thing (one of the best movies of the entire 1980's, let alone just 1989) from even a Best Picture nomination in favor of what was widely seen as a less challenging take on American race relations. Comparisons between the two can wait for another day, however, as today is the day Driving Miss Daisy gets its own review from yours truly, though there's, interestingly, not a whole lot to talk about in regards to the feature itself.

Based upon an acclaimed play written by Alfred Uhry, Driving Miss Daisy chronicles the friendship formed between wealthy socialite Daisy Werthan (Jessica Tandy) and her driver, Hoke Colburn (Morgan Freeman). We get to watch the pair's interactions throughout various decades, as they start out having a contentious relationship stemming from Daisy not wanting to cede any of her independence, especially to a person of color. As the years go by, the two do develop more of a friendship, albeit one frequently challenged by Daisy's cantankerous tendencies, and Daisy begins to see Hoke as more of an actual human being.

Driving Miss Daisy is the kind of motion picture that strikes me as agreeable but also a bit on the slight side. It's all too easy to predict the ebb and flow of these two's relationship and there's little attempt to incorporate anything more thoughtful as subtext to their friendship. A scene showing Hoke being forced to sit in a car while Daisy takes in Martin Luther King Jr. speech about how the apathy of white people rather than just overt racism is one of the greatest obstacles to racial equality is the most interesting moment of the entire project because it's one of only a few parts of the film that feel like they have something more momentous to say about race relations in America in the 20th century.

Of course, not every movie needs to shoot for the stars in terms of thematic depth, just keeping things contained to simple dialogue-heavy sequences can totally work if the dialogue and performances are working like gangbusters. To be fair, the best asset of Driving Miss Daisy is it's two lead performances, Jessica Tandy's always crotchety performance results in some fun line deliveries while Morgan Freeman (how odd it is to see him using a voice separate from that deep gravitas-infused voice we all know and love) carries real humanity as Hoke Colburn that helps compensate for how Alfred Uhry's script (Uhry adapting this movie to the silver screen from his own play) has a tendency to leave Colburn as more of a stereotype than a fully-fleshed out human being.

Uhry's writing is more of an issue for this more streamlined production as the story and dialogue aren't quite engaging enough to compensate for a lack of substantive themes while there are some clunky moments involving transitions meant to indicate that a long period of time has passed. His work for this specific movie is overall competent, and both the writing and performances do hit their peak in terms of quality in an ending that does work at tugging on your heartstrings, but I couldn't shake the feeling that Uhry could have done so much more with this premise even as just a small-scale character piece driven by solely dialogue. If Driving Miss Daisy was itself a car ride, it'd be one that chugs along amiably but also one that never really becomes all too memorable.
Posted by Douglas Laman (NerdInTheBasement) at 10:11 AM