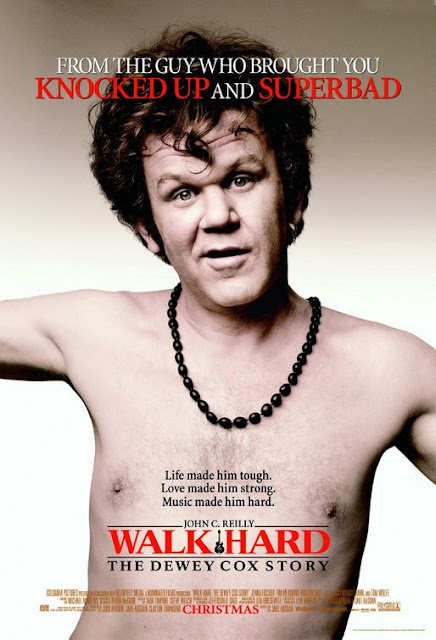 In 2007, Judd Apatow seemed to have garnered the Midas Touch in that every comedic project he touched as a producer was generating massive box office. Most notably, Knocked Up and Superbad had been back-to-back box office hits in the summer of 2007 that ushered in a new age of American comedy and he would follow those two up with more box office hits like Step Brothers and Pineapple Express the subsequent year. But even in a year as golden as 2007, not everything can be a hit and Walk Hard: The Dewey Cox Story ended up being the Judd Apatow produced comedy to be a box office dud despite opening just a few months after Superbad.


Whereas Apatow's two other 2007 features were all about emulating realism, Walk Hard is a movie that's silly right down to its core. This is a movie with a style of humor more akin to David Wain's heightened Wet Hot American Summer than anything else and such over-the-top gags are in the service of poking fun at the recurring traits of typically somber music biopics. The resulting project has a different tone and style than the other two Judd Apatow produced comedies of 2007 for sure but it also gives Walk Hard it's own unique identity that's incredibly hysterical to watch and also allows for John C. Reilly to excel as the titular lead character.

Reilly plays musician Dewey Cox throughout his entire life, from his days as a 14-year-old performing controversial music to his local townsfolk to his days as an adult chart-topping musician to even his days as an elderly man. All the while, Reilly is incredibly funny by nature of not playing the role in an inherently comedic fashion. Even when he's doing ridiculous things like ripping sinks out of the walls, Reilly is constantly playing this role in a manner reminiscent of how dramatic performers portray real-life figures in actual biopic movies. Juxtaposing a committed performance like Reilly's against a barrage of ludicrous jokes only makes Walk Hard all the more humorous than it already is. Plus, Reilly can actually sing, which results in another form of entertaining juxtaposition in having Reilly belt out silly lyrics with actually solid vocals.

And good gravy is this a funny motion picture. Under the direction of director Jake Kasdan (a guy who just directed a little-known 2017 movie called Jumanji: Welcome To The Jungle), Walk Hard: The Dewey Cox Story makes time for plenty of jokes that both parody specific aspects of conventional dramatic biopics and also stand-alone gags that manage to be funny on their very own merits. For the former type of jokes, the recurring bit of Dewey Cox getting inspiration for song titles from various pieces of incidental dialogue is genius and even feels like it's understating the often bizarre way such a trope factors into real biopics (like how Operation Dynamo is shown to have gotten its name from a fan in Darkest Hour).

As for jokes that would be funny in any context, look no further than things like Tim Meadows (whose absolutely hysterical in this movie, what a funny guy) constantly telling Dewey Cox that he shouldn't participate in various drugs over numerous decades or a nurse saying that a hysterical Dewey Cox needs both more blankets AND pillows (a doctor solemnly responding "I'm afraid you're right" only makes it all the more hilarious). Walk Hard: The Dewey Cox Story is just throwing out these kinds of high-wire bizarre gags at the viewer in a rapid-fire fashion, ensuring that it crams plenty of memorable gags into its short runtime.

The screenplay, penned by both Kasdan and Judd Apatow himself, gets a lot of it's best jokes from the variety of supporting players Dewey Cox comes into contact with over the years. Raymond J. Barry as Dewey Cox's disapproving Dad ("THE WRONG KID DIED!!") may be the best of the numerous supporting performances found here, though a cameo by Paul Rudd as John Lennon struck me as especially funny simply because of the utterly outlandish voice Rudd uses for Lennon. With all of these humorous performances running rampant, it's no wonder Walk Hard: The Dewey Cox Story ends up being such a gleefully hilarious and well-crafted take on the music biopic genre.
Posted by Douglas Laman (NerdInTheBasement) at 2:02 PM