The 15:17 To Paris Goes Off The Rails In Thoroughly Lifeless Ways 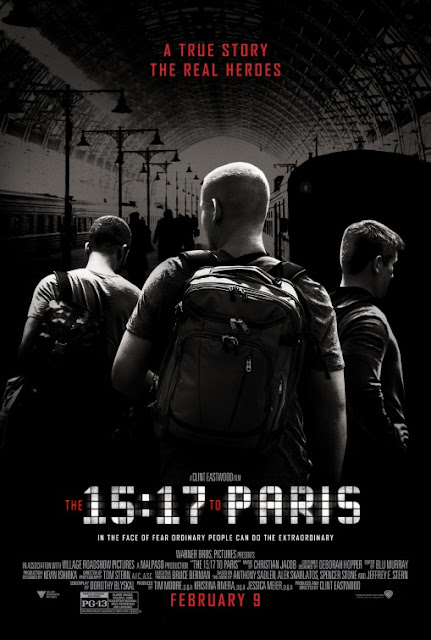 On August 21, 2015, an extraordinary event happened on a train departing from Amsterdam and heading to Paris, France. As a man got his gun ready and planned to commit an act of terrorism, three ordinary Americans, Anthony Sadler, Alek Skarlatos and Spencer Stone leaped into action and took down the man before he could actually execute his plan.  The trio subsequently became heavily publicized heroes with their actions resulting in a book chronicling that fateful day as well as a film adaptation of that fateful day entitled The 15:17 To Paris starring the three men as themselves. While the actions of this trio were incredibly noble and admirable, tragically, the film adaptation of those actions is all around dismal.


Clint Eastwood is the director in charge of this project and like his last film, Sully, he's adapting real-life events revolving around normal human beings acting extraordinarily under extraordinary circumstances. Like Sully though, the real-life event it depicts lasted for such a small amount of time that it can only fill out a scene in a movie rather than a movie as a whole. Sully, though only OK in my eyes, at least tried to be all about Sully coming to terms with the fame he was facing in the wake of his newfound fame after saving so many lives, a potentially dramatically compelling situation. The 15:17 To Paris doesn't even have something as conceptually interesting to fill up the running time not devoted to our three lead characters doing train-based heroics.

Much of the film is devoted to following the three lead characters prior to them becoming worldwide heroes, with the script by Dorothy Blyskal starting out in their childhood, where we get to see the three kids starting their friendship while enduring hardships like deluges of bad dialogue. Aside from the amusing sight of a horde of comedic character actors showing up as the teachers at their middle school (Tony "Buster Bluth" Hale is a tired gym teacher while Jaleel "Urkel" White plays a history teacher) as well as the bizarre inclusion of a Letters From Iwo Jima poster on 12-year-old Spencer's bedroom wall, much of this early part of the story is an anemic bore low on actually interesting character interactions.

Sadly, that's probably the highest level of quality the movie has to offer as things only get worse as the characters grow up. The focus soon turns almost exclusively to Spencer as his two buddies only show up when he needs someone to exchange expository dialogue with. You'd think the movie would spend time prior to the big train incident trying to establish the trio's friendship, but instead, we just get to watch Spencer go through a barrage of thoroughly anemic military academy training (we even get a training montage set to the Imagine Dragons song Believer, which is a tune I can't seem to escape ever). These sequences don't even make you warm up to Spencer all that much since scenes like Spencer grabbing a pen to attack a potential shooter at his academy don't do all that much to make the viewer warm up to this film's depiction of this real-life person.

But the extended section of the story detailing the main trio's vacation across Europe made me yearn for the generic military training portions of the story. Taking a cue from how Adam Sandler just filmed himself and his buddies chilling out in the Grown Ups movies, The 15:17 To Paris devotes large amounts of its story to just chronicling Spencer, Alek, and Anthony traveling across Europe and seeing major tourist attractions in the likes of Germany, Amsterdam and Italy. The various European locales look pretty, sure, but this gets tedious fast. Watching The 15:17 To Paris burning off screentime to the sight of Spencer and Anthony making horse puns after seeing a horse statue in Italy is like the polar opposite of how Before Midnight made the sight of Ethan Hawke and Julie Delpy trading witticisms in Europe an incredibly riveting sight. The latter movie made the potentially mundane exceptionally thoughtful & captivating while the former movie most certainly did not.

The climactic recreation of that fateful day on the train has more energy to it than the rest of the movie but even this sequence has no real creativity or imagination in how it's edited, filmed or anything like that. This scene intended to be pulse-pounding and intense is outright lazy in its filmmaking so you can only imagine just how dreadfully boring the rest of the movie focused mostly on the lead trio just enjoying food and women in Amsterdam and Italy is. If you thought modern-day Clint Eastwood movies couldn't get worse than Jersey Boys, I've got sad news for you because Eastwood may have just delivered one of his all-time worst duds in the painfully monotonous feature The 15:17 To Paris.
Posted by Douglas Laman (NerdInTheBasement) at 9:05 AM