Bill Morrison Makes A Captivating Portrait of The Past With Dawson City: Frozen Time 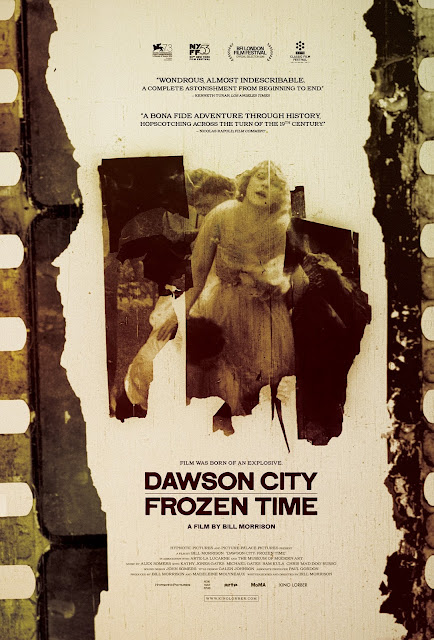 As a lover of film, the lack of care that was given by early 20th century individuals into preserving many of the earliest pieces of cinema is utterly heartbreaking. A number of motion pictures that were immensely popular in their day and age have been lost to the ravages of time thanks to the carelessness of the people handling them (the fact that such films were exhibited on easily flammable film didn't help matters of course). So much of the earliest history of cinema has been lost, a devastating occurrence that Bill Morrison's documentary Dawson City: Frozen Time chronicles by taking the viewer on an extensive voyage to Canada in the last few years of the 19th century.

It was in those years that the Klondike Gold Rush occurred, sending numerous individuals to the Northern territory of Canada in the hopes of striking it rich. After making it through the treacherous terrain of this domain, these miners needed a place to stay and thus, the Yukon, Canada town of Dawson City was formed. Basically, from the moment the town was established it faced extensive hardship, including annual fires and a quickly dwindling population resulting from miners eventually deciding to search for gold elsewhere. Despite all of the problems, Dawson City endured and it managed to keep a consistent population in place, a population that needed entertainment to help pass the time.

Thus, a number of local movie theaters were established to provide such entertainment that the masses frequently would enjoy greatly. Given that this Canadian town was located in the uppermost parts of the North American continent, they were usually the very last receive reels of movies, with sometimes multiple years separating the time of a movies initial release and when it would be shown in Dawson City. Because of the expenses of shipping these reels back to American studios, the movies of this era would stay behind in Dawson City and end up being destroyed, either by intentional malice or by random fires.

This expansive tale of Dawson City being established and it's first few decades of existence provides exceptionally engaging fodder for Bill Morrison (who serves as the writer and director here) to orient a film around. Ingeniously, Morrison has chosen to tell this story in a unique manner fitting of its subject matter. Instead of going for the typical structure of a documentary that relies heavily on interview segments that can provide context for historical images and footage, the vast majority of Dawson City: Frozen Time is entirely reliant on visuals like on-screen text and historical footage, dialogue is kept to a bare minimum. This makes it akin to the silent movies that were so popular in the time period it's chronicling.

It's easy to see why such a choice was seen as feasible when looking at the imagery and footage at their disposal. Striking photography taken during the Klondike Gold Rush during the first few scenes of the motion picture establish what kind of superb visuals this project will be heavily utilizing. Throughout the movie, accompanying footage to historical events typically comes in the form of actual silent movies that have been recovered from underground locations in Dawson City. What we're watching when these vintage films flash by on-screen is nothing short of a miracle thanks to their incidental preservation (it is only because of low temperatures that the films survived in the ground so long). Getting the chance to watch bits and pieces of such movies would be extraordinary on their own, let alone when they're just one part of a larger compelling documentary.

All of these various pieces of period-era footage and images are in service of telling a story of a town rising up from nothing and then proceeding to endure despite endless hardships, a saga that's thoroughly engrossing to watch unfold. Dawson City: Frozen Time makes the very sight of watching decades gradually pass by a transfixing experience thanks to the concise nature of the Morrison's script that strikes an impressive balance between making sure the viewer has enough historical context for how and why certain events are happening while also ensuring that the pacing of the overall movie isn't hindered by extraneous details. All of this is accompanied by a haunting score from Alex Somers that helps reinforce how well Dawson City: Frozen Time uses non-verbal techniques to make a tremendous movie all about getting to recognize the value of remembering and preserving elements of the past whether they be vintage silent movies or one Canadian town managing to endure.
Posted by Douglas Laman (NerdInTheBasement) at 11:56 AM