A Wistful Take On Life Is Beautifully Realized In Lucky 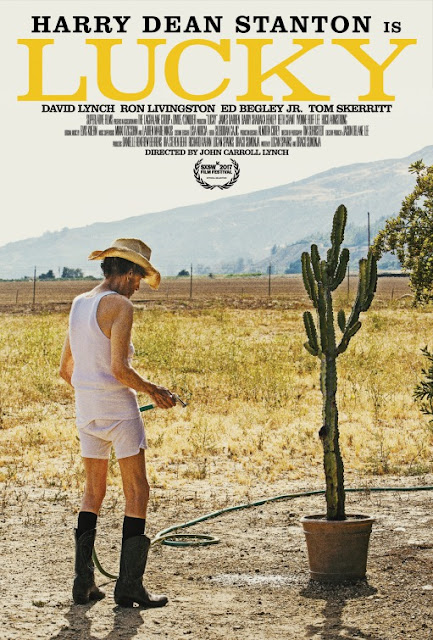 Some of my favorite movies ever are simply laid-back movies following a normal human being going about their lives over the course of a few days. When you do those type of films right, you get something just so riveting, a cinematic replication of either the world we live in everyday or a glimpse into an authentic portrait of a world we're unfamiliar with. Want a great recent example of this strain of cinema done well? Look at Lucky, a small-scale dialogue-driven drama that serves as both a star vehicle for the late great character actor Harry Dean Stanton as well as the directorial debut for John Carroll Lynch.


The film itself is titled after the lead character played by Harry Dean Stanton, an elderly man who lives out his days alone in a small house in a similar tiny town, the kind of town where everyone know everybody's name. In our first few scenes with Lucky, we get to see the routine he does through each day as he wakes up, does his exercises, goes to a local diner, walks around the town, watches game shows in his house and then concludes his day with a drink at a local tavern where he frequently runs into his best friend Howard (David Lynch). The life he lives day in and day out is a simple one, sure, but it's a kind of life that suits a guy like Lucky just fine.

But that mundane routine is thrown out of whack when Lucky, out of the blue, falls to the ground unconscious for a short period of time. A trip to the doctor right afterwards is inconclusive in deciphering what exactly made Lucky act this way. Lucky now goes about the next few days grappling with the fact that his mortality has been suddenly reinforced in an overt manner. That's all the plot screenwriters Logan Sparks and Drago Sumonja give this motion picture and it's all they need. Just following Lucky around as he engages in a number of conversations with townsfolk both new and familiar proves to be an incredibly rich experience. "Less is more" they say and that's certainly true of the plot mechanics of Lucky.

You know what really helps sell Lucky though? The sets and the actors. In regards to the former element, the locations Lucky visits in his daily business feel like real buildings with all sorts of imperfections like peeling paint. The home of our lead character is adorned with furniture and trinkets that feel like they could actually be found in a residency belonging to a sole individual in Lucky's age range. Naturalism is what Lucky as a story is clearly going for and the movies able to visually compliment that through the various environments Lucky travels to that feel like they came straight out of bona fide small-town life.

As for the actors, well, the cast is stacked with some veteran character actors doing some entertaining work in creating easily identifiable portraits of everyday people that fits right in with the realistic angle the project is chasing. Harry Dean Stanton has been a prominent character actor for decades now for good reason and he gets a chance to show off his talents in his lead performance here. Cantankerous elderly men are a common fixture in storytelling but Stanton is able to give Lucky his own unique sense of crotchety charm that's able to separate him from the pack. Stanton's delivery of the various peevish retorts his character fires off ("The only thing worse than awkward silence is small talk") is incredibly funny while the more somber meditative moments with his character have a commanding wistful quality to them that Stanton is able to convey sometimes without uttering a single word.

Props also to David Lynch, whose casting here may seem like simply stunt casting given the numerous collaborations he and Stanton have done over the years, but Lynch is doing commendable work here. A speech his character gives about how important pet tortoise was to him is given real emotional heft through Lynch's tortured delivery. Howard's far from the only character here to be given a seemingly wacky or stereotypical personality trait only to be given real depth in time, numerous folks in Lucky's life like a convenience store clerk, a lawyer and a fellow war veteran also get to gradually unexpected layers as time wears on.

Lucky, as a movie, suggests that to make the time to get to know people better is one of the best things we can do as people. When we actually make the effort to discover who our fellow human beings truly are, we can understand why they act like they do and form a deeper bond with them. This idea gets exemplified early on in the story in one of the movies best scenes, where an employee at the local diner visits Lucky at his shack to check on how he's doing. The two promptly watch concert footage of Liberace and smoke some weed on Lucky's couch. Before this employee departs, Lucky, who has shown to be mostly just a choleric fellow to the other townspeople, asks her if he can tell her something. She responds that he can.

"I'm scared" he says, Harry Dean Stanton's haunting delivery exposing a heretofore unknown level of vulnerability to this woman and the viewer.

"I know" the lady replies. It's a moving dialogue exchange that gets a lot of impact out of minimal words. In just four words, one gets the emotional wallop of seeing a new more susceptible side of Lucky while also getting reassurance that he doesn't have to go through this experience alone, someone else knows and understands his pain. John Carroll Lynch's impressive directorial debut Lucky is full of those kind of beautiful moments that impart a wistful yet hope attitude within a realistic & casual package. Next time someone wonders why these kind of movies following the everyday lives of normal people are some of my favorite kind of films, I'll point to Lucky as an example of why this subgenre resonates so deeply with me.
Posted by Douglas Laman (NerdInTheBasement) at 11:15 AM