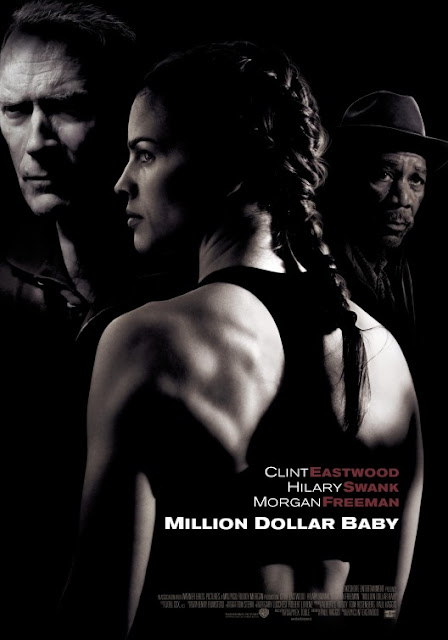 Ever since Rocky delivered knockout box officer numbers over forty years ago, the boxing drama subgenre has been a prominent fixture of cinema all over the world. It's one that's reliable both in terms of drawing a crowd for studio and plucking at the heartstring of audiences. Plenty of duds exist in this cinematic niche (remember Southpaw or Grudge Match?), but when done well, like with Creed, the creative apex of this entire subgenre, there's really nothing quite like it. Clint Eastwood's 2004 directorial effort Million Dollar Baby is no Creed, but few movies are. Positive marks are in order for a movie like this one that rides on traditional storytelling to mask how crafty it is at knowing just when to strategically get the viewer wrapped up in a blanket made of emotions.

Frankie Dunn is a 21st-century character played by Clint Eastwood, in that he's crotchety, crusty, mean-spirited, but doggone it, there's a heart under there! Dunn is also a boxing manager whose efforts in that career field have hit a stumbling block when his client abandoned him while his personal life is a mess thanks to the estranged relationship he has with his daughter. Still, the dude's got a reputation as a legendary local figure in box and that's why Maggie Fitzgerald (Hillary Swank) left her small-town life to drive down to Los Angeles to try and train as a boxer under the direction of Dunn. Dunn isn't enthused about training a (*GASP*) girl and turns down Maggie frequently.

But Maggie has perseverance, to quote Rocky Balboa, she's "like a woodpecker" in how she persistently keeps asking for Dunn's assistance. Finally, Dunn caves in and agrees to just give her some pointers and that's it. From there, the two become inseparable as Maggie starts to become a rising star in the world of boxing, with this one taking a deviation from typical boxing dramas in plot details by having the third act revolve around not Maggie engaging in some kind of high-level boxing match but rather her stay in a hospital after a traumatic physical injury. The "fight" the character goes through in Million Dollar Baby is smaller-in-scale and doesn't take place in a boxing ring, if you really think about it....

Snarky joke aside, my favorite aspect of Million Dollar Baby is how it's very much a character-oriented piece where the boxing matches take a backseat to the journies of Frankie Dunn and Maggie Fitzgerald. Both are people dealing with the loss of loved ones near and dear to their heart, with Frankie having an estranged daughter (love how they handle that aspect of his character by not going in-depth onto what made their relationship fracture) while Maggie is not only missing her father, but also has a mom and siblings who look down on her for her decision to pursue a boxing career. Individually, they're struggling to feel like whole people and when they manage to come together, they find something resembling a whole inside themselves again.

The script by Paul Haggis has the duo gradually deepening their relationship by way of a number of smaller-scale subtle moments & scenes (most notably a trip to roadside diner) that help the two's surrogate father/daughter bond feel like it's truly earned. That, of course, makes the third act entirely revolving around Maggie suffering a severe injury on her spine all the more tragic to watch, as Maggie is confined to a hospital bed and Frankie has to cope with the prospect of possibly losing another daughter. Our two lead performances for these characters are incredibly well-realized, especially Hillary Swank, she's so adept at making the endurance of her character shine through in moments both prosperous and disastrous.

Morgan Freeman lends both an endearing supporting performance and recurring narration to the piece, and though the narration sometimes feels like an extraneous heavy-handed presence, Freeman and that iconic voice of his are perfect for giving some of the most important lines of Million Dollar Baby essential gravitas. The serviceable but not all that creative cinematography and editing are less memorable than the writing of Million Dollar Baby, but thankfully, they don't detract from how much the movies able to pack an emotional punch (sorry, the pun was right there!) thanks to a strong screenplay and an impressive lead performance from Hillary Swank. That boxing drama subgenre really can produce some memorable movies can't it?
Posted by Douglas Laman (NerdInTheBasement) at 10:34 AM