A Fun Horror Movie Homage Awaits In The Void 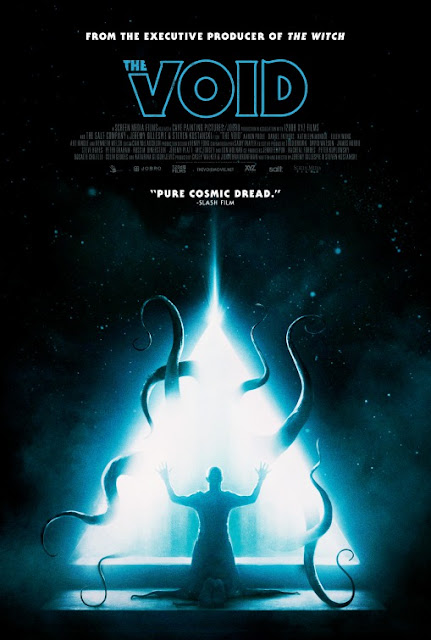 It's good for an artist to know where the strengths in their work are. You need to be cognizant of the flaws too, obviously, but once you recognize what traits you're really excelling at, you can polish those specific traits into tip-top shape and try to orient yourself in the direction of those areas where you manage to work so well in. For The Void, a Canadian indie horror film financed through an IndieGoGo page, it knows right off the bat that it's greatest strengths lie in it's macabre creature designs and the practical effects used to bring those designs to life. Thus, those are the two facets of it's production that receive the greatest emphasis and the feature is all the better for it.

Daniel Carter (Aaron Poole) is a police officer expecting another routine quiet evening trying to apprehend speeders on the road, but then he runs into James (Evan Stern), a drug addict with injuries that neccesitate him being raced to the local hospital that Carter's ex-wife, Allison Fraser (Kathleen Munroe), works at. While there, it turns out James has brought more than just himself into the hospital as some kind of an alien organism begins to take over people's bodies and slaughtering everything in sight. Vincent (Daniel Fathers), a man whose had experience fighting these beings, has followed James to the hospital and now Daniel is gonna need his help if he and the other individuals at the hospital want to survivie the night.

The creature mayhem kicks into overdrive early on in the story and from there, The Void delivers steady servings of weird looking monsters commiting repulsive acts of violence, all done under the guise of paying heavy homages to 1980's horror movies. In case you couldn't get that that decade of horror is what the feature is looking to be a tribute to, things get pretty explict in how the aliens taking over human bodies and contorting them to their desires feels reminscent of John Carpenter's The Thing while the actual bad guy, both in vocal candence and his heavy usage of other-wordlly mysticism, seemed evocative of Pinhead from Hellraiser.

If that all sounds like a recipe for a weird hodgepodge of 1980's horror movie fan service, thankfully, that's not what The Void turns into. Using that era of filmmaking as a guidepost, it creates it's own unique bits of monster mayhem brought to life with budget-concious craftiness (that's another trait it shares with horror movies of the 1980's!) rather than just being a fan-film referencing horror movie elements you recognize. Things become especially entertaining in the third act set in a newly discovered basement portion of the hospital, which just goes all out in the gross disturbing body horror we've only been seeing in bits and pieces up to that point.

The storylines underpinning the endeavor is pretty basic stuff for sure, though thankfully it's an inoffensive form of basic. A recurirng theme of grappling with loss (both Daniel and our villain are motivated by the tragic death of their children) is probably the most distracting narrative flaw since, though it provides decent motivation for the antognist, it ends up feeling undercooked mainly due to how they end up resolving Daniel's sense of loss. On a writing level, certain characters also feel like uninteresting one-note archetypes that only exist to be victims for the monsters, you'd think the supporting cast could at least be entertaingly kooky one-note archetypes before they inevitably end up getting brutally killed.

Even with those issues with the script in mind though, kudos to The Void for keeping things short, sweet and simple. This film doesn't even reach 90 minutes with credits and that's very much a good facet of it's production. Instead of filling the plot with all sorts of boring padding, one just gets a straightforward monster movie that gets right into the monster carnage super early on and rarely lets up after that. Even if The Void is just a way to show off some nifty practical effects and pay homage to 80's horror movies that directors Steven Kostanski and Jeremy Gillespie, I don't mind in the least since the result is a fun horror monster movie that knows just where it can excel the most at.
Posted by Douglas Laman (NerdInTheBasement) at 8:21 AM