The Killing of a Sacred Deer Slaughters Normalcy With It's Depraved Farcical Storytelling. That's A Compliment. 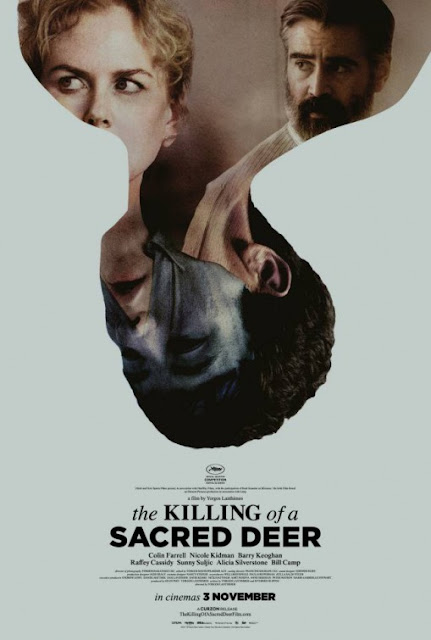 If you saw 2016's excellent dark comedy The Lobster, then you're fully aware how much writer/director Yorgos Lanthimos loves to weave tales heavy on weirdness and people committing ever-escalating acts of depravity in the service of an extended metaphor. He keeps that spirit very much alive for his newest movie The Killing of a Sacred Deer, which is akin to The Lobster as well as last year's The Square in terms of being a dark comedy that keeps daring the audience to look away from the various hideous acts occuring on-screen. So utterly unconventional is The Killing of a Sacred Deer that I imagine writers Yorgo Lanthimos and Efthymis Filippou started their first writing session with this simple statement:

What exactly is the premise of this oddball motion picture? Well, it all comes down to Steven Murphy (Colin Farrell), a surgeon who is constantly being followed around by this teenage boy named Martin (Barry Keoghan). Martin is a peculiar lad, but his behavior gradually becomes more and more perturbed, culminating in Steven going to Martin's house for dinner and that ends in all kinds of awkwardness. After that, Steven's child, Bob (Sunny Suljic), becomes paralyzed from the waist down and won't eat anything. What a strange turn of events. Turns out, Martin might have something to do with this sudden medical emergency as part of an elaborate plan for revenge that will soon spread to Bob's wife, Anna (Nicole Kidman), as well as his daughter Kim (Raffey Cassidy).

From there, well, far be it from me to spoil the specifics of what sort of madness awaits Steven in how he tries to get a handle on this situation. I will say that the unfolding mayhem is so crazed and peppered with so much dark humor that I was surprised to read, after watching the movie, to discover that a surprisingly large number of people seem to be under the impression that this is meant to be a straightforward drama instead of a farce. I'm a fellow who misses a lot of subtle and even not so subtle themes or elements of movies and even I'm surprised that the fact that this is meant to be a farcical movie seems to have gone over many people's heads.

As a conventional drama, The Killing of a Sacred Deer wouldn't work, but it's clearly not trying to be that. As said before, it's a straight-up farce that allows Lanthimos and Filippou to explore what happens when seemingly normal people (Steven and Anna are explicitly shown to be living the seemingly perfect life of a financially well-off nuclear family), are tossed into the middle of a maelstrom that keeps getting more and more deranged as the days go by. It's also meant to be a showcase for talented dramatic actors to get their freaky on as the likes of Colin Farrell (reteaming with Lanthimos after he delivered some of his best work as an actor in The Lobster) and Nicole Kidman lend a welcome level of commitment to all of the deranged actions they partake in.

The true standout in terms of acting has gotta be Barry Keoghan, who plays the complete opposite of his saintly character from Dunkirk. Here, Keoghan depicts Martin is a highly entertaining way that mirrors Jesse Plemons performance on Breaking Bad in how he portrays Martin as having a recognition of how human beings are supposed to typically behave, but anytime he tries to imitate such actions, there's a creepy level of artificiality to it. He's always able to emanate a level of off-kilterness that's occasionally intentionally humorous, other times menacing and always thoroughly remarkable to watch.

In addition to getting high-profile actors to portray all of their demented visions, Lanthimos and cinematographer Thimios Bakatakis shoot The Killing of a Sacred Deer in a visually rich manner meant to juxtapose a classy visual style against the movies various repulsive acts of violence and suffering. Similar to Phantom Thread, I'd freely admit my enjoyment of The Killing of a Sacred Deer may just stem from watching all of the chaos unfold before my pupils, but also like Phantom Thread, there's enough craft going on here to make me feel confident in saying that's not the case. Even though it doesn't reach the heights of The Lobster, The Killing of a Sacred Deer is further proof that embracing total madness is something Yorgos Lanthimos is able to do as a filmmaker with commendable skill.
Posted by Douglas Laman (NerdInTheBasement) at 12:34 PM