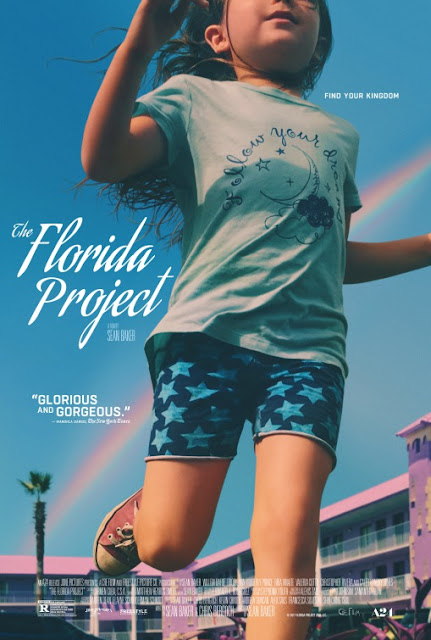 There are two worlds constantly at war with each other in The Florida Project. The first of these worlds is that of the world of childhood, the other is the world of adulthood. In the world of childhood, especially in the summertime period of the year that The Florida Project takes place in, the greatest concern a child has is what exactly kind of fun they can get into next. The residents of the world of adulthood try their hardest to shield the children from fully grasping all of the horrors in our world. Though exceptions exist, young children only get the faintest glimpses of the financial struggles and other problems their parents go through to ensure they have basic necessities like a roof over their head.


The viewer gets to see both of these worlds with astounding perspicacity in The Florida Project, a feature which chronicles six-year-old Moonee (Brooklynn Prince) as`she goes about her summertime living at the Magic Castle, a motel in Florida located not too far away from Disneyland. Whereas Disneyland offers a realm of escapism, the Magic Castle is a place of harsh reality, one whose various rooms are occupied by cash-strapped human beings like Moonee's mom Halley (Bria Vinaite) trying their hardest to get the money necessary to pay the rent. Moonee is mostly ignorant of the penury around her, she just see's the Magic Castle and other nearby locations as places where she can get into mischief with her friends.

That's not true for her Mom, who is all too aware of the harsh troubles that the realities of adulthood. The same can be said for the manager of the Magic Castle hotel, Bobby Hicks (Willem Dafoe), who has to deal with all kinds of problems in his everyday life, some of them spurred into existence by Moonee and her friends. The worlds of childhood and adulthood at first play as mostly separate entities in The Florida Project, with the opening scene of the motion picture demonstrating this tendency explicitly as Moonee and her friends spit on a woman's car much to their own delight, while the owner of the car looks on in horror at what these kids have done to her vehicle. In this scene, the children see a chance for rambunctious fun while the adult see's what the action is, an example of clear-cut property damage.

As the story gradually goes on, the two worlds do begin to interact more and more as seen in the brilliant recurring filming technique of placing the camera right at a child's eyeline right behind a child as they watch a situation involving adults that this youngster can't fully comprehend. The camera puts the viewer right there next to the child as they stand in the middle of a scenario too scary, too unpredictable and too confusing for them to fully grasp. Other films may use the perspective of children to create wistful innocent, but Sean Baker's The Florida Project instead uses this element as a way to create tragedy as Moonee tries to live out her childhood while being oblivious to her mother's steadily worsening financial situation.

As reality begins to creep in more and more into Moonee's life (a process kicked off by herself and her friends messing around in an abandoned shack), The Florida Project begins to develop this woeful spirit as the characters, who are subtly turned into fully-realized people through the course of mundane character-building sequences, begin to experience all kinds of hardship. This is especially true of Halley, Moonee's mother and a realistically complex person. Over the course of this story, we come to discover that she's a complex human being capable of both earning disdain and empathy from the viewer. She's the kind of person who uses her child to help sell discount perfume at high prices to tourists while also demonstrating a lack of discipline as a parent in how she constantly laughs off her child's recurring instances of bad behavior.

At the same time, she's also a person who clearly loves her kid and is obviously trapped in massively challenging financial situations that nobody can break out of with ease. The Florida Project is not looking to classify its main characters into easy categorizations of good or bad (save for maybe Willem Dafoe's landlord, who typically serves as the sort of affable everyman Jimmy Stewart might have played had this been made in the mid-20th century), rather it wants to create realistically complex figures out of the kind of everyday people that typically don't get movies made revolving around their lives and struggles. Typical "poor people" in Hollywood movies still reside in houses that the characters of The Florida Project can only dream of having. In The Florida Project, we have stark portraits of the financially challenged, the ones who have to sell iPad's to meet that month's rent, the ones society will typically write off as "lazy" without ever looking at them as human beings.

Filmmaker Sean Baker, on the other hand, clearly wants to tell stories from this vital perspective and he injects humanity into a population usually reduced to caricature by utilizing the aforementioned differing perspectives of a child and an adult to get inside the characters heads. By the end of The Florida Project, one gets to feel like they fully understand Moonee, Halley and Bobby and their world which is beautifully realized through outstanding camerawork. Shot on 35mm film, there are some ingenious shot choices that work incredibly well in making the world of The Florida Project feel like a, well, world, most notably an early wide shot showing the numerous residents of the hotel reacting to the power going out. It's here that we get to see just how many people are living in this hotel, each with their own stories and their own grievances to voice. Sean Baker doesn't want the camera to miss a single soul at this hotel, they all have value and that's why this moment is framed in as wide of a shot as possible.

Just like how Sean Baker's debut movie Tangerine captured instantly unforgettable performances from the two newcomer actors playing its lead characters, The Florida Project also garners remarkable work from newbies to the world of on-screen performances. Brooklynn Pierce is terrific as Moonee, with her intentionally imperfect speaking patterns that have her interrupting people and constantly leaving thoughts unfinished evoking the actual vocal traits of children impeccably. Making her very first screen credit here is Bria Vinaite, who is an outright revelation as Halley. Her performance instantly makes Halley recognizable as the type of human being we've all met while Vinaite handles the moral complexities of the character with incredible skill. And as for Willem Dafoe, every word of praise you've heard about this performance is so true, Dafoe plays a character unlike any other in his vast filmography and he does so with tremendous success.

This trio of actors does an incredible job working with both the world of childhood and the world of adulthood, the two elements that drive The Florida Project above all others. In the harrowing final ten minutes of the film, the two worlds collide in a heartbreaking fashion that concludes in a widely divisive shot that felt like the perfect capper to the story in my book. That's far from the only sequence in The Florida Project that's managed to lodge itself into my cranium for days after watching the movie of course, there's plenty here that manages to be impressively memorable. This is a phenomenal motion picture, one whose heavy uses of empathy and sublime filmmaking make ordinry yet oft-forgotten lives mesmerizing to watch.
Posted by Douglas Laman (NerdInTheBasement) at 5:17 PM