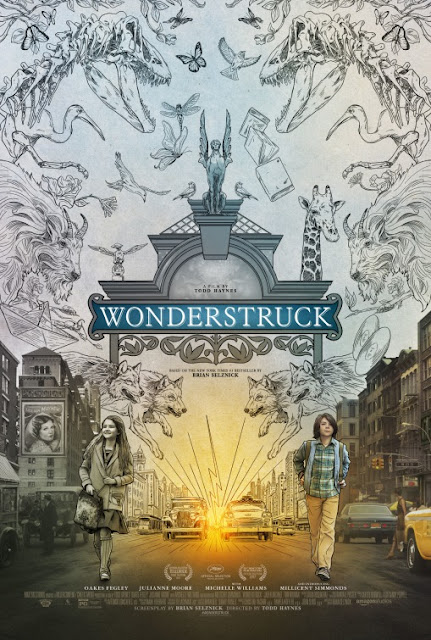 For years, the norm was that books adapted into movies were typically brought to the silver screen with minimal, if there was any at all, assistance from the author of the original text. Perhaps because of long-time dissatisfaction with how these works were adapted or perhaps as a way to mimic the success Marvel Comics had with taking control of film adaptations of their own characters, authors like Mark Millar, Seth Grahame-Smith and especially Patrick Ness (who adapted his own books A Monster Calls and Chaos Walking for the big screen) have recently become more involved in how their works become translated to the world of cinema.


A recent example of this trend is Brian Selznick, who adapted his 2011 novel Wonderstruck into screenplay form when it came time for a film adaptation. The task of directing such a feature adaptation fell to Todd Haynes, director of my favorite movie of 2015, Carol. The plot the two men bring to life here is a pair of tales about deaf children, with each taking place in separate decades. The first of these stories is about Ben (Oakes Fegley), a young boy in 1977 whose chance encounter with a bolt of lightning renders him without the ability to hear. Ben has been determined to find his father for years, and now that his mother, Elaine (Michelle Williams), has passed away, he finally decides to head off to New York City to find the dad he never knew.

Our other story takes place fifty years prior in 1927 as Rose (Millicent Simmons) makes her own quest to New York City to find her mother, a famous movie star by the name of Lillian Mayhew (Julianne Moore). Linking the pair of stories, beyond their protagonists being young deaf individuals, is that they're both tales about children carrying a desire to have a parental figure who cares about them and then proceeding to take that desire into their own hands by setting out on a trek to the Big Apple on their very own. Several key differences exist between these parallel storylines though, namely in the visual style in which Rose's story is told.

In perhaps the best aspect of Wonderstruck overall, all of the scenes set in 1927 are done in black-and-white and devoid of dialogue, a way to channel the look and feel of silent films of the era. The actors are all doing performances full of broad physical gestures to convey their emotions that feel straight out of old silent features while Carter Burwell's score similarly echoes the orchestral music found in silent movies beautifully. This carefully constructed homage to cinema of the past is executed with a clear attention to detail that pays off in dividends, these sequences are absolutely wonderful to watch and beyond just showing obeisance to groundbreaking movies of the past, these visual touches help make sure Rose's story has its own distinct identity.

Ben's tale (which is told in color and with sound) is certainly the weaker of the two stories and not just because of how it compares to the carefully realized veneration for silent movies found in Rose's tale. Ben and his life feel too loosely defined to get emotionally invested in, mostly because so much of his identity and life are shrouded in mystery. Oakes Fegley continues to be the talented young actor he was in Pete's Dragon, but the plotline he headlines here feels like it lacks the key storytelling pieces meant to get us invested in Ben's plight. Michelle Williams feels oddly underused as his Mom in what amounts to a cameo, though admittedly, her lack of screentime can be chalked up to how this is not her story.

Wonderstruck is instead the story of Ben and Rose, and the way these two plotlines end up converging is mighty impressive and leads to one of the best scenes of the movie where secrets of Ben's past are revealed via little stick figure dolls that wouldn't be out of place in a Wes Anderson movie. These stretch of the story also allows for Julianne Moore to deliver some of her best dramatic acting in a blue moon, her work in this part of Wonderstruck responsible for a lot of why this part of the plot works so well. Getting to this sweet finale does involve wading through clunky execution of key parts of Ben's storyline but at least Wonderstruck ends on a sweet note that leaves one feeling the movie is, though not wonderful, still emotionally satisfying.
Posted by Douglas Laman (NerdInTheBasement) at 11:47 AM