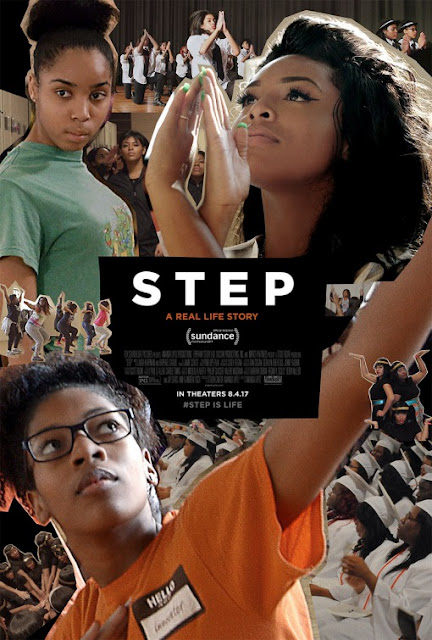 How was Step not a bigger deal in its theatrical release back in August 2017? I know documentaries typically struggle to garner mainstream approval at the domestic box office but the film itself is like the coolest inspirational sports movie premise that actually happened! One gets to witness real people struggle in their pursuit of an education and then find varying individual forms of triumph! It's a fascinating feel-good piece of cinema that totally feels like it could have been a major word-of-mouth phenomenon with the proper marketing. Even if it didn't get the reception it should have received in its theatrical release, I am here to tell you today that Step is indeed an awesome uplifting movie.

The real-life tale that Step chronicles concern a group of women who are all a part of the very first senior class at an all-girls Baltimore High School as well as participants in the school's Step program, a dance course that has the school's Step member participating in competitions with other high schools. Such competitions are already a source of intense pressure but that's far from the only place that the various students of this school have to face. Many of these girls are coming from homes that are struggling to make ends meet financially and are raised by parents who will do anything to ensure their children have a bright future.

Though we get to meet a number of the girls who embark in this Step program, the one whose story becomes the main focal point of the movie ends up being Blessin Giraldo. She's got major ambitions for her future, but her struggling academics are making it difficult for her to strive towards turning those aspirations into actual tangible realities. We get to follow her own ups and downs across her Senior Year as well as the same kind of events experienced at this school over an eight to nine-month long span of time which is punctuated by frequent showcases of the school's Step program participating in rigorous competitions.

That extended stretch of time in the lives of these High School seniors provides plenty of captivating drama for director Amanda Lipitz to chronicle. Over the course of a single feature film (one that doesn't even clock in at 85 minutes with credits) one gets a complete feel for the world these characters inhabit and the people that play such crucial roles in their lives. This is especially true of sequences centered on Blessin Giraldo, whose complicated relationship with her mother as well as the way she's handling her families financial issues, providing some of the most quietly devastating moments of the entire movie.

Similarly impactful is a scene where the instructor for the school's Step program takes her students to a memorial dedicated to Freddie Gray, a 25-year-old Black man killed in April 2015. His death attributed by many to race-based police brutality, conversations about these ongoing horrific murders of people of color tend to become such large-in-scale conversations that it can be easy to forget about the normal everyday people affected by these tragedies. In this scene. the voices of young women living in the same community that Freddie Grey used to reside in are heard as they express their dissatisfaction with how the rest of the world perceives their city via news footage. This is the kind of circumstances they have to live alongside every day and why these students look for unity and security amidst the bond of sisterhood formed in the Step program.

That program itself provides some of the most engrossing sequences of Step as we get to see these dancers perform elaborate routines that produced plenty of reactions of "WOAH!" from me. The camerawork to capture these performances is well-done while it's commendable how Step as a movie balances out these extensive dance sequences with the more small-scale drama informing the lives of the dancers without having either element overwhelm the other. After all, it's because of how engaging all of the home-life strife that the lead characters of Step go through that makes the dance segments as well as the more trumphant moments in the story all the more enriching to experience.
Posted by Douglas Laman (NerdInTheBasement) at 7:36 PM