Den of Thieves Is The High School Musical Of Heist Movies 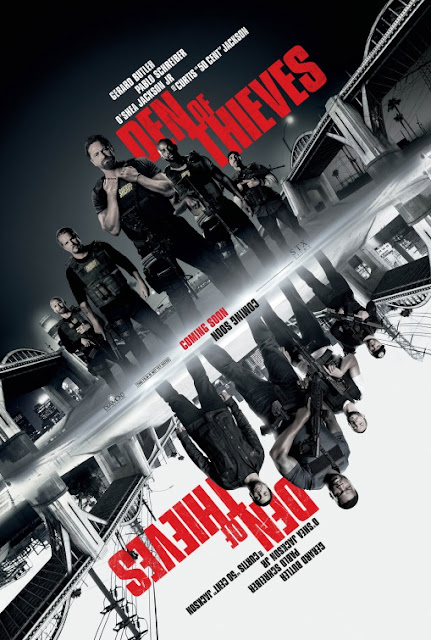 In the eleven years since 300 made Gerard Butler a superstar complete with an iconic catchphrase ("THIS! IS! SPARTA!"), I've never found him to be a particularly memorable actor. I don't mean this as a slight against Butler as a person (he seems friendly enough in interviews, never heard of any scandals associated with him), but as an actor, he always comes off as generic and wooden. Sans his surprisingly effective voicework in the How To Train Your Dragons movies, there's no trace of personality or energy to be found in his turns in movies like Olympus Has Fallen, Geostorm or Gods of Egypt. With all that in mind, imagine my shock upon watching Den of Thieves and thoroughly enjoying his manic turn as a bad cop who seems to have always just come back from snorting immense amounts of cocaine.


That bad cop is named Nick O'Brien and he's on the hunt for a group of criminals who are pulling off elaborate heists. He manages to pick up the driver of this group, Donnie (O'Shea Jackson Jr.), who, caught between a rock and a hard place, now serves as an informant for the cops on what kind of shady plans the group is putting together. Donnie's boss, Ray Merrimen (Pablo Schreiber), is meanwhile putting together a big o'l plan for himself and his cohorts to become the very first people in history to rob the Federal Reserve. It's an elaborate scheme, one that Nick is planning to stop and one that Donnie is caught in the middle of. Who will make it out alive after entering this...Den of Thieves?

Looking back on Den of Thieves, it's remarkable how much of it's plot prior to the big third act heist sequence is centered around individual vignettes that don't have much to do with one another, particularly all of Nick's personal problems which end up feeling extraneous. We see Nick and his wife break up which is followed up later by a scene showing Nick dramatically signing the divorce papers, we see Nick run into Donnie at a Chinese food eatery (which Nick makes a point to emphasize he only comes to "for the ASS") and we also get to see 50 Cent (who plays one of Donnie's buddies in the crime world) intimidate his daughter's prom date. What do all of these scenes add up to in the long run? Not much really, especially the scenes detailing personal lives for individual characters which don't end up factoring into anything significant in the plot.

That being said, many of the individual segments are surprisingly fun to watch mostly because of how Gerard Butler decides to play O'Brien. This is a cop whose written to have a wry sense of wit akin to Robert Downey Jr. as Tony Stark, but since Butler doesn't seem to have the sharp timing of that actor, he decides to play the character more like a frenzied energetic Nicolas Cage performance with the occasional bit of "What was that?" line readings that wouldn't be out of place in a Tommy Wiseau performance. From the first scene onward where Butler grabs a donut from the ground of a crime scene and then, after consuming said donut, licks his fingers, Butler establishes that he's going whole-hog ham with this role and he plays it surprisingly well.

Also helping to separate this from other action heist movies of its ilk is that they've got O'Shea Jackson Jr. playing the lead. Anyone who's seen Straight Outta Compton or especially Ingrid Goes West knows that this guy is super talented and thankfully, Den of Thieves actually allows O'Shea Jackson Jr to use those talents of his frequently. Admittedly, no one else in the cast, sans maybe Pablo Schrieber, really lands much of an impact (any of Gerard Butler's cohorts are all forgettable), but at least O'Shea Jackson Jr. and especially Gerard Butler are giving far more effort in their performances than expected.

Christian Gudegast's screenplay (Gudegast is also directing here), thankfully, isn't afraid to incorporate some more goofy elements, like Nick O'Brien himself, into the story, even if the dialogue has a tendency to seem like it's straining way too hard to be edgy. A third act involving Donnie and company executing their big heist is actually a lot of fun to watch but I wish it didn't culminate in such a generic shootout sequence that lacks the kind of creativity that the best scenes of Den of Thieves rely heavily on. That creativity helps keep Den of Thieves surprisingly fun to watch even if it's overall a heavily messy affair in terms of story structure. Of all things, Den of Thieves echoes High School Musical in that both movies mine some diverting entertainment out of recognizing exactly what they are and then proceeding to do a fun version of what exactly they are. Neither are all that substantive, but their ability to embrace being silly makes them fun to watch. Plus, both features have a scene-stealing over-the-top turn that makes the whole film, with Gerard Butler in Den of Thieves serving as the parallel to High School Musical's Lucas Grabeel.
Posted by Douglas Laman (NerdInTheBasement) at 1:08 PM