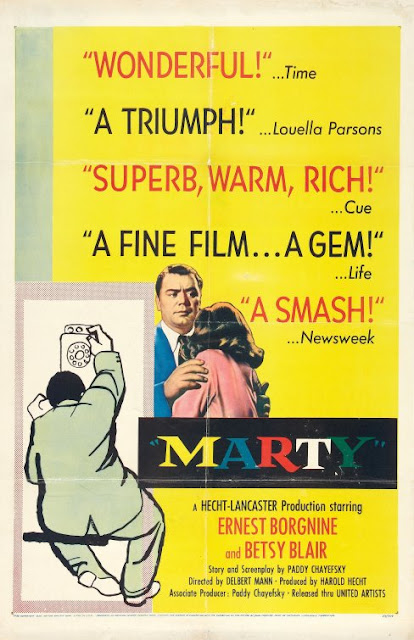 For my generation (read: anyone born after 1990), Ernest Borgnine is likely most recognizable for his work on SpongeBob SquarePants as Mermaid Man, a geriatric superhero the lead characters of that show adore. Borgnine did some terrifically humorous vocal work on that show as he fought the forces of E.V.I.L., so it's no wonder that he's so well-known for that role, but that was far from Borgnine's only work as an actor. The guy was working steadily as an actor from 1951 all the way up to the year of his death, 2012. His first major leading role in a motion picture, and perhaps his most iconic performance of all, came in the 1955 Best Picture winner Marty.


Borgnine portrays the titular lead character who leads a simple life working at a butcher shop that he hopes to acquire in the near future. Part of his life being so simple stems from Marty being a bachelor, something that draws the ire of numerous people around him who wish he, being a man in his mid-thirties, would finally get married. Marty, however, has found nothing but trouble navigating the dating scene and has no desire to pursue a lady, much to the chagrin of his mother Ms. Piletti (Esther Minciotti), who, on one Saturday night, insists that Marty attend a local dance hall where one can find plenty of single women.

A reluctant Marty heads off to this dance hall and at first, he just finds himself once again alone. But then he runs across a woman by the name of Clara (Betsy Blair), who has her own set of problems in pursuing relationships. Men around town consider her "homely-looking" and undesirable, to the point that a guy who's taken her to this dance hall tries to pay Marty to take her off his hands. Rejecting the man's proposition, Marty strikes up a conversation with Clara and the two have a delightful Saturday night, one that is populated by heavily entertaining dialogue penned by Paddy Chayefsky (whose adapting his own teleplay into a screenplay here).

Marty as a whole movie is thoroughly enjoyable but the sequences showing Marty and Clara just engaging in conversation is the high point of the entire movie. Factors like Marty rambling on in a fit of nerves ("There I go, talking again!") makes their exchanges realistically unpolished, it feels like we're watching two actual people interacting with one another rather than an overly pristine vision of what budding romance looks like. Their scenes are endlessly sweet (only a moment where Marty tries to coerce a kiss from Clara briefly interrupts the sweetness) and if you told me there was a four-hour cut of this motion picture dedicated solely to these two talking to one another, I'd happily watch it in a heartbeat.

Of course, the performances from the two lead actors are an important factor in making the crucial conversation scenes between Marty and Clara as engrossing as they are. Betsy Blair reminded me of a mid-20th-century version of Sally Hawkins in how she's able to play a soft-spoken human being that's still able to communicate volumes in her line deliveries and body language. She has excellent chemistry with Ernest Borgnine, who himself also delivers a sterling lead performance. Borgnine is especially skilled at making Marty express his own internal reservations with returning to the dating scene without making Marty seem like an overly "woe-is-me" character. Instead, he makes this guy a realistically vulnerable human being you get immediately dramatically invested in.

The cast is working under the direction of filmmaker Delbert Mann, who shows a remarkable gift for knowing how to make a small-scale dialogue-heavy motion picture subtly impressive on a visual level. This is particularly true in the choice of blocking, which can be seen quite clearly in the scene where Marty is asking his troubled cousin, Tommy (Jerry Paris), whose in the middle of an argument with his wife, Virginia (Karen Steele), for financial advice on his porch. Here, wider shots are predominately used so we can see all three characters and their individual reactions throughout the scene at all times. Marty is constantly placed in a manner that makes it clear he's trying to wedge himself in between this squabble between two people while we can usually see Tommy and Virginia's reactions when the other one speaks about them, rarely is either one of the duo isolated from the other on a visual level just as, in this movie's world, they can't be separated now that they've committed to a marriage together.

There's plenty of other instances of clever blocking and camerawork scattered throughout Marty (with another good example of the superb blocking specifically being in the arrangement of characters when Marty is commenting on the dilapidated condition of his mom's house) that are almost as memorable as the film's final scene where Marty delivers an iconic monologue refuting his shallow friend's thoughts that sends one's spirits soaring. I'm a sucker for a well-done movie romance and good gravy does Marty have one of those! My generation may know Ernest Borgnine primarily as an underwater superhero, but hopefully more people belonging to that generation also become familiar with his phenomenal work in Marty!
Posted by Douglas Laman (NerdInTheBasement) at 12:09 PM