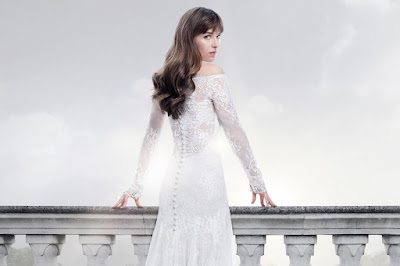 The time has come for the Fifty Shades of Grey movies to follow Harry Potter, The Hunger Games and Twilight into the popular book adaptations goodnight. Such a conclusion came in the form of Fifty Shades Freed, which opened to a decent $38.6 million. That's 15% below the opening weekend of Fifty Shades Darker and about 54% below the opening weekend of the very first Fifty Shades of Grey movie, but that's still a decent bow for a movie that cost only $55 million to make. The trilogy itself has now crossed $1 billion in worldwide box office grosses, making this quite the impressive moneymaker for Universal. Now to see if this new Fifty Shades movie manages to crack $100 million. If it holds like it's predecessor, it'll narrowly miss it but don't count out Anastasia Steele and co. yet.

Fellow new release Peter Rabbit became the second straight family movie hit for Sony/Columbia as it grossed $25 million this weekend. Not too shabby of an opening at all and amongst other similar family movies starring talking animals, that was a bow on par with the $25 million debut of Dr. Dolittle 2 and slightly ahead of the opening weekends of Alvin And The Chipmunks: Chipwrecked and Garfield: The Movie. Though not as big of an opening weekend as the ones seen by recent pre-President's Day Weekend family movies like The LEGO Movie or The SpongeBob Movie: Sponge Out Of Water, for a $50 million budgeted movie, this was a fine debut for Peter Rabbit that indicates it'll have a fine domestic run ahead. Look for this one to hit at least $80-85 million domestically, which would be enough to make it one of the biggest movies ever for Sony Pictures Animation.

Clint Eastwood's new movie The 15:17 To Paris did only so-so in its opening weekend as it grossed only $12.6 million over the frame. That's the sixth-biggest opening weekend ever for one of Clint Eastwood's movies that started out in wide release (as opposed to films like American Sniper that started out in limited release before expanding into wide release), but it's a bow well below the likes of 13 Hours or 12 Strong. A B- CinemaScore also doesn't bode well for its legs in the future and it's likely this one ends its domestic run in between $30 and $35 million, an only average haul for a movie with a $30 million budget.

Now, onto the holdovers. Jumanji: Welcome To The Jungle had a phenomenal hold this weekend, especially considering its own studio, Sony/Columbia, was releasing a new family movie (Peter Rabbit) over this weekend. Going down only 10%, Jumanji grossed another $9.8 million for a $365.6 million domestic haul. Is this one gonna manage to crack $400 million domestically? We shall see folks. Also continuing to hold incredibly well was fellow Christmas 2017 sleeper hit The Greatest Showman, which dipped a tiny 17% to gross another $6.4 million for a domestic total that now stands at an amazing $146.5 million. In its third weekend, Maze Runner: The Death Cure grossed another $6 million, a 42% drop from last weekend, for a domestic total of $49 million while Winchester fell 45% in its second frame to add $5 million to a domestic haul that now stands at $17.1 million.

The Post went down 33% to gross another $3.5 million for a domestic total of $72.8 million. Fellow Best Picture nominee The Shape of Water eased 32% for another $3 million, giving it a domestic haul of $49.7 million. Tomorrow, it'll crack $50 million, becoming only the ninth movie ever from Fox Searchlight to make over $50 million domestically. Rounding out the top ten was Den of Thieves, which dropped a decent 37% this weekend to gross another $2.8 million for a $40.9 million domestic haul, setting this one on course to become the biggest movie ever for STX Films that isn't a part of the Bad Moms franchise. 12 Strong dropped 42% for a $2.7 million fourth weekend and a domestic haul that now stands at $41.9 million. In its third weekend of wide release, Hostiles grossed $2.6 million (a 48% drop) for a domestic total that now stands at a solid $25.8 million.

The Top 12 movies this weekend grossed a total of $118.9 million, down about 38% from this same weekend last year when The LEGO Batman Movie topped the box office.
Posted by Douglas Laman (NerdInTheBasement) at 1:06 PM