Mute Silences All of It's Potential 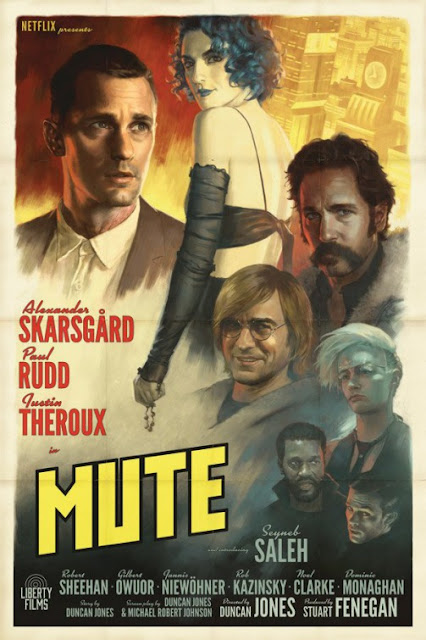 In their 28 month long period of doing feature films, Netflix has released a bunch of high-quality smaller-scale films like The 13th, Blue Jay and Mudbound that show the streaming service is quite capable of putting out some top-notch cinema. If only such quality extended to their attempts to release more high-profile blockbuster fare, as those (admittedly few) attempts have fared quite poorly. Bright was, of course, a disaster and now comes another subpar bigger-budgeted effort from the studio in the form of Mute, which hails from director Duncan Jones, a man responsible for two of the best science-fiction films (Moon and Source Code) of the last decade.

Mute is a major step down in quality from those two and a puzzling movie to contemplate in terms of how exactly it fails to live up to it's potential. First and foremost in terms of issues Mute suffers from is how the film is structured as it tries to tell two stories at once. This is far from an impossible feat for a movie to pull off, but Mute stumbles mightily in trying to pull it off. Our primary plot is Leo (Alexander Skarsgard), who was rendered mute as a child during a boating accident. As an adult living in a futuristic version of Berlin, Germany, he tries to make a living as a bartender with his girlfriend Naadirah (Seyneb Saleh). The two have a lovely relationship but everything gets turned upside down for Leo once she goes unexpectedly missing.

At the same time, we also follow Cactus Bill (Paul Rudd), a surgeon whose working for unsavory mob types in an attempt to get passports and other documents necessary to get him and his daughter to America. While Cactus Bill goes about his life trying to keep things together, Leo goes on a hunt for clues regarding where exactly Naadirha has gone in his own little science-fiction noir. The search for answers quickly becomes tedious as Leo keeps running into people and locations that end up blending together all too easily. They're all just a horde of sexually scandalous or disreputable gangsters who are brought to life with little in the way of imagination. The presence of a robot penis is the most memorable part of this hunt for answers.

It's a pity too that Leo's search for the truth doesn't utilize any of his core character traits established in early scenes of Mute. Leo grew up in an Amish community and has carried a distaste for using any kind of technology into his adulthood that takes place in a futuristic technology-soaked world. There's a fascinating dichotomy in there that Mute never really. Alexander Skarsgard, a talented actor in films like The Diary of A Teenage Girl, also seems to be struggling to play this character as he keeps going to repetitive acting choices like constantly using the same sad-puppy-dog eyes for his characters facial expressions that end up making Leo a dull character. The ability to eschew dialogue can open up interesting possibilities for an actor and Skarsgard is never given the chance to make use of those possibilities.

If Leo's noir storyline is a mess of squandered potential though, Cactus Bill and his antics prove to be just a mess out and out. Aside from some details like how Cactus Bill rolls around in a vehicle painted like the American flag, the adventures of Cactus Bill prove to be not all that interesting, he's just a mustached jerk who constantly chews gum and spews insults at people and his schtick becomes old hat quite fast. This storyline is especially grating since it opens the door for a disturbing subplot involving Justin Theroux as a pedophile pediatrician that has absolutely no bearing on the story. There are some story elements of Mute that I can see as having potential on a conceptual level but I have no idea why this revolting aspect of the plot was kept in the film.

Mute's third act has the two storylines meet up in a manner that isn't satisfying enough to compensate for the lackluster structure of the rest of the film. The final twenty or so minutes of the film especially drag as the story seems to just be coming up with ways to stretch out the plot simply for the sake of boosting the runtime. Though the sets are pretty to look at (a vision of how libraries may be slightly tweaked in the future was cool), Mute puts such lovely visuals to work on a story that's in total disarray and wastes any potential its story and lead character have. Here's to hoping both Netflix and especially director Duncan Jones do better larger-budgeted movies than Mute in the future.
Posted by Douglas Laman (NerdInTheBasement) at 1:22 PM